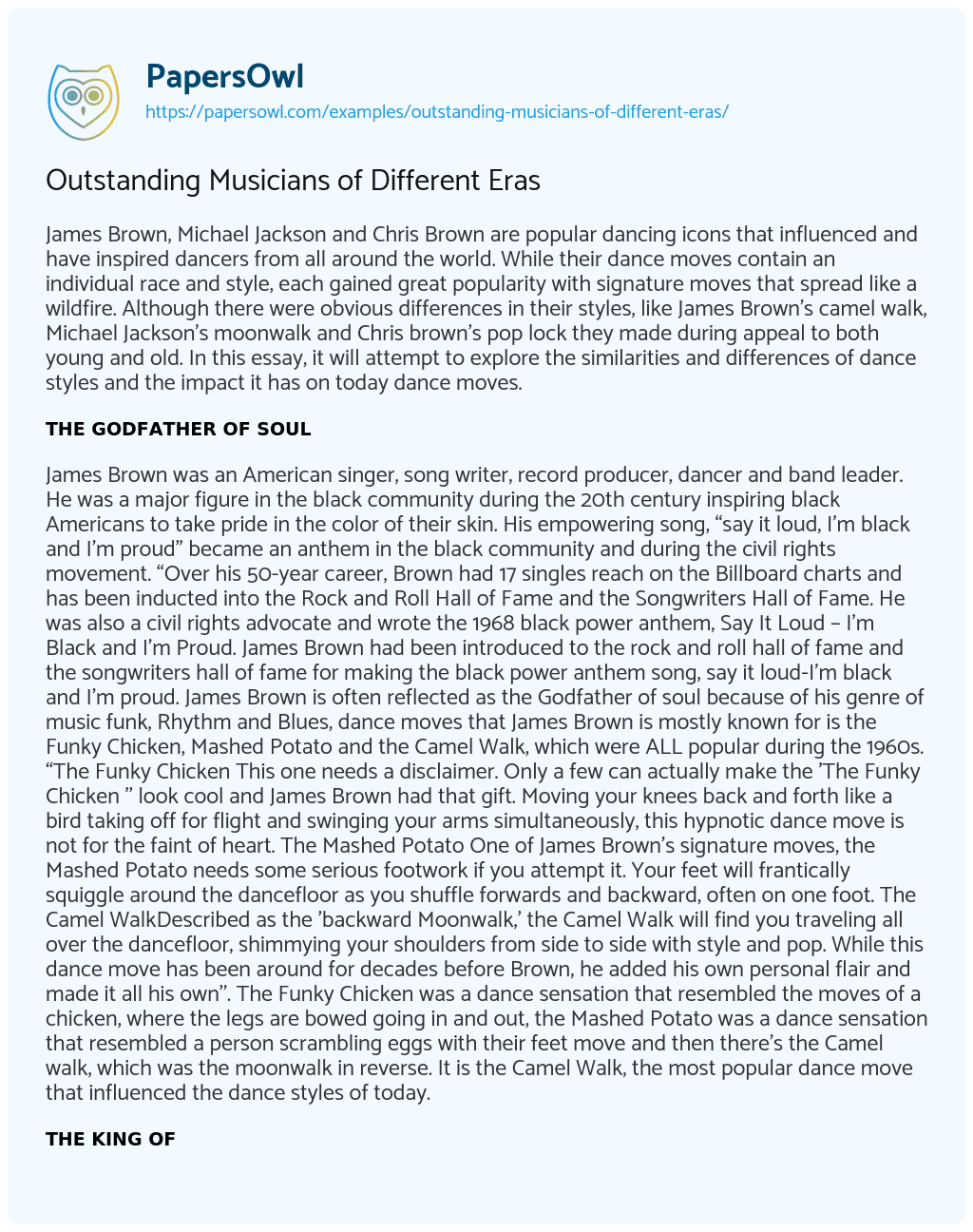 James Brown, Michael Jackson and Chris Brown are popular dancing icons that influenced and have inspired dancers from all around the world. While their dance moves contain an individual race and style, each gained great popularity with signature moves that spread like a wildfire. Although there were obvious differences in their styles, like James Brown’s camel walk, Michael Jackson’s moonwalk and Chris brown’s pop lock they made during appeal to both young and old. In this essay, it will attempt to explore the similarities and differences of dance styles and the impact it has on today dance moves.

THE GODFATHER OF SOUL

James Brown was an American singer, song writer, record producer, dancer and band leader. He was a major figure in the black community during the 20th century inspiring black Americans to take pride in the color of their skin. His empowering song, “say it loud, I’m black and I’m proud” became an anthem in the black community and during the civil rights movement. “Over his 50-year career, Brown had 17 singles reach on the Billboard charts and has been inducted into the Rock and Roll Hall of Fame and the Songwriters Hall of Fame. He was also a civil rights advocate and wrote the 1968 black power anthem, Say It Loud – I’m Black and I’m Proud. James Brown had been introduced to the rock and roll hall of fame and the songwriters hall of fame for making the black power anthem song, say it loud-I’m black and I’m proud. James Brown is often reflected as the Godfather of soul because of his genre of music funk, Rhythm and Blues, dance moves that James Brown is mostly known for is the Funky Chicken, Mashed Potato and the Camel Walk, which were ALL popular during the 1960s. “The Funky Chicken This one needs a disclaimer. Only a few can actually make the ‘The Funky Chicken ” look cool and James Brown had that gift. Moving your knees back and forth like a bird taking off for flight and swinging your arms simultaneously, this hypnotic dance move is not for the faint of heart. The Mashed Potato One of James Brown’s signature moves, the Mashed Potato needs some serious footwork if you attempt it. Your feet will frantically squiggle around the dancefloor as you shuffle forwards and backward, often on one foot. The Camel WalkDescribed as the ‘backward Moonwalk,’ the Camel Walk will find you traveling all over the dancefloor, shimmying your shoulders from side to side with style and pop. While this dance move has been around for decades before Brown, he added his own personal flair and made it all his own”. The Funky Chicken was a dance sensation that resembled the moves of a chicken, where the legs are bowed going in and out, the Mashed Potato was a dance sensation that resembled a person scrambling eggs with their feet move and then there’s the Camel walk, which was the moonwalk in reverse. It is the Camel Walk, the most popular dance move that influenced the dance styles of today.

THE KING OF POP

Michael Jackson was an American singer, song writer, dancer and actor. He was considered the king of pop and the greatest entertainer of all time. He was inspired by a lot of amazing people like Fred Astire and more importantly, James Brown. The move that Michael Jackson is known for the most is the back slide also known as the moonwalk, which was invented by Jeffrey Daniels, an American dancer, singer-songwriter and choreographer, most notable for being a founding member of the R&B vocal group Shalamar, who taught it to Michael Jackson when he was really young “Dancer and singer Jeffrey Daniel was a member of the R&B group Shalamar and pioneered the dance move the backslide — which, after he taught it to Michael Jackson, became known as the moonwalk”. Years after Michael Jackson had learned the back slide, he was asked by Barry Gordy, founder of Motown, who managed and produced him and his brothers, The Jackson 5 and later The Jacksons, to perform at the televised Motown 25th Anniversary on March 25 1983. Michael had accepted to do the performance with his brothers as long as he had a solo spot in the performance. Michael jackson was given his solo spot in the performance and he performed Billie Jean, a song he wrote on his Thriller album. The audience went into an uproar when Michael started doing the back slide, for the first time on nationwide television and on stage in public, the audience was blown away. “ On May 16, 1983, Michael Jackson appeared on the TV special Motown 25: Yesterday, Today, Forever, in which he debuted the ‘moonwalk’ during his performance of Billie Jean”. After Michael Jackson did this performance he made an autobiography changing the name from back slide to Moonwalk, and now all of the fans prefer the name moonwalk instead of back slide. If Michael Jackson never existed from 1958-2009, dance nowadays would not be more amazing than what it used to be.

Chris Brown is an American singer, songwriter, dancer and actor out right now. He is considered the best artist of the millenniums. Chris Brown’s career has seen many ups and downs due to his lack of self control and his abuse of women. Even though Chris Brown has been involved with the law and has been doing a lot of wrong doings, there are still a lot of fans and dancers that look up to him and his many talents. The move that Chris brown is known for the most is his pop locking, which was invented by soul train dancers The Electric Boogaloos, a street dance crew that is responsible for the spread of popping and locking from the 60’s to now. “Putting a fresh rhythmic and animated spin on locking, the Electric Boogaloos propelled popping and funk culture to the masses. Their signature style inspired new genres, such as creeping and tutting, as well as a long list of legends to hit the dancefloor – and in many ways outshone its locking predecessors”. Michael Jackson was one of the people to learn from the electric boogaloos style and Chris Brown accredited Michael Jackson for influencing him in his career and now from what Chris has learned from Michael he has upgraded pop and locking so much to the point where he has inspired people nowadays to do dubstep dancing, which is a dance style that is more wavyier and alot more robotic from old school robot dancing.

As singers, all three entertainers took elements of funk, soul, rhythm and blues, and crafted into their art of making music. They were also gifted dancers who were never taught professionally, the skill came naturally to all three. Each one also tried their hand in the acting world as well, with Chris Brown exceeding the other two. Each also had their personal woes and issues with the law, James Brown with tax issues, Michael Jackson with false child accusations and Chris Brown with female abuse. Although each entertainer is from a different era, James Brown, the silent generation, Michael Jackson the king of pop and Chris Brown, millennial, it remains clear Michael and Chris were greatly influenced by James Brown’s style of dance. Each will undoubtedly go down in history for their innovative and electrifying dance styles that will be copied by later generations as well.

A Tour of Five Eras Essay

A Tour of Five Eras