Research Paper on the Cave/Matrix 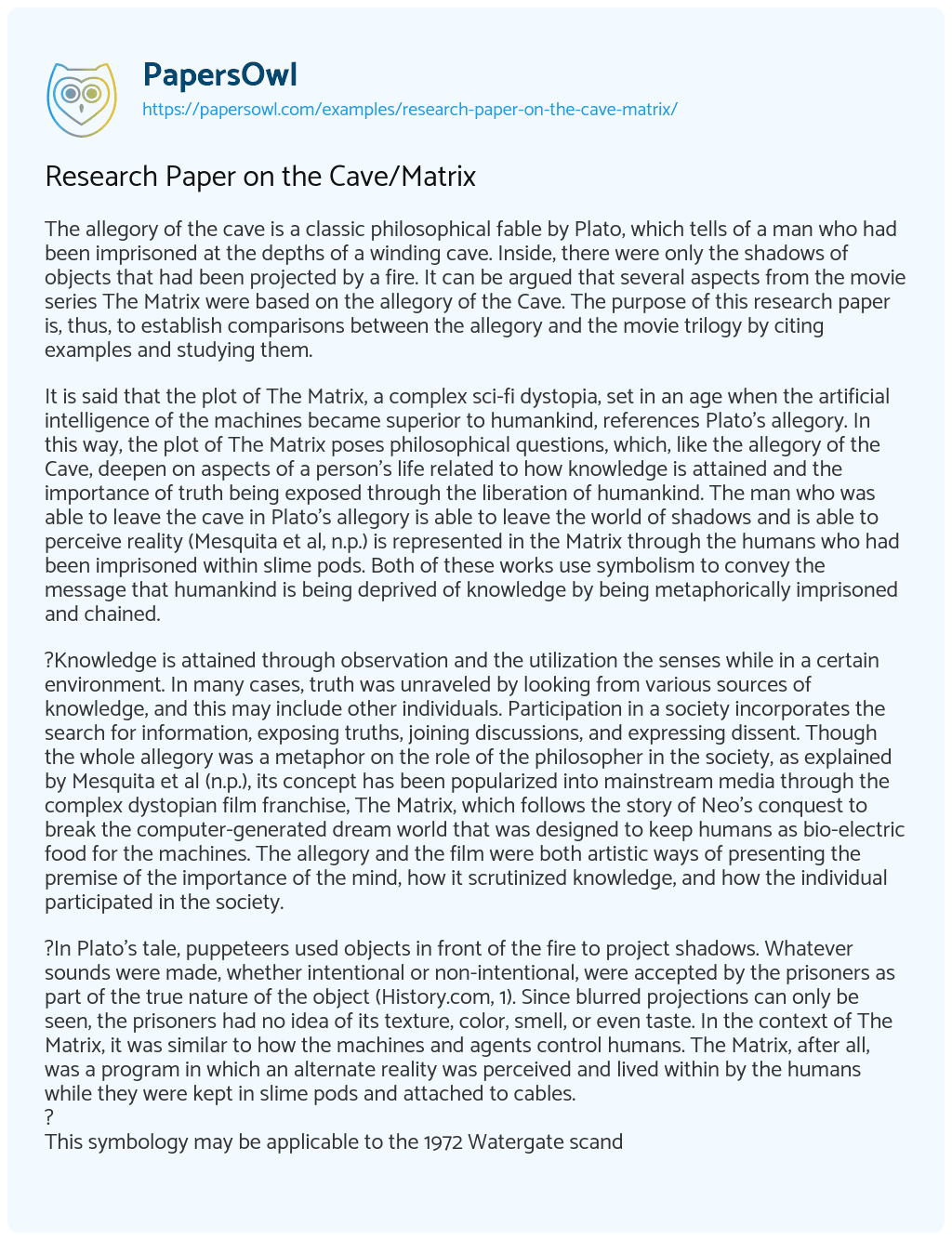 The allegory of the cave is a classic philosophical fable by Plato, which tells of a man who had been imprisoned at the depths of a winding cave. Inside, there were only the shadows of objects that had been projected by a fire. It can be argued that several aspects from the movie series The Matrix were based on the allegory of the Cave. The purpose of this research paper is, thus, to establish comparisons between the allegory and the movie trilogy by citing examples and studying them.

It is said that the plot of The Matrix, a complex sci-fi dystopia, set in an age when the artificial intelligence of the machines became superior to humankind, references Plato’s allegory. In this way, the plot of The Matrix poses philosophical questions, which, like the allegory of the Cave, deepen on aspects of a person’s life related to how knowledge is attained and the importance of truth being exposed through the liberation of humankind. The man who was able to leave the cave in Plato’s allegory is able to leave the world of shadows and is able to perceive reality (Mesquita et al, n.p.) is represented in the Matrix through the humans who had been imprisoned within slime pods. Both of these works use symbolism to convey the message that humankind is being deprived of knowledge by being metaphorically imprisoned and chained.

?Knowledge is attained through observation and the utilization the senses while in a certain environment. In many cases, truth was unraveled by looking from various sources of knowledge, and this may include other individuals. Participation in a society incorporates the search for information, exposing truths, joining discussions, and expressing dissent. Though the whole allegory was a metaphor on the role of the philosopher in the society, as explained by Mesquita et al (n.p.), its concept has been popularized into mainstream media through the complex dystopian film franchise, The Matrix, which follows the story of Neo’s conquest to break the computer-generated dream world that was designed to keep humans as bio-electric food for the machines. The allegory and the film were both artistic ways of presenting the premise of the importance of the mind, how it scrutinized knowledge, and how the individual participated in the society.

?In Plato’s tale, puppeteers used objects in front of the fire to project shadows. Whatever sounds were made, whether intentional or non-intentional, were accepted by the prisoners as part of the true nature of the object (History.com, 1). Since blurred projections can only be seen, the prisoners had no idea of its texture, color, smell, or even taste. In the context of The Matrix, it was similar to how the machines and agents control humans. The Matrix, after all, was a program in which an alternate reality was perceived and lived within by the humans while they were kept in slime pods and attached to cables.
?
This symbology may be applicable to the 1972 Watergate scandal which lasted during and after the re-election Republican Richard Nixon as US president. Journalists Bob Woodward and Carl Bernstein exposed the break in of former FBI and CIA agents at the Democratic National Complex at Watergate. Phone lines were listened to, and secret papers were stolen. It was found out that current President Nixon was involved, and even covered up and paid for the operation. Nevertheless, Nixon won the election against Democrat George McGovern. Evidence against the Nixon and the Watergate suspects became stronger as whistle blowers started to appear. Nixon resigned under the fear of being impeached in order to avoid legal scrutiny (O’Connell n.p.). In this way, the exposure of the truth allowed the citizens of the United States to leave their metaphorical cave and no longer perceive shadows, but real images.

?Upon seeing one of the objects behind the shadow, which were put under the sun, the freeman realized his supposed idea of the object had lain within the spectrum of truth and falsehood. Through bending the spoon with his mind, Neo had realized that perceptions of the idea of an object can be changed, hence the possibility of absence. This leads to the statement, “There is no spoon,” (The Matrix), which expresses Neo’s reaction when he was exposed to the truth. In this way, bot the allegory and the film invite people to question what they have assumed to be their reality, to dig deeper into it.

?An interesting topic of discussion in line with the allegory’s shadows is Gulf of Tonkin Resolution. On August 1964, two destroyer ships from the US Navy radioed that they had been fired by the Viet Cong fleet (US Department of State n.p.). This led to President Lyndon Johnson’s Congress request to increase military presence at Indochina. The Resolution was passed before a complete evaluation had been done on the incident. It was found out that no one was hurt and little damage was done. What had become more suspicious was the presence of American ships on the gulf and were attacked without provocation. In reality, US had been waging small secret wars since 1961. The actions made by the American government and military had triggered responses from the Viet Cong (Wernick and Atlas n.p.). According to the United States Department of State, a total of 58,220 American deaths were attributed, while 2 million Northern Viet Cong and at most 250,000 Southern Viet Minh were counted as fatalities (n.p). This signified a tragic event in the history of the United States.

?The freeman was dragged out of the cave onto to the sun lit mouth. A painful blindness was suffered due to the inexperience of the man to sunlight. Normal vision came back after some time. Looking through the lens of the Matrix, Neo became physically blinded. Since the way of the machines is not as strange to Neo, a new kind of sight was developed, and it didn’t require physical eyes.

This is comparable to the death of Pat Tillman, a former NFL star and military officer. On April 2004, it had become known that his platoon had received enemy fire while recovering from equipment breakdown. The report stated that casualties in the incident had included Tillman. Only after a month were the actual details of the death revealed. Tilman’s group had traveled through a ridgeline to assist Rangers under attack, and with them was an Afghan ally. The ally was misidentified as the enemy, and this led to serious repercussions such as Tillman’s death. It was uncovered that those targeting Tillman’s group were also Rangers. For Tillman’s loved ones, the transition from lie to truth was truly shocking (Neuman 2014). This shock is also exemplified both in Plato’s allegory and in the Matrix movies, as has been explained throughout this paper.

After spending much time out of the cave the freeman gained a whole new perspective, level of consciousness, and responsibility, which led him to go back to the cave. This messianic action is very similar to those of Neo. After being rebirthed into Machine reality, he explored his capabilities in the real world. Every contemplation, conflict, and sacrifice had led to the Truce with the Machines.
There are several chosen ones or heroes in modern society. One of the best examples is whistle-blower and computer security consultant Edward Snowden who risked his identity and personal security to expose the National Security Agency of the unconstitutional surveillance policies and methodologies of the United States (Government Accountability Project n.p). Meta data was collected outside federal and judicial laws n a global level. Snowden showed that the US government is exploiting the privacy of its citizens and other countries.

Plato’s allegory proves to be timeless as it is very relevant today, and elegant because of its pervasive and effective use of symbology. It was a very strong reference of The Matrix trilogy, as this paper describes, and throughout the films, the audience s challenged the audience to question the current state of authority. Both of these tales show that the individual is born into limitations set by the environment and manipulation. In this way, knowledge is ensnared by the senses, but only through agonizing liberation can the individual be set free, and it is the role of the liberated to liberate and empower as well.

“The Matrix” and “the Allegory of the Cave”

Interpreting the Allegory of the Cave