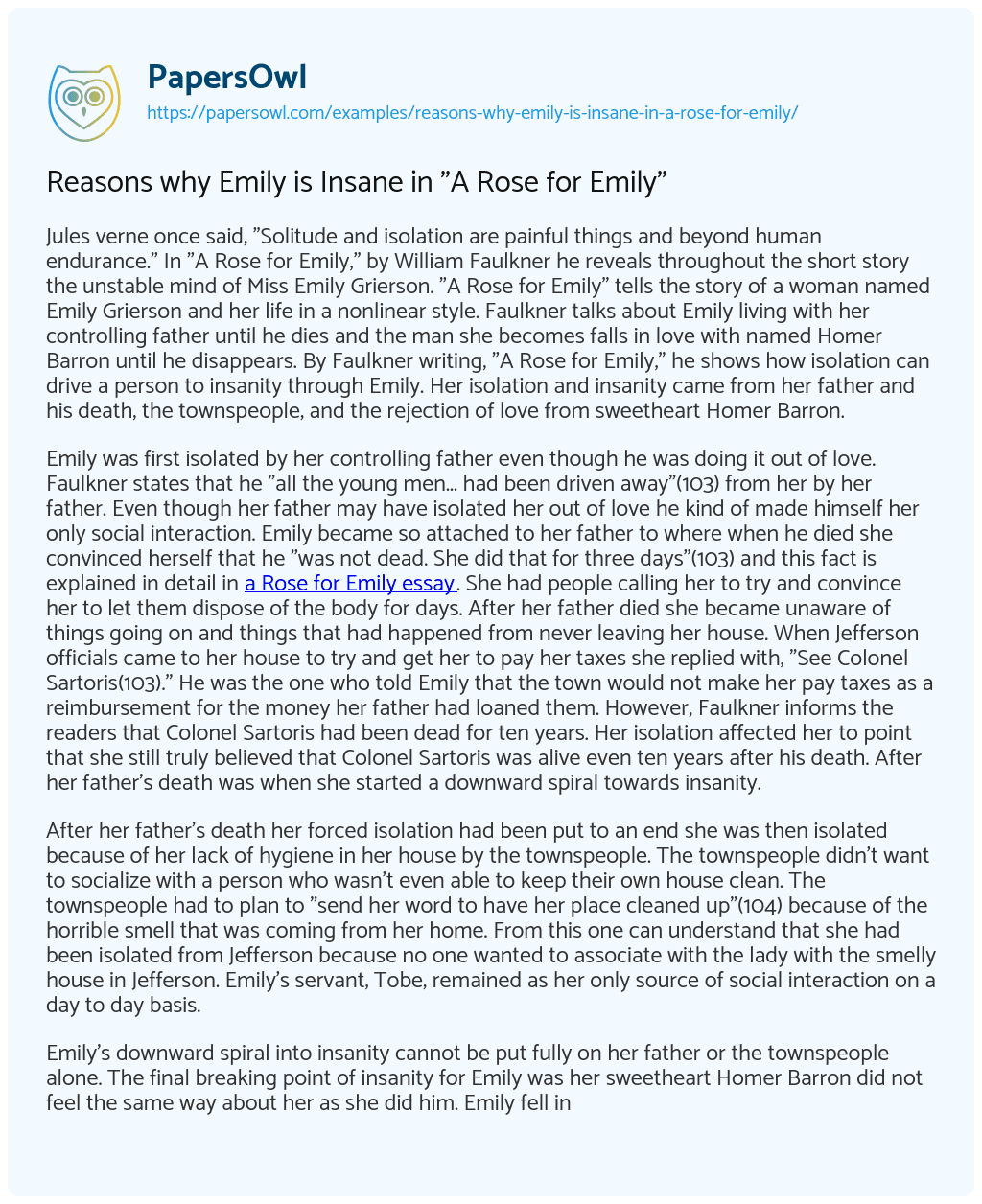 Jules verne once said, “Solitude and isolation are painful things and beyond human endurance.” In “A Rose for Emily,” by William Faulkner he reveals throughout the short story the unstable mind of Miss Emily Grierson. “A Rose for Emily” tells the story of a woman named Emily Grierson and her life in a nonlinear style. Faulkner talks about Emily living with her controlling father until he dies and the man she becomes falls in love with named Homer Barron until he disappears. By Faulkner writing, “A Rose for Emily,” he shows how isolation can drive a person to insanity through Emily. Her isolation and insanity came from her father and his death, the townspeople, and the rejection of love from sweetheart Homer Barron.

Emily was first isolated by her controlling father even though he was doing it out of love. Faulkner states that he “all the young men… had been driven away”(103) from her by her father. Even though her father may have isolated her out of love he kind of made himself her only social interaction. Emily became so attached to her father to where when he died she convinced herself that he “was not dead. She did that for three days”(103) and this fact is explained in detail in a Rose for Emily essay. She had people calling her to try and convince her to let them dispose of the body for days. After her father died she became unaware of things going on and things that had happened from never leaving her house. When Jefferson officials came to her house to try and get her to pay her taxes she replied with, “See Colonel Sartoris(103).” He was the one who told Emily that the town would not make her pay taxes as a reimbursement for the money her father had loaned them. However, Faulkner informs the readers that Colonel Sartoris had been dead for ten years. Her isolation affected her to point that she still truly believed that Colonel Sartoris was alive even ten years after his death. After her father’s death was when she started a downward spiral towards insanity.

After her father’s death her forced isolation had been put to an end she was then isolated because of her lack of hygiene in her house by the townspeople. The townspeople didn’t want to socialize with a person who wasn’t even able to keep their own house clean. The townspeople had to plan to “send her word to have her place cleaned up”(104) because of the horrible smell that was coming from her home. From this one can understand that she had been isolated from Jefferson because no one wanted to associate with the lady with the smelly house in Jefferson. Emily’s servant, Tobe, remained as her only source of social interaction on a day to day basis.

Emily’s downward spiral into insanity cannot be put fully on her father or the townspeople alone. The final breaking point of insanity for Emily was her sweetheart Homer Barron did not feel the same way about her as she did him. Emily fell in love with Homer and saw him as a way to start interacting with some of the townspeople again. The townspeople talked about how “Miss Emily had been to the jeweler’s and ordered a man’s toilet set in silver, with the letters H. B. on each piece”(106). One can conclude from this that she really liked Homer and probably dreamed of marrying him. However, she later realized her dreams were not going to happen when heard that Homer said “he liked men”(106) and consequently, she went to the druggist and bought arsenic to kill him with. At this point of the story, I saw Emily as just a cold-blooded killer but what made her go from a cold-blooded killer to insane was the fact that she slept next to Homer’s decaying corpse for decades.

Faulkner shows us how easy it can be for someone in complete continuous isolation can lead go down the path of insanity through his short story, “A Rose for Emily.” Through his story as readers we can learn that isolation can be a harmful thing so you should include yourself in thing in the world. You can take away a lesson to not let isolation take away your sanity.

Reasons why Emily is Insane in "A Rose for Emily". (2019, Oct 31). Retrieved from https://papersowl.com/examples/reasons-why-emily-is-insane-in-a-rose-for-emily/

Emily Grierson’s Life in the a Rose for Emily