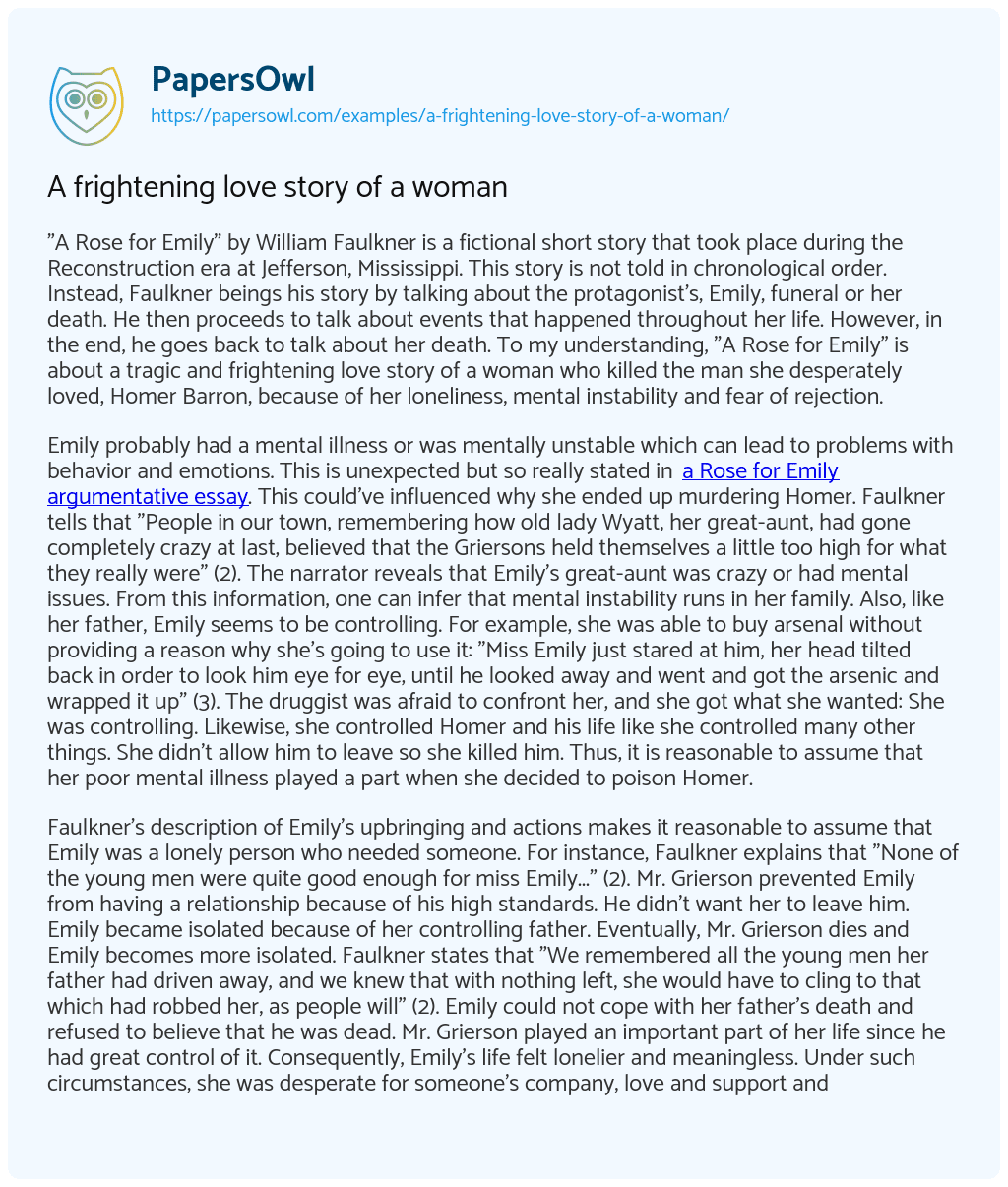 “A Rose for Emily” by William Faulkner is a fictional short story that took place during the Reconstruction era at Jefferson, Mississippi. This story is not told in chronological order. Instead, Faulkner beings his story by talking about the protagonist’s, Emily, funeral or her death. He then proceeds to talk about events that happened throughout her life. However, in the end, he goes back to talk about her death. To my understanding, “A Rose for Emily” is about a tragic and frightening love story of a woman who killed the man she desperately loved, Homer Barron, because of her loneliness, mental instability and fear of rejection.

Emily probably had a mental illness or was mentally unstable which can lead to problems with behavior and emotions. This is unexpected but so really stated in a Rose for Emily argumentative essay. This could’ve influenced why she ended up murdering Homer. Faulkner tells that “People in our town, remembering how old lady Wyatt, her great-aunt, had gone completely crazy at last, believed that the Griersons held themselves a little too high for what they really were” (2). The narrator reveals that Emily’s great-aunt was crazy or had mental issues. From this information, one can infer that mental instability runs in her family. Also, like her father, Emily seems to be controlling. For example, she was able to buy arsenal without providing a reason why she’s going to use it: “Miss Emily just stared at him, her head tilted back in order to look him eye for eye, until he looked away and went and got the arsenic and wrapped it up” (3). The druggist was afraid to confront her, and she got what she wanted: She was controlling. Likewise, she controlled Homer and his life like she controlled many other things. She didn’t allow him to leave so she killed him. Thus, it is reasonable to assume that her poor mental illness played a part when she decided to poison Homer.

Faulkner’s description of Emily’s upbringing and actions makes it reasonable to assume that Emily was a lonely person who needed someone. For instance, Faulkner explains that “None of the young men were quite good enough for miss Emily…” (2). Mr. Grierson prevented Emily from having a relationship because of his high standards. He didn’t want her to leave him. Emily became isolated because of her controlling father. Eventually, Mr. Grierson dies and Emily becomes more isolated. Faulkner states that “We remembered all the young men her father had driven away, and we knew that with nothing left, she would have to cling to that which had robbed her, as people will” (2). Emily could not cope with her father’s death and refused to believe that he was dead. Mr. Grierson played an important part of her life since he had great control of it. Consequently, Emily’s life felt lonelier and meaningless. Under such circumstances, she was desperate for someone’s company, love and support and could’ve done anything to have Homer’s.

Furthermore, Emily’s fear of rejection is what ultimately lead up to her decision of hilling Homer Barron. Faulkner reveals that “She will persuade him yet,’ because Homer himself had remarked-he liked men and it was known that he drank with the younger men in the Elks’ Club–that he was not a marrying man” (4). So, Homer was homosexual and did not have any intentions in marrying anyone. This information could have embarrassed and angered Emily since she was madly in love with him and had plans to marry him. However, the townspeople later discovered “that Miss Emily had been to the jeweler’s and ordered a man’s toilet set in silver, with the letters H. B. on each piece. Two days later we learned that she had bought a complete outfit of men’s clothing, including a nightshirt” (4). By knowing that Emily bought a man’s toilet set and outfit for Homer, one can imply that they might get married while the nightshirt can imply that they would sleep together. Despite this, unfortunately, we later learned that she ended up killing him by poisoning him with arsenic. It is also important to mention that she even kept his dead body and slept next to it on the bed. Emily was madly in love with Homer, so she did not want him to leave her or accept that he did not have any intentions to marry her. She instead decided to take his life away, so she could stay with him and his body-literally.

To sum things up, “A Rose for Emily” is a frightening love story of a woman who killed the man she loved because she felt lonely, had mental issues and feared rejection or him leaving.

A frightening love story of a woman. (2019, Oct 07). Retrieved from https://papersowl.com/examples/a-frightening-love-story-of-a-woman/

Did the “Rose” Stand for Love or Affection?