Racism and Violence against African Americans 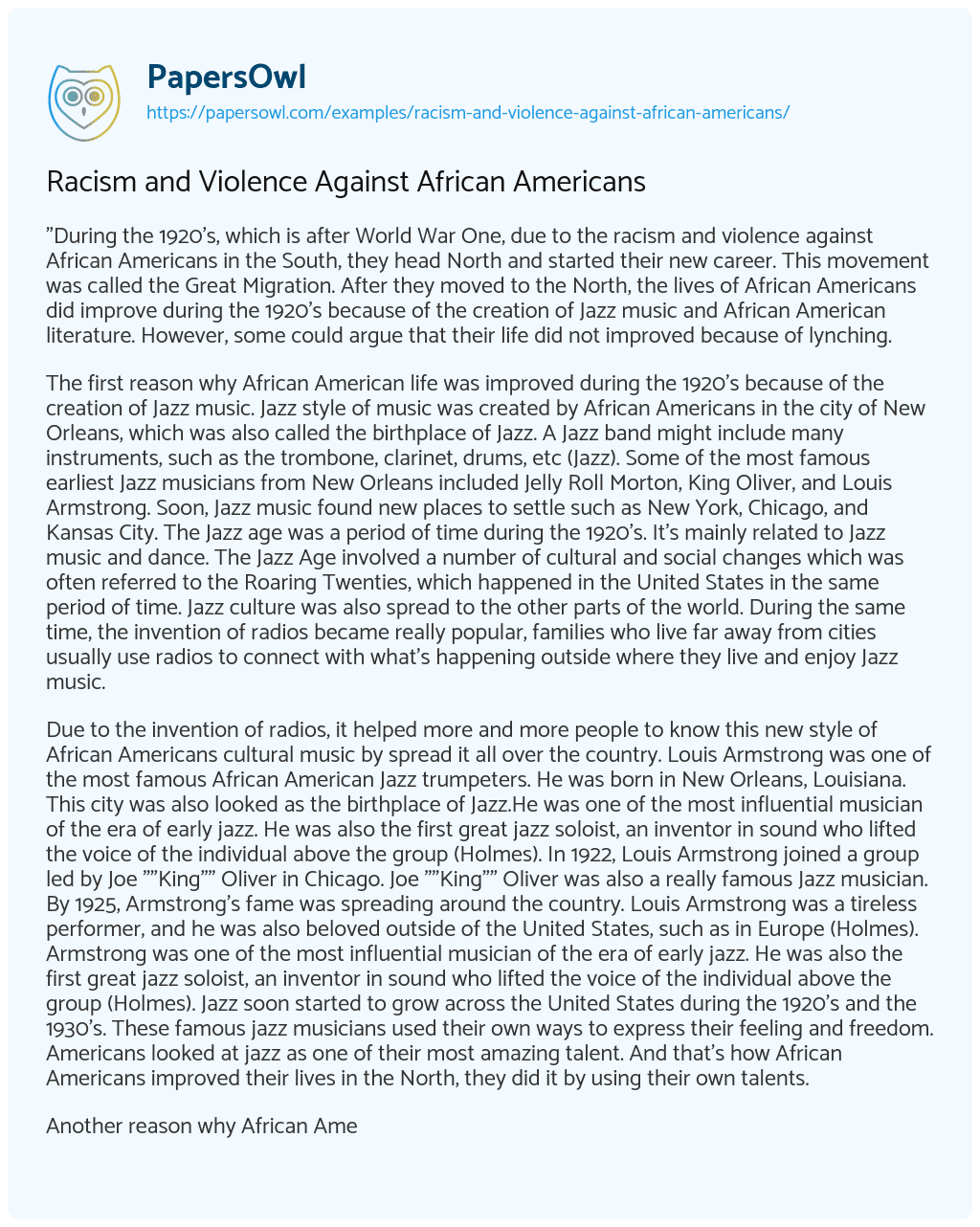 The first reason why African American life was improved during the 1920’s because of the creation of Jazz music. Jazz style of music was created by African Americans in the city of New Orleans, which was also called the birthplace of Jazz. A Jazz band might include many instruments, such as the trombone, clarinet, drums, etc (Jazz). Some of the most famous earliest Jazz musicians from New Orleans included Jelly Roll Morton, King Oliver, and Louis Armstrong. Soon, Jazz music found new places to settle such as New York, Chicago, and Kansas City. The Jazz age was a period of time during the 1920’s. It’s mainly related to Jazz music and dance. The Jazz Age involved a number of cultural and social changes which was often referred to the Roaring Twenties, which happened in the United States in the same period of time. Jazz culture was also spread to the other parts of the world. During the same time, the invention of radios became really popular, families who live far away from cities usually use radios to connect with what’s happening outside where they live and enjoy Jazz music.

Another reason why African Americans life was improved during the 1920’s because of their literature improvement, specifically Langston Hughes. Langston Hughes was an African American poet, playwright, and novelist (Langston). He was one of the leading figure of the 1920’s Harlem Renaissance. The Harlem Renaissance was a creative and artistic explosion centered in Harlem, New York, spanning the 1920’s. He went to New York City and started his career there, he inspired many, many people through his poems. And most of his poems are often discussed the racist of African Americans. Langston Hughes also wrote plays, short stories, novels, children’s books, history, essays, satirical sketches, and two volumes of autobiography (Otfinoski). He inspired many generations of writers in so many different ways. His poetic style is short, rhythmic lines with a musical quality. One of Hughes’s most popular works was a series of fictional sketches about a African American man called Jesse B. Semple, also known as “Simple””. He was just an average working man who expressed his opinions about life, race, and current events. Langston Hughes wrote sketches, books, and plays about Simple for 20 years (Williams)! Langston Hughes used the rhythm of jazz and blues music in his verses. He wrote more than 50 books. He also awarded the Spingarn Medal in 1960 for his achievement in literature (Williams). Langston Hughes had a famous writing, The Big Sea. He talked about races in the story. He described that the word “”Negro”” is used to mean anyone who has any Negro blood at all in his veins. In Africa, the word is more pure. It means all Negro, therefore black (Hughes). Langston hughes inspired so many people and this improved lives of African Americans by meaning respects and their creativity of literature.

However, African Americans still suffered from many whites during the time period. One of the most popular way to kill African Americans was lynching. Lynching usually means to kill, and to hang a person. victims of a lynching do not have a chance to defend themselves from being killed. The lynching mobs assumes its victims are guilty, whether or not the victims have had a trial. In the West part of the United States, many lynch mobs punished people for horse stealing, highway robbery, or murder. Lynchings began to take the form of hangings. lynching was one of the most cruel way that the whites treated African Americans. Before 1890, most lynching victims were toward whites. After that, most of these actions were taken in the North, and most of the victims have been African Americans. About 4,800 known lynchings occurred from 1882 to 1968. About 25 percent were against whites and 70 percent were against African Americans. many African Americans came to the North during the Great Migration in order to protect themselves from lynching.”

Racism and Violence Against African Americans. (2021, Jun 26). Retrieved from https://papersowl.com/examples/racism-and-violence-against-african-americans/