Racial Profiling and Use of Force during Traffic Stops 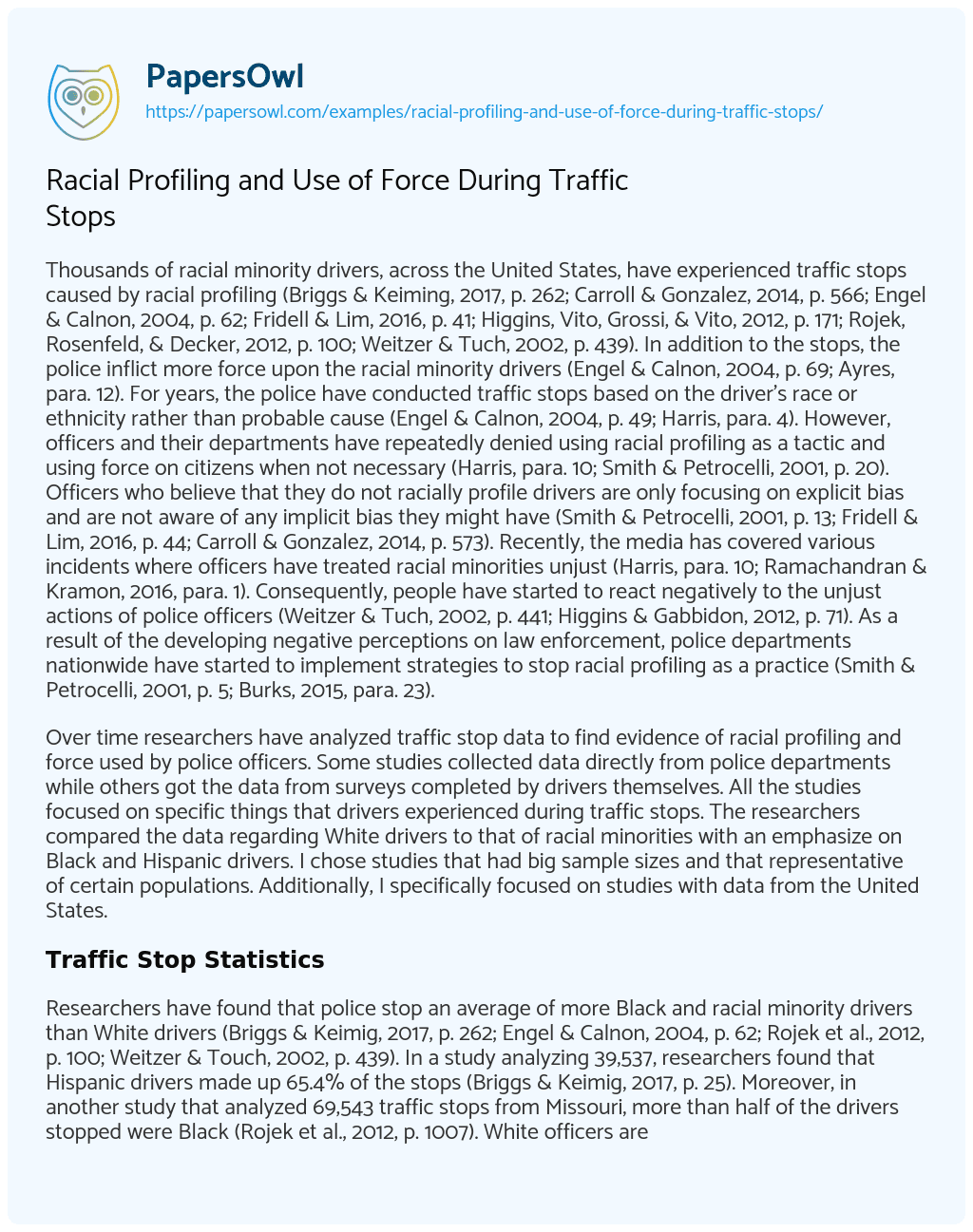 Over time researchers have analyzed traffic stop data to find evidence of racial profiling and force used by police officers. Some studies collected data directly from police departments while others got the data from surveys completed by drivers themselves. All the studies focused on specific things that drivers experienced during traffic stops. The researchers compared the data regarding White drivers to that of racial minorities with an emphasize on Black and Hispanic drivers. I chose studies that had big sample sizes and that representative of certain populations. Additionally, I specifically focused on studies with data from the United States.

Officers searched more Black drivers than White drivers (Briggs & Keimig, 2017, 260; Higgins et al., 2012, p. 166; Ridgeway, 2006, p. 27). Researchers analyzed the results of a survey with 209,350,600 respondents and concluded that the percentage of racial minority and Black drivers searched was double than the percentage of White drivers (Engel & Calnon, 2004, p. 69). In another study that analyzed 36,880 traffic stops from Kentucky, the percentage of searches conducted was higher for Black drivers than White drivers (Higgins et al., 2012, p. 173). In areas where Whites made up most of the population, officers almost always searched the Black drivers they stopped (Carroll & Gonzalez, 2014, p. 572). They would do this because the officers viewed them “as out-of-place” (Carroll & Gonzalez, 2014, p. 574). Police officers decide to search a driver’s vehicle if they believe the driver to be suspicious (Carroll & Gonzalez, 2014, p. 577). More times than not officers perceive Hispanic and Black drivers as the suspicious ones rather than White drivers (Briggs & Keimig, 2017, p. 262; Engel & Calnon, 2004, p. 62; Rojek et al., 2012, p. 100; Weitzer & Touch, 2002, p. 439)). Due to officers searching Black and Hispanic drivers, their traffic stops typically last longer than that of White drivers (Ridgeway, 2006, p. 22). However, data has found that White drivers, when searched, are the ones who have weapons or drugs in their vehicles (Ayres, para. 9)

Use of Force Statistics

Officers inflict more force to Black and racial minority drivers, and even more so if they are young (Engel & Calnon, 2004, p. 74; Smith & Petrocelli, 2001, p. 5). Engel and Calnon (2004) analyzed the responses to a survey about traffic stop and found that two percent of White drivers reported officers used force on them while the percentage for Black and racial minority drivers was double (p. 69). Researchers who analyzed 1,846 traffic stops found that police officers are more inclined to use electronic control devices on Black drivers rather than White drivers (Fridell & Lim, 2016, p. 43). Even if Black drivers are doing everything an officer is telling them to, the officer will still use some degree of force on them (Ayres, para. 12).

Racial Profiling is Not a Problem

Police departments and officers have continually claimed that traffic stops are conducted based on probable cause rather than anything else like race and ethnicity (Engel & Calnon, 2004, p. 49; Harris, para. 4). In fact, officers have gone as far as to claim that they stop Black and Hispanic drivers more often because they are known to traffic drugs, so that gives the officers reason to be able to stop and search the drivers (Harris, para. 4; Carroll & Gonzalez, 2014, p. 568). But nevertheless, officers conduct searches on White drivers at the same rate, or even more often, than they do with Black and racial minority drivers (Smith & Petrocelli, 2001, p. 20; Higgins et al., p. 167). And in addition, of all the drivers stopped, officers arrested or gave tickets to more White drivers (Smith & Petrocelli, 2001, p. 20).

As mentioned, officers argue that they only stop drivers when they have reason to do so. However, various researchers have evidence that officers tend to stop racial minorities far more often than Whites (Briggs & Keimig, 2017, p. 262; Engel & Calnon, 2004, p. 62; Rojek et al., 2012, p. 100; Weitzer & Touch, 2002, p. 439). This is a result of officers’ explicit biases. Stereotypes associated by different races influence explicit biases which are simply views and beliefs that someone consciously has (Carroll & Gonzalez, 2014, p. 572; Fridell & Lim, 2016, p. 38). An example of a belief that these officers have is that drivers of color are more likely to be involved in criminal activity (Fridell & Lim, 2016, p. 38; Carroll & Gonzalez, 2014, p. 574). As a result of this belief, officers are more likely to stop racial minorities. Another example of a belief that officers hold is that Hispanic and Black drivers are more dangerous than White drivers. Therefore, when an officer stops either a Hispanic or Black driver her or she will be more cautious and physical (Fridell & Lim, 2016, p. 39; Carroll & Gonzalez, 2014, p. 574). This dangerous belief is even more prevalent when officers stop Hispanics and Blacks in a location where the population is heavily White (Carroll & Gonzalez, 2014, p. 576).

The only difference between explicit and implicit bias are the aspects of conscious and unconscious. Those police officers who claim to not practice racial profiling on the road are not aware that they can still possess racial biases unconsciously (Carroll & Gonzalez, 2014, p. 574; Fridell & Lim, 2016, p. 38). Officers are not aware that stereotypes related to Black and racial minority drivers influence their actions during traffic stops (Fridell & Lim, 2016, p. 38; Carroll & Gonzalez, 2014, p. 574). These stereotypes can lead officers to search and frisk Black drivers more frequently than White drivers. Implicit bias is what causes officers to decide if the drivers they have stopped represent a danger to them (Carroll & Gonzalez, 2014, p. 577). Furthermore, if officers do believe they are in danger, they will use a greater amount of force (Fridell & Lim, 2016, p. 42).

Black and White drivers alike believe law enforcement should stop using racial profiling as a tactic to try and uncover criminal activity (Higgins & Gabbidon, p. 71; Weitzer & Tuch, p. 441). However, White drivers are not as aware as Hispanic and Black drivers when it comes to how much officers still racially profile Americans (Higgins & Gabbidon, p. 71). Weitzer and Tuch (2002) found that out of the 903 White survey respondents only 60%, twenty percent less than the percentage of the Black survey respondents, thought racial profiling during traffic stops was a prevalent problem (p. 443). Higgins and Gabbidon (2012) found that in their study racial minorities who reside in communities where crime happens frequently have more pessimistic thoughts of police officers who racial profile and use force (p. 73). In that same study, Hispanics who had experienced unpleasant police experiences due to their race would develop a dislike for police officers (Higgins & Gabbidon, 2012, p. 74). However, people who never have experienced racial profiling during a traffic stop do negative views toward police officers (Smith & Petrocelli, 2001, p. 6; Higgins & Gabbidon, 2012, p. 74). Due to the increasing media attention on racial profiling, people are starting to lose trust in the criminal justice system (Lafraniere & Lehren, 2015, para. 12; Weitzer & Tuch, 2002, p. 443). It may even go as far as individuals fearing law enforcement officers.

Some states in the United States have decided to pass laws that prohibit law enforcement officers from practicing racial profiling (Ridgeway, 2016, p .1; Ramachandran & Kramon, 2016, para. 11; Smith & Petrocelli, 2001, p. 4). However, laws cannot guarantee that this practice disappear, it is going to take much more. Not even the fact that in some parts of the United States police officers wear body cameras, which should be on while they are on the job, secure the possibility that officers will not racially profile or use force of drivers during a traffic stop (Ramachandran & Kramon, 2016, para. 1). Therefore, police departments have taken it upon themselves to get rid of racially profiling drivers (Burks, 2015, para. 1; Ramachandran & Kramon, 2016, para. 18). During a simulation where officers came face to face with Black and White armed and unarmed men, the officers either shot Black unarmed men or did not shoot the White men that had weapons (Fridell & Lim, 2016, p. 39). Unfortunately, this stimulation represents the actions of police officers in real life. A Black unarmed driver is nearly two times more likely to be shot at by an police officer than a armed White driver is (Ayres, para. 6). By making officers experience simulations where they deal with drivers of various races, departments believe that it will help officers recognize their racial biases (Fridell & Lim, p. 39; Burks, 2015, para. 9). Other prevention methods that law enforcement uses are gathering everyone from a police department to talk about racial biases, so perhaps officers will notice they may have conscious or unconscious racial views or beliefs (Burks, 2015, para. 8). And lastly, showing new officers or recruit’s videos on what racial profiling is and what it looks like is a method various department, like some in San Diego, California are using (Burks, 2015, para. 9).

Racial Profiling and Use of Force During Traffic Stops. (2021, May 10). Retrieved from https://papersowl.com/examples/racial-profiling-and-use-of-force-during-traffic-stops/