Punishment and the Nature of the Crime 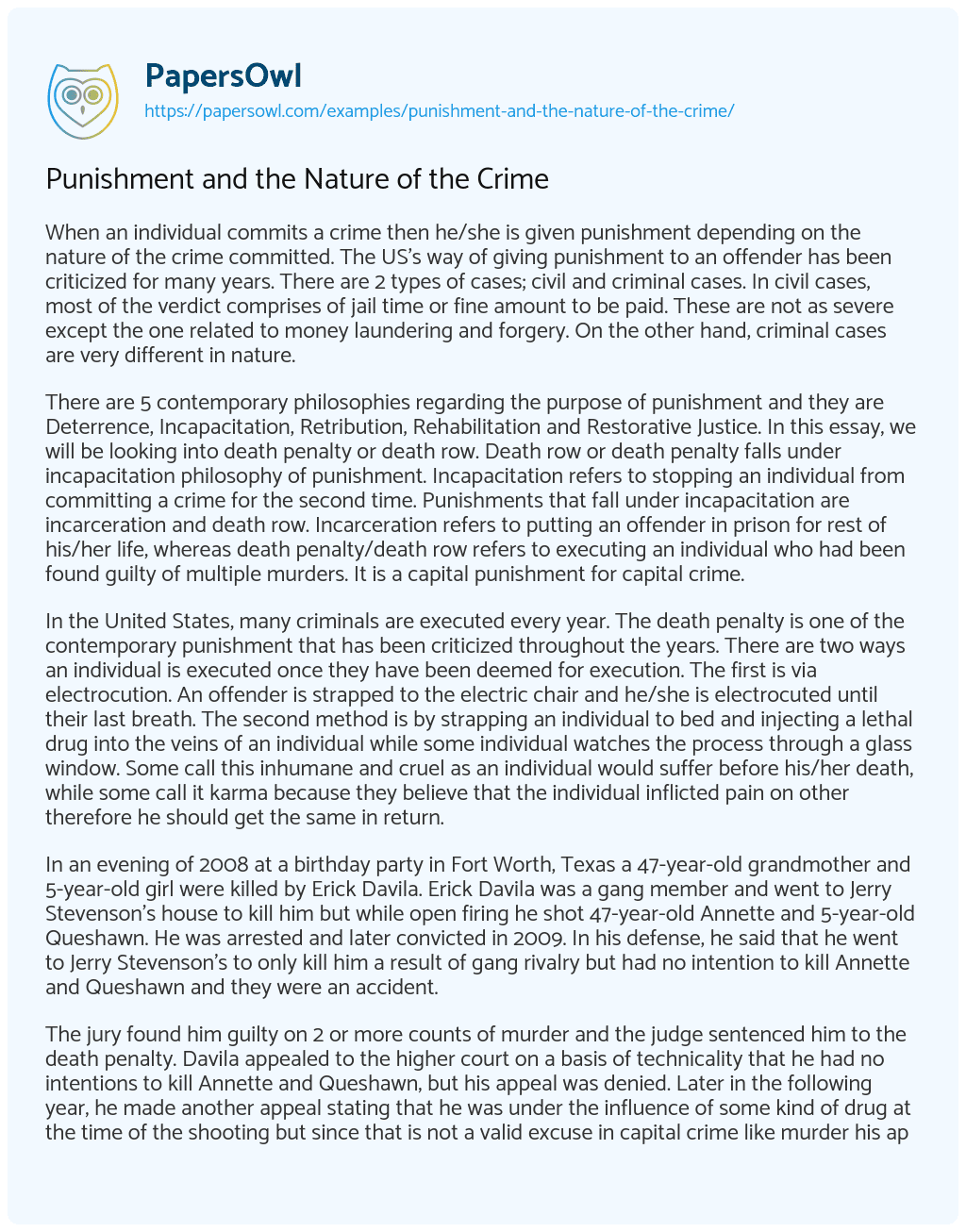 When an individual commits a crime then he/she is given punishment depending on the nature of the crime committed. The US’s way of giving punishment to an offender has been criticized for many years. There are 2 types of cases; civil and criminal cases. In civil cases, most of the verdict comprises of jail time or fine amount to be paid. These are not as severe except the one related to money laundering and forgery. On the other hand, criminal cases are very different in nature.

There are 5 contemporary philosophies regarding the purpose of punishment and they are Deterrence, Incapacitation, Retribution, Rehabilitation and Restorative Justice. In this essay, we will be looking into death penalty or death row. Death row or death penalty falls under incapacitation philosophy of punishment. Incapacitation refers to stopping an individual from committing a crime for the second time. Punishments that fall under incapacitation are incarceration and death row. Incarceration refers to putting an offender in prison for rest of his/her life, whereas death penalty/death row refers to executing an individual who had been found guilty of multiple murders. It is a capital punishment for capital crime.

In the United States, many criminals are executed every year. The death penalty is one of the contemporary punishment that has been criticized throughout the years. There are two ways an individual is executed once they have been deemed for execution. The first is via electrocution. An offender is strapped to the electric chair and he/she is electrocuted until their last breath. The second method is by strapping an individual to bed and injecting a lethal drug into the veins of an individual while some individual watches the process through a glass window. Some call this inhumane and cruel as an individual would suffer before his/her death, while some call it karma because they believe that the individual inflicted pain on other therefore he should get the same in return.

In an evening of 2008 at a birthday party in Fort Worth, Texas a 47-year-old grandmother and 5-year-old girl were killed by Erick Davila. Erick Davila was a gang member and went to Jerry Stevenson’s house to kill him but while open firing he shot 47-year-old Annette and 5-year-old Queshawn. He was arrested and later convicted in 2009. In his defense, he said that he went to Jerry Stevenson’s to only kill him a result of gang rivalry but had no intention to kill Annette and Queshawn and they were an accident.

The jury found him guilty on 2 or more counts of murder and the judge sentenced him to the death penalty. Davila appealed to the higher court on a basis of technicality that he had no intentions to kill Annette and Queshawn, but his appeal was denied. Later in the following year, he made another appeal stating that he was under the influence of some kind of drug at the time of the shooting but since that is not a valid excuse in capital crime like murder his appeal was denied again. Davila tried to fight until the last moment but he did not succeed. On April 25, 2018, Davila was injected with a lethal drug at 6:00 pm and on 06:31 pm he was pronounced dead.

Another death penalty case that has been criticized and re-opened is the case of Williams Marcellus. Marcellus was accused of killing Lisha Gayle on 1998. He was accused and sentenced to be executed. But due to the recent developments shows that he might be an innocent person on a death row. As Williams had been accused of a murder of Lisha Gayle, the recent development indicate that the DNA evidence found at the time of the crime scene does not belong to Mr. Williams and it belonged to someone else.

His DNA was not on the murder weapon that killed Lisha Gayle. At the time of providing evidence the evidence report was not submitted to the judge and Mr Williams and his lawyer were never provided with an opportunity to view the report of evidence. If this development had not been surfaced then an innocent man would have been killed and the culprit would still be roaming free. Another reason why the death penalty is considered inhumane and cruel is because of the number and nature of drugs used, their effects and the process. Different states use different numbers of drugs to execute an individual. Some states use one drug and some use 3 drugs in the process.

The process of lethal execution comprises of 3 different drugs. On the day of the execution after the victim is strapped to the execution bed, he/she is first injected with Sodium Thiopental. This drug is used to make the victim unconscious so that they do not feel pain. The second drug that is injected is pancuronium bromide, this drug is used to paralyze muscle and to initiate a respiratory arrest. The final drug that is used is potassium chloride to stop the heart. There have been incidents when victims have expressed what their body was going through during the execution process. Michael Wilson who was executed on Jan 9, OK by using pentobarbital said, “I can feel my body burning”. Another victim Dennis McGuire also suffered during his execution.

As reported by AP reporter Alan Johnson,” McGuire struggled, made guttural noise, gasped for air and chocked for about 10 minutes before succumbing to a new two-drug execution method”. Incidents like these have raised concerns about the execution because of the torture suffered by the victim. The death penalty is a very sensitive issue. We are talking about taking an individual like as a punishment for a committed crime. one part of me says that people who commit such severe crime do not deserve to walk on the face of the earth, but yet again another side of me says he/she is just like a human that we are and who are we to decide if an individual should live or die?

Punishment and the Nature of the Crime. (2019, Jul 01). Retrieved from https://papersowl.com/examples/punishment-and-the-nature-of-the-crime/