Problems of the Poor Education System in Sierra Leone 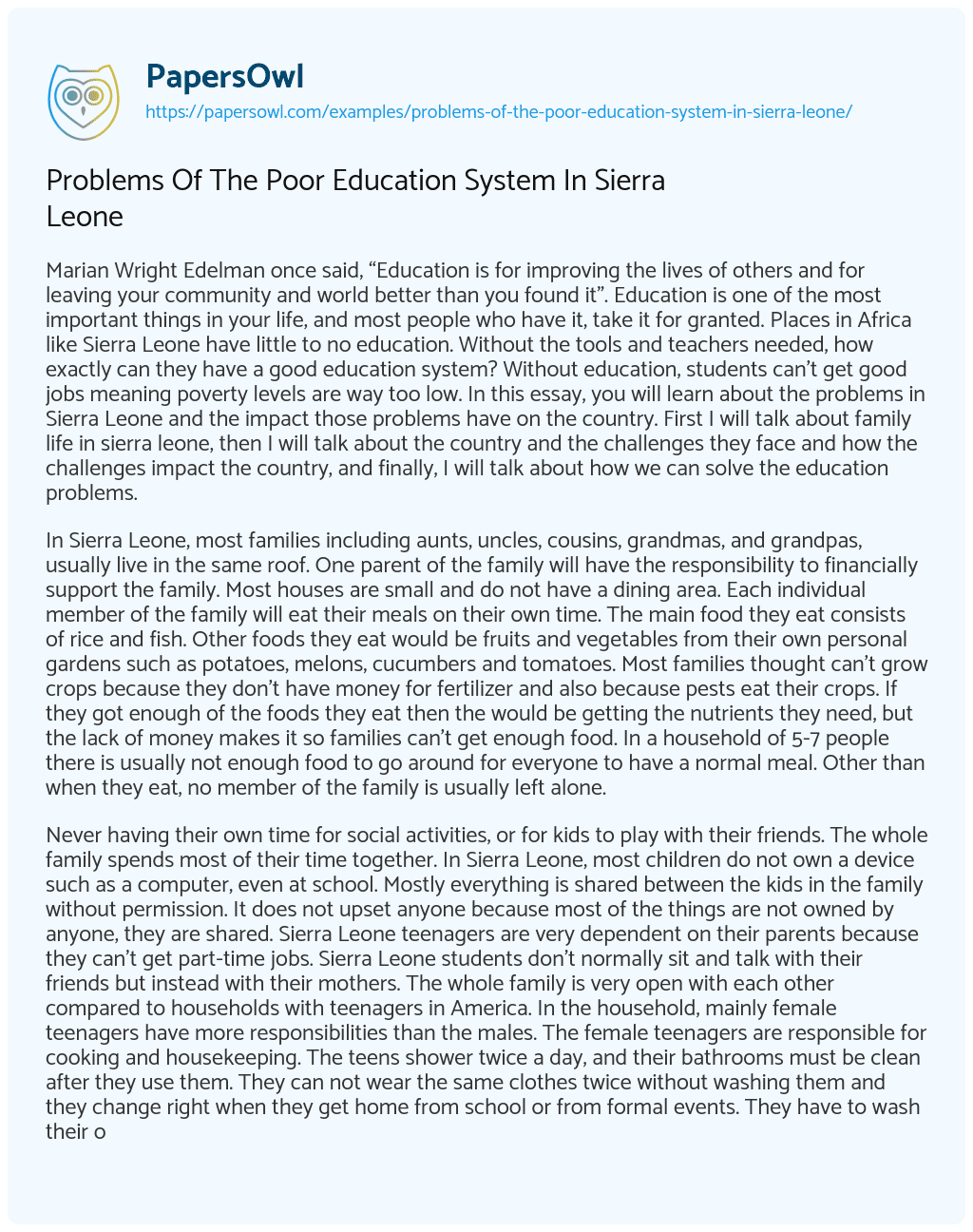 Marian Wright Edelman once said, “Education is for improving the lives of others and for leaving your community and world better than you found it”. Education is one of the most important things in your life, and most people who have it, take it for granted. Places in Africa like Sierra Leone have little to no education. Without the tools and teachers needed, how exactly can they have a good education system? Without education, students can’t get good jobs meaning poverty levels are way too low. In this essay, you will learn about the problems in Sierra Leone and the impact those problems have on the country. First I will talk about family life in sierra leone, then I will talk about the country and the challenges they face and how the challenges impact the country, and finally, I will talk about how we can solve the education problems.

In Sierra Leone, most families including aunts, uncles, cousins, grandmas, and grandpas, usually live in the same roof. One parent of the family will have the responsibility to financially support the family. Most houses are small and do not have a dining area. Each individual member of the family will eat their meals on their own time. The main food they eat consists of rice and fish. Other foods they eat would be fruits and vegetables from their own personal gardens such as potatoes, melons, cucumbers and tomatoes. Most families thought can’t grow crops because they don’t have money for fertilizer and also because pests eat their crops. If they got enough of the foods they eat then the would be getting the nutrients they need, but the lack of money makes it so families can’t get enough food. In a household of 5-7 people there is usually not enough food to go around for everyone to have a normal meal. Other than when they eat, no member of the family is usually left alone.

Never having their own time for social activities, or for kids to play with their friends. The whole family spends most of their time together. In Sierra Leone, most children do not own a device such as a computer, even at school. Mostly everything is shared between the kids in the family without permission. It does not upset anyone because most of the things are not owned by anyone, they are shared. Sierra Leone teenagers are very dependent on their parents because they can’t get part-time jobs. Sierra Leone students don’t normally sit and talk with their friends but instead with their mothers. The whole family is very open with each other compared to households with teenagers in America. In the household, mainly female teenagers have more responsibilities than the males. The female teenagers are responsible for cooking and housekeeping. The teens shower twice a day, and their bathrooms must be clean after they use them. They can not wear the same clothes twice without washing them and they change right when they get home from school or from formal events. They have to wash their own clothes by hand, most have never even seen an American style washing machine. Normally there are no pets found in households. If the family has a pet it is normally a dog but they’re not allowed inside of the house.

Sierra Leone is a country that can be located in western Africa, on the Atlantic ocean. Sierra Leone was one of the countries that were largely affected by Ebola. In 2014 and 2015 the disease infected around 14,000 people. The quarantines and curfews cause economic and social repercussions. They had to close down schools for a period of time to avoid the disease spreading more. Leaving thousands of students without education. In 2004 70% of the 4.9 million people in Sierra Leone, were under the national poverty line. 52% of the population was living on only one US dollar a day. In Sierra Leone, poor conditions make it hard to grow crops such as pests, diseases, and low soil fertility. This makes crops more expensive making it harder for families to afford food. Because they use up most of their money on food it is hard to afford an education for the kids.

Education is a challenge for Sierra Leone. The Civil War in Sierra Leone lasted from 1991 to 2002 and caused the education system to stop completely. It closed down 1,270 primary schools and forced 67% of students from every grade out of school in 2001. As of now education in Sierra Leone is still recovering from the mess that was caused by the war. Because of cultural beliefs, it is hard to get girls who live in rural areas any type of education. If there is a student hoping to go to a university there are only two options in which they can choose from Njala University and the University of Sierra Leone. Ages 15 to 24 literacy rate is below 60 percent, and the adult literacy rate is only at about 43 percent. As bad as all of this may seem, Sierra Leone has actually made a big comeback compared to what the rates were in the past. Only 55 percent of children were finishing primary school. Since then the amount of kids finishing primary school has raised to 76% of students finishing primary school, and 77 percent of those children advance to the junior secondary level.

There are problems that cause Sierra Leone to have a poor education system, but how exactly can we fix it? There are multiple ways in which we can solve the problems a couple of them in which are reasonable. The lack of teachers and the quality of the teachers in Sierra Leone is not where it should be. Countries like the United States, The United Kingdom, Canada, and Finland have some of the best education in the world. More teachers who are willing to teach in countries facing poverty like Sierra Leone should be trained and sent over. There are also plenty of people willing to do this for free. There are some areas where teachers can sign up to volunteer and teach students. If this was more advertised I think that there would be a lot of teachers signing up to do so. Even if it is just during the summer 3 months of schooling in Sierra Leone would be better than none. The teachers who are already in Sierra Leone but are untrained we could have volunteers to go down for 3 months during the summer and train the teachers to get them prepared for the next school year. With better teachers, the students will be able to learn more bettering their generation which is our future. The better education that they receive the better jobs they can get and the better jobs they get the more money they can make.

The other major reason that students in Sierra Leone aren’t getting a good enough education that is needed is that of the lack of textbooks. Many schools in the United States are now using computers and other devices which have textbooks on them. There are hundreds of textbooks in each school that never get used and take up space. Sometime there will be computer issues so a student may have to use the paper copy of a textbook. In most classes, you only need a couple of those textbooks ever. Instead of them sitting on a shelf collecting dust in the school the schools should donate as many as possible to countries like Sierra Leone. The setup of classrooms also affects the quality of education that students get. In Sierra Leone, it is common for classrooms to have dirt floors and no air conditioning. The average temperature in sierra leone is between eighty to ninety degrees Fahrenheit. The classrooms get very hot making it hard for students to pay attention.

If we had more mission trips in churches in the United States where they would install air conditioners then it would make the classrooms much cooler and is the simplest way of improving the classroom that makes a big difference. Another option would be to update or build a school. Since American money is worth more in Sierra Leone it would cost around $12,500 in American money to build a new school. Most churches have mission trips in which the raise money for so that they can help out other countries facing poverties. There are around 300 people who attend big churches in America. The average amount of money made by three big churches for business trips within the span of a year, is around $22,000. If those three churches went to Sierra Leone to build schools then within 2 years, there would be enough money to build three schools in Sierra Leone. This means around 6-8 Different classrooms every two years. In the span of 6 years we could put up 9 schools which is around The new classrooms would include an air conditioning system.

Problems Of The Poor Education System In Sierra Leone. (2022, Jun 20). Retrieved from https://papersowl.com/examples/problems-of-the-poor-education-system-in-sierra-leone/

Poor Education is a Social Issue

About some Problems in our Higher Education System