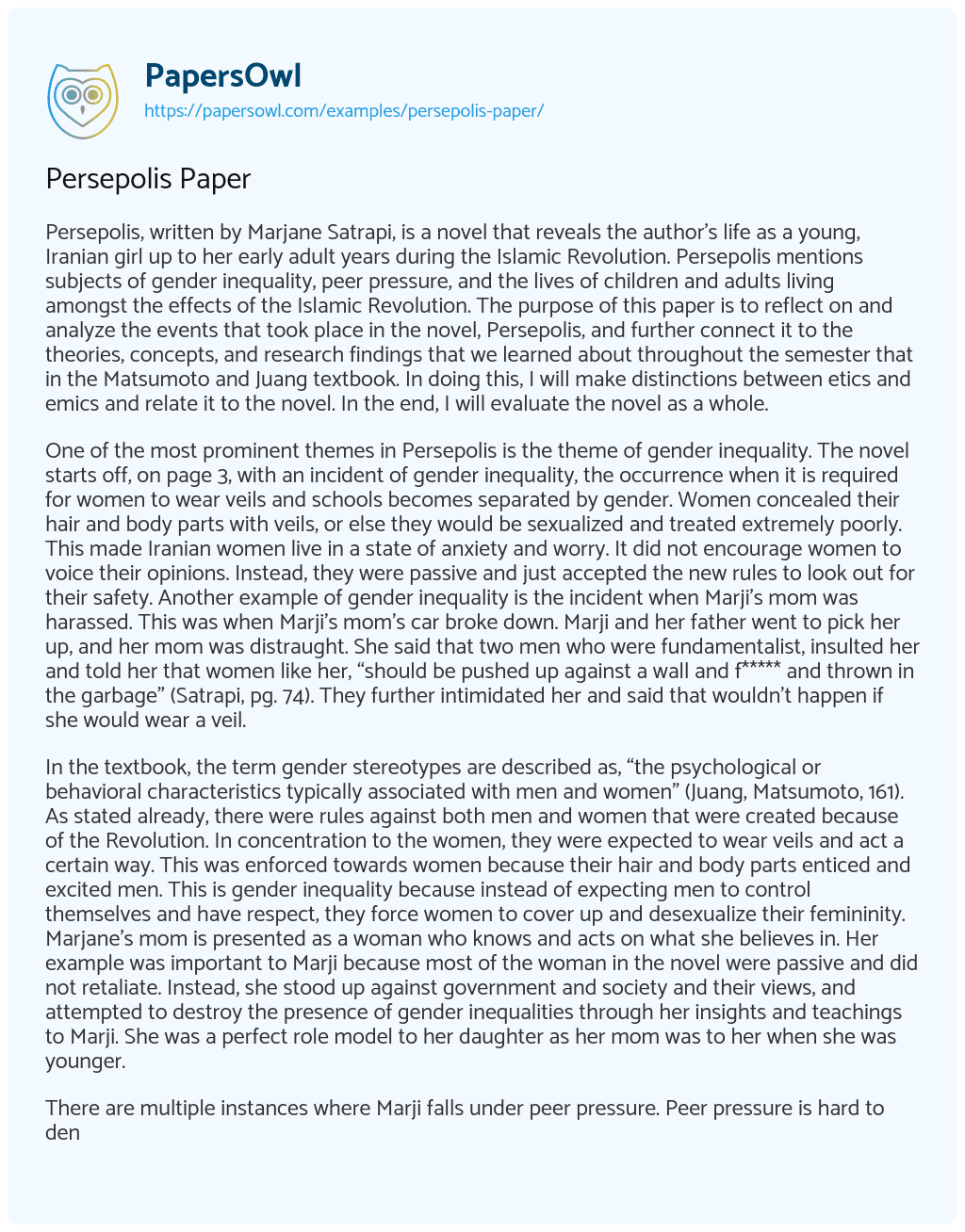 Persepolis, written by Marjane Satrapi, is a novel that reveals the author’s life as a young, Iranian girl up to her early adult years during the Islamic Revolution. Persepolis mentions subjects of gender inequality, peer pressure, and the lives of children and adults living amongst the effects of the Islamic Revolution. The purpose of this paper is to reflect on and analyze the events that took place in the novel, Persepolis, and further connect it to the theories, concepts, and research findings that we learned about throughout the semester that in the Matsumoto and Juang textbook. In doing this, I will make distinctions between etics and emics and relate it to the novel. In the end, I will evaluate the novel as a whole.

One of the most prominent themes in Persepolis is the theme of gender inequality. The novel starts off, on page 3, with an incident of gender inequality, the occurrence when it is required for women to wear veils and schools becomes separated by gender. Women concealed their hair and body parts with veils, or else they would be sexualized and treated extremely poorly. This made Iranian women live in a state of anxiety and worry. It did not encourage women to voice their opinions. Instead, they were passive and just accepted the new rules to look out for their safety. Another example of gender inequality is the incident when Marji’s mom was harassed. This was when Marji’s mom’s car broke down. Marji and her father went to pick her up, and her mom was distraught. She said that two men who were fundamentalist, insulted her and told her that women like her, “should be pushed up against a wall and f***** and thrown in the garbage” (Satrapi, pg. 74). They further intimidated her and said that wouldn’t happen if she would wear a veil.

In the textbook, the term gender stereotypes are described as, “the psychological or behavioral characteristics typically associated with men and women” (Juang, Matsumoto, 161). As stated already, there were rules against both men and women that were created because of the Revolution. In concentration to the women, they were expected to wear veils and act a certain way. This was enforced towards women because their hair and body parts enticed and excited men. This is gender inequality because instead of expecting men to control themselves and have respect, they force women to cover up and desexualize their femininity. Marjane’s mom is presented as a woman who knows and acts on what she believes in. Her example was important to Marji because most of the woman in the novel were passive and did not retaliate. Instead, she stood up against government and society and their views, and attempted to destroy the presence of gender inequalities through her insights and teachings to Marji. She was a perfect role model to her daughter as her mom was to her when she was younger.

There are multiple instances where Marji falls under peer pressure. Peer pressure is hard to deny at any age, but is especially harder during adolescence. Marji was sent to Western Europe by her parents because of the war in her country, Iran, for her protection. She was also acting out in school and went against the school’s demands. On page 192, there is the perfect example of how Marji falls under peer pressure. She is around her friends and one of the boys brings up the idea of smoking a joint. Off the bat, you can tell Marji feels out of place and feels pressured by her friends. She even said, “I didn’t like to smoke, but I did it out of solidarity, at the time, to me, grass and heroin were the same thing” (Satrapi, pg. 192). She continued and explained how she pretended to smoke and inhale, and how she made her eyes turn red by poking them. Towards the end of the incident, she said, “the harder I tried to assimilate, the more I had the feeling that I was distancing myself from my culture, betraying my parents and my origins, that I was playing a game by somebody else’s rules” (Satrapi, pg. 193).

[bookmark: _Hlk6249378] Enculturation is described in the textbook as “the process by which individuals learn and adopt the ways and manners of their specific culture” (Juang, Matsumoto, 2017). Enculturation happens when individuals socialize and adopt certain aspects of themselves from others, just because people naturally are influenced by the people around them, just how Marji was with her peers. According to the textbook, there are various agents of enculturation, and one includes peer groups. Peer groups offer children new perspective and ideas, whether if they are positive or negative. In Marji’s case, the influences are negative and cause her confusion to her identity in regards to her true culture and values. Marji is confused because she is struggling with her identity with her own culture, and is trying to make the culture in Europe her own because she lives there. This is where she realizes her identity and how it shapes her.

As known, this novel uncovers the impacts of the issues of the country on Marji’s mental, emotional, which then affected her physical health. Children living in a country that is experiencing war suffer in all aspects of their health and experience a different path of childhood, just as Marji did. Their vulnerability is because of their inability to grasp the reality of war and what it means. The schools in Iran were pushed to enforce the belief system by the Revolution on the children. An example of this is in the beginning of the book, on page 3, when Marji is explaining how her school was enforcing the practice of wearing veils. In the text, Marji explains how as a young girl, she and her peers did not understand why they had to wear the veil. This was because Marji’s school was a French, non-religious school, so this had never happened. And then, all of sudden, schools that were bilingual were forced to shut down. This frustrated Marji because she was separated from her friends and everything that was known to her as a child.

[bookmark: _Hlk6252493]In the textbook, it is explained that one of the most significant ways to teach instructive understanding is through education. For many countries, an educational system can be the most “important institution that teaches and reinforces its cultural values” (Juang, Matsumoto, 2017). The material that is taught in schools is a reflection of what some communities and their culture consider essential to learn. The teachers in the novel adopt a didactic model that forces an ideology on the students through lecture without the encouragement of responses from the students (Juang, Matsumoto, 2017). In the novel, the government’s ideology is being enforced on the children in schools so they can adopt the same beliefs. The sudden changes confused Marji because since she was a young girl, she was taught to believe in one way, and now in school, she is being forced to believe in a whole new system that oppressed her. In a sense, the new regime teaches Marji to be in charge of her political beliefs and unleashes the tough and resolved character she has developed once she left the oppressed school system and country.

Cultural universals are characteristics that are common to every human culture around the world. Cultural universals, which are known as etics, stays consistent across different cultures. In the textbook, they are described as, “aspects of life that appear to be consistent across different cultures; universal or pancultural truths or principles” (Juang, Matsumoto, 2017). Cultural specifics, also known as emics, are the opposite in the sense that they are circumstances that are not common to every human culture around the world. It is clarified as, “the aspects of life that appear to differ across cultures; truths or principles that are culture-specific” (Juang, Matsumoto, 2017). Two examples of etics in Marji’s childhood development is finding her identity as she grows and having dreams of who she could be. Marji questions traditions and beliefs because she is conflicted by what her identity is, which she is trying to create throughout the novel. Every individual goes through this as they are figuring out who they are as a person. Every child also goes through a phase of extreme imagination. When she was younger, she claims she was born with religion and had dreams of being a prophet, despite her gender. Two examples of emics in Marji’s childhood development would have to be living through times of war and moving away to another country at her age for safety. Not all children around the war experience war firsthand in their country. The war encourages Marji’s parents to send her to Europe for her protection. Not all children in terrible living conditions are able to leave to a better, safe area.

My overall evaluation of this book is how impressive and different this novel is. As I read more of the novel, I was more and more engaged. An immediate strength of this novel is the use of imagery. False assumptions made by the West is what Marjane Satrapi sought to eliminate through her graphic novel. Marjane Satrapi, the author of Persepolis, does this by reframing our perspective, by demonstrating the ethics of the Islamic Revolution and defending her country from nasty, mainstream attitude. She reframes something that is unfamiliar to some audiences and makes it relatable, and does this perfectly by using images. A weakness of the novel, if I can think of any, is probably that the book went by very quickly because of the imagery. It almost made the events in the novel seem like they were happening with no regards to time.

Religion in “Handmaids Tale” and Persepolis”