Our Benefactor: the Healing Honey Bee 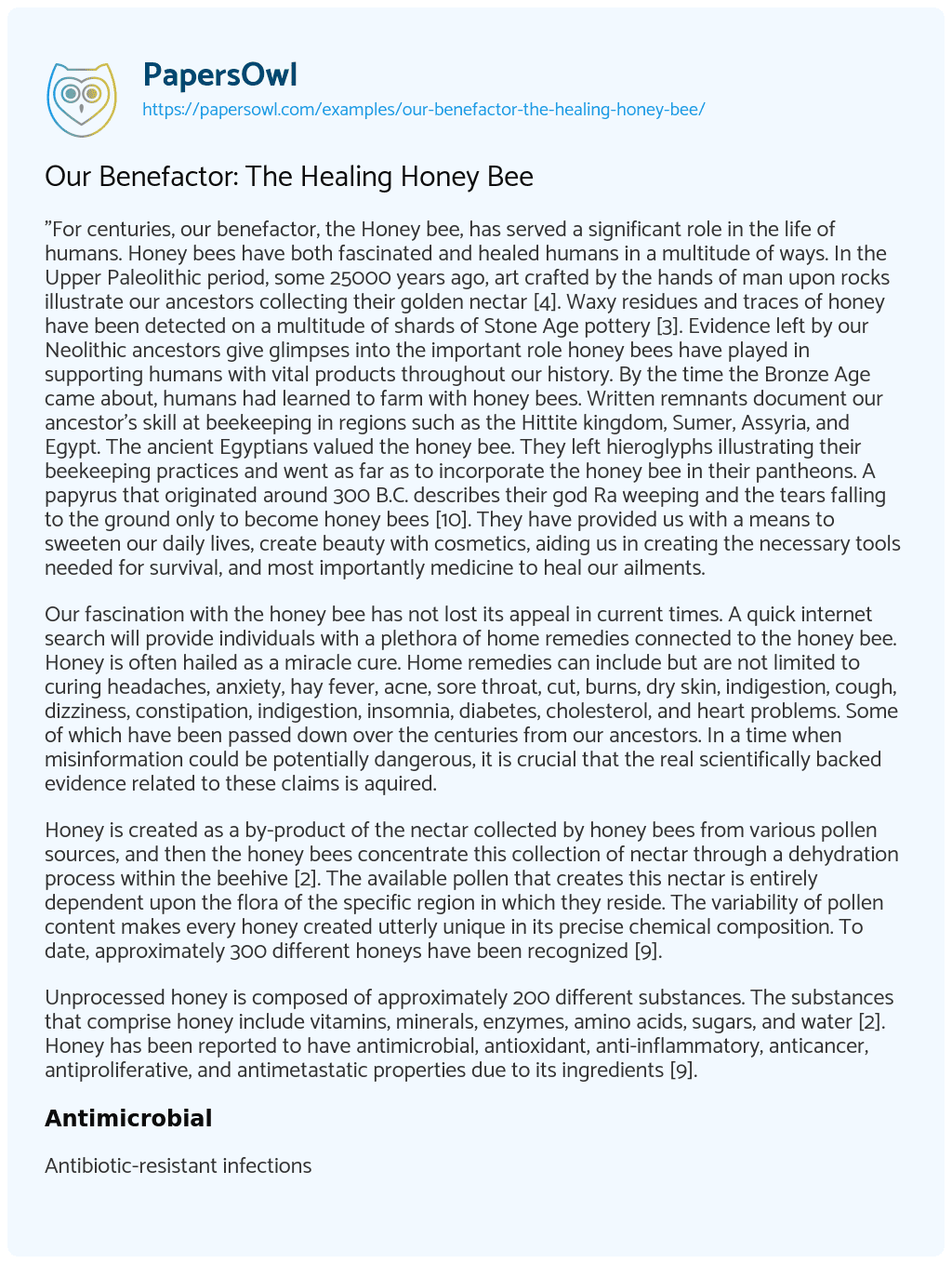 “For centuries, our benefactor, the Honey bee, has served a significant role in the life of humans. Honey bees have both fascinated and healed humans in a multitude of ways. In the Upper Paleolithic period, some 25000 years ago, art crafted by the hands of man upon rocks illustrate our ancestors collecting their golden nectar [4]. Waxy residues and traces of honey have been detected on a multitude of shards of Stone Age pottery [3]. Evidence left by our Neolithic ancestors give glimpses into the important role honey bees have played in supporting humans with vital products throughout our history. By the time the Bronze Age came about, humans had learned to farm with honey bees. Written remnants document our ancestor’s skill at beekeeping in regions such as the Hittite kingdom, Sumer, Assyria, and Egypt. The ancient Egyptians valued the honey bee. They left hieroglyphs illustrating their beekeeping practices and went as far as to incorporate the honey bee in their pantheons. A papyrus that originated around 300 B.C. describes their god Ra weeping and the tears falling to the ground only to become honey bees [10]. They have provided us with a means to sweeten our daily lives, create beauty with cosmetics, aiding us in creating the necessary tools needed for survival, and most importantly medicine to heal our ailments.

Our fascination with the honey bee has not lost its appeal in current times. A quick internet search will provide individuals with a plethora of home remedies connected to the honey bee. Honey is often hailed as a miracle cure. Home remedies can include but are not limited to curing headaches, anxiety, hay fever, acne, sore throat, cut, burns, dry skin, indigestion, cough, dizziness, constipation, indigestion, insomnia, diabetes, cholesterol, and heart problems. Some of which have been passed down over the centuries from our ancestors. In a time when misinformation could be potentially dangerous, it is crucial that the real scientifically backed evidence related to these claims is aquired.

Honey is created as a by-product of the nectar collected by honey bees from various pollen sources, and then the honey bees concentrate this collection of nectar through a dehydration process within the beehive [2]. The available pollen that creates this nectar is entirely dependent upon the flora of the specific region in which they reside. The variability of pollen content makes every honey created utterly unique in its precise chemical composition. To date, approximately 300 different honeys have been recognized [9].

Unprocessed honey is composed of approximately 200 different substances. The substances that comprise honey include vitamins, minerals, enzymes, amino acids, sugars, and water [2]. Honey has been reported to have antimicrobial, antioxidant, anti-inflammatory, anticancer, antiproliferative, and antimetastatic properties due to its ingredients [9].

Antibiotic-resistant infections have become an increasing concern for medical professionals and patients alike. In a time that most pharmaceutical remedies have become ineffective in treating infections, some researchers have decided to investigate the validity of some of our ancestors’ medicinal practices. Honey has been reported to have had inhibitory effects on some species of fungi, viruses, and approximately 60 different species of bacteria [2]. Pathogenic strains, such as Methicillin-resistant Staphylococcus epidermidis, Extended-spectrum beta-lactamases, Klebsiella pneumonia, Pseudomonas aeruginosa, Staphylococcus aureus, Proteus mirabilis, Pseudomonas aeruginosa, Clostridium difficile, and enterohemorrhagic E. coli.Streptococcus pyogenes, Streptococcus typhi, Staphylococcus aureus, coagulase-negative Streptococcus and E. coli, Pseudomonas aeruginosa, Acinetobacter baumannii, and Klebsiella pneumonia, have been researched and proven to have inhibited growth when treated with honey [1].

Research has revealed antifungal characteristics contained in honey are effective in treatments against Aspergillus niger, Aspergillus flavus, Penicillium chrysogenum, Microsporum gypseum, Candida albicans, Saccharomyces, and Malassezia species [1]. Honey inhibits fungal growth through prevention of their biofilm formation, disruption of established biofilms, and instigating changes to exopolysaccharide structure. It distorts the cell membrane integrity which results in shrinkage of the cell surface in biofilm, leading to death or growth retardation [1].

Current studies have manifested that honey holds potential antiviral effects. The antiviral effect of honey is attributed to its various ingredients which are operative in controlling of lesions. For instance, copper is a trace element found in honey that inhibits viral activity. Similarly, the presence of ascorbic acid, flavonoids, and H2O2 production by honey also leads to viral growth inhibition by interrupting viral transcription and translation [1].

The antimicrobial characteristics are attributed to its high osmolarity, low pH, hydrogen peroxide, and phytochemical components [5]. High sugar and low moisture content create an osmotic effect that is unproductive to microbial growth. The pH levels of honey range from 3.2 to 4.5 giving it the ability to restrict specific pathogens [5] [9]. The hydrogen peroxide generated by most honey, such as ulmo honey, is due to the activation of an enzyme called glucose oxidase [5]. This enzyme oxidizes glucose producing gluconic acid and hydrogen peroxide [5]. There are, however, honey that exhibit these antimicrobial characteristics without the presence of hydrogen peroxide. The presence of specific phytochemical components such as methylglyoxal is responsible for antibacterial activity [5]. Manuka honey that is produced from the pollen of the manuka tree is one of the honeys whose antimicrobial effects are not due to the content of hydrogen peroxide [5].

Flavonoids and polyphenols found in honey give it its antioxidant properties [8]. Antioxidants help to eliminate free radicals that lead to aging and are attributing factors in leading to various diseases [8]. The darker the honey, the more antioxidants honey contains [9].

Apoptosis, also called programmed cell death, is a biological kill switch for cells that have the potential to create cell growth and tumor formation when not functioning correctly [6]. When malfunctioning, the lack of cell death is more likely to lead to cancer [9]. Honey has been reported to help regulate the apoptotic process in cancer cells [9]. This makes it a great candidate to use in conjunction with chemotherapy. Chemotherapy is used to induce programmed cell death in cancer cells [9].

There are strong evidence which indicate the beneficial effects of honey in the treatment of diabetes mellitus. [81] These results point out the therapeutic prospects of using honey or other potent antioxidants as an adjunct to standard antidiabetic drugs in the control of diabetes mellitus. In one of the clinical trials of Type 1 and Type 2 diabetes mellitus, the application of honey was associated with dramatically lower glycemic index than with sucrose or glucose in type 1 diabetes and normal. [82] Type 2 diabetes has values similar to honey, glucose, and sucrose. In diabetic patients, honey can induce significantly a reduction in plasma glucose level versus dextran. [83] In normal and hyperlipidemic patients, it also reduces blood lipids, homocysteine, and C-reactive protein contents.

Studies have indicated that honey has the ability to reduce and possibly prevent asthma and bronchitis related symptoms [9]. Research has also discovered that mucus-secreting goblet cell hyperplasia can be removes through the inhalation of honey [9].

Flavonoids, polyphenolics, Vitamin C, and monophenols, Antioxidants found in honey, may be linked to a reduction of the risk of cardiovascular failure [9]. The protective qualities imparted by flavonoids include its antioxidant, antithrombotic, anti-ischemic, and vasorelaxant characteristics[9]. This leads to improvements in coronary vasodilatation, reduction of blood clots, and the inhabitition of low-density lipoproteins[9].

A multitude of studies indicate that polyphenols contained within honey may have nootropic and neuroprotective properties that are beneficial.[9] The polyphenol components found in honey inhibit biological mechanisms that lead to neurotoxicity, aging, and the pathological deposition of misfolded proteins, including amyloid beta.[9] Honey polyphenols counteract neuroinflammation in the hippocampus, a part of the brain involved in memory [9]. This could aid in the prevention of memory disorders and induce memory productions [9].

Research suggests certain honey strains could have bactericidal effects against Helicobacter pylori [9]. The clinical treatment of infants and children that have been admitted to the hospital with gastroenteritis further demonstrates the effectiveness of honey as part of an oral rehydration therapy and the significantly reduced duration of diarrhea [9].

Through investigation, research, and clinical trials, the unique qualities contained within honey have proven that honey could be play a very important role in the medical treatement of a multitude of human ailments. Indications from research conducted to investigate the medicinal usages of honey suggest it is indeed a potential alternative to the conventional control and treatment of wounds, diabetes mellitus, cancer, asthma, and cardiovascular, neurological, and gastrointestinal diseases [9].

It must be noted that overly processed honey, which is usually the case with honey found in most retail supermarkets and chains, has eliminated the pollen and enzyme content of the honey making it inadequate for medical usage [7]. The extreme heating that this overly processed honey goes through can easily destroy the peroxide activity that is attributed to the antimicrobial characteristic [5].

Honey bees are researched for their social behavior in attempts to ascertain how genes can regulate behavior through the developmental stages of the brain and nervous system [7]. Researching the genome of the honey bee may provide valuable insight into longevity, immunity, antibiotic resistance, allergic reactions, mental health, aging, and diseases of the X chromosome [7].”

Our Benefactor: The Healing Honey Bee. (2021, Jun 16). Retrieved from https://papersowl.com/examples/our-benefactor-the-healing-honey-bee/