Mental Illness is One Type of Homelessness 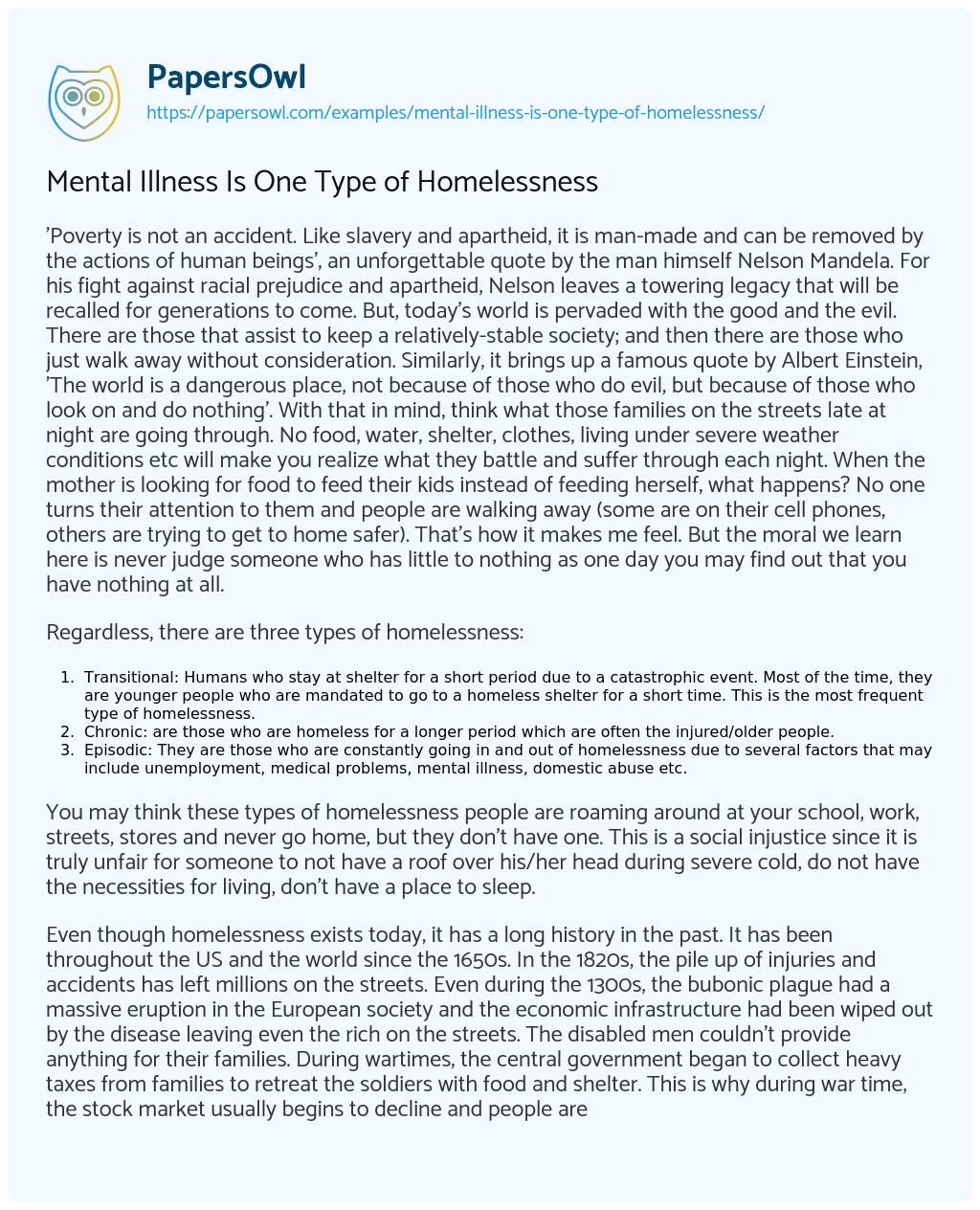 ‘Poverty is not an accident. Like slavery and apartheid, it is man-made and can be removed by the actions of human beings’, an unforgettable quote by the man himself Nelson Mandela. For his fight against racial prejudice and apartheid, Nelson leaves a towering legacy that will be recalled for generations to come. But, today’s world is pervaded with the good and the evil. There are those that assist to keep a relatively-stable society; and then there are those who just walk away without consideration. Similarly, it brings up a famous quote by Albert Einstein, ‘The world is a dangerous place, not because of those who do evil, but because of those who look on and do nothing’. With that in mind, think what those families on the streets late at night are going through. No food, water, shelter, clothes, living under severe weather conditions etc will make you realize what they battle and suffer through each night. When the mother is looking for food to feed their kids instead of feeding herself, what happens? No one turns their attention to them and people are walking away (some are on their cell phones, others are trying to get to home safer). That’s how it makes me feel. But the moral we learn here is never judge someone who has little to nothing as one day you may find out that you have nothing at all.

Regardless, there are three types of homelessness:

You may think these types of homelessness people are roaming around at your school, work, streets, stores and never go home, but they don’t have one. This is a social injustice since it is truly unfair for someone to not have a roof over his/her head during severe cold, do not have the necessities for living, don’t have a place to sleep.

Even though homelessness exists today, it has a long history in the past. It has been throughout the US and the world since the 1650s. In the 1820s, the pile up of injuries and accidents has left millions on the streets. Even during the 1300s, the bubonic plague had a massive eruption in the European society and the economic infrastructure had been wiped out by the disease leaving even the rich on the streets. The disabled men couldn’t provide anything for their families. During wartimes, the central government began to collect heavy taxes from families to retreat the soldiers with food and shelter. This is why during war time, the stock market usually begins to decline and people are looking to sell stuff but no one is willing to buy it as this leaves thousands of families on the streets. Therefore, during the Great Depression, working men and women found themselves homeless. And statistics don’t lie: 1 in 7 are facing hunger, 14% of the US population is in poverty, 4 million people are homeless each year in the US, 26% of them are under 18, 30% have been through violence, 25% have been through medical and mental illness issues etc. The reason why New York has the highest rate of homeless people/poverty is because the standard of living has continually fluctuated and gradually increased along with California. The government is at work in trying to reduce the number of homelessness people through their programs, organizations, charities etc but, we need your help!

There are many ways to end homelessness which includes affordable housing, lower tax rates, not raising prices, provide wraparound services, increasing money the government spends on the homeless, raise wages/income, social connectedness etc. This will not only get rid of homelessness people, but will also guarantee them their permanent home. Life is short and you want to make it as memorable as possible. You want people to remember your legacy and what you left behind for future generations. So, assisting the homeless by your creativity is the key to success. You will then start to realize ‘oh I am making a difference’. But if I could make a single change to cure the homeless people and let them find their permanent home, I would raise taxes on the wealthy. Ever since Donald Trump was elected, it changed the course of America. He has done some fantastic work in the office but he has agreed to lower tax rates on the wealthy and increase on the middle class. I feel this needs to be fixed. How will increasing taxes on the middle class and poor benefit us? Increasing taxes on them would most likely turn them into homeless people. They would no longer secure happiness in their lives, have no access to food, they just lost the basic necessities and we have another crisis rising. I feel raising taxes on the top 1% of the world would benefit us and the society as a whole. After all, they are the wealthy. Even paying just a bit more percentage of tax rates to the government won’t hurt them and if there was a single change to secure homeless people their homes, it would be this. To these ends, this country is doing all it can to secure its happiness, but we need your HELP!! I would like to conclude on a positive note; a quote by Emma Lazarus, ‘Give me your tired, your poor,

Your huddled masses yearning to breathe free, The wretched refuse of your teeming shore. Send these, the homeless, tempest-tossed, to me: I lift my lamp beside the golden door’.

Mental Illness Is One Type of Homelessness. (2022, Feb 09). Retrieved from https://papersowl.com/examples/mental-illness-is-one-type-of-homelessness/

How Many People with Serious Mental Illness are Homeless?

Unemployment a Major Cause of Homelessness

The Causes of Homelessness