Marijuana Decriminalization in all States 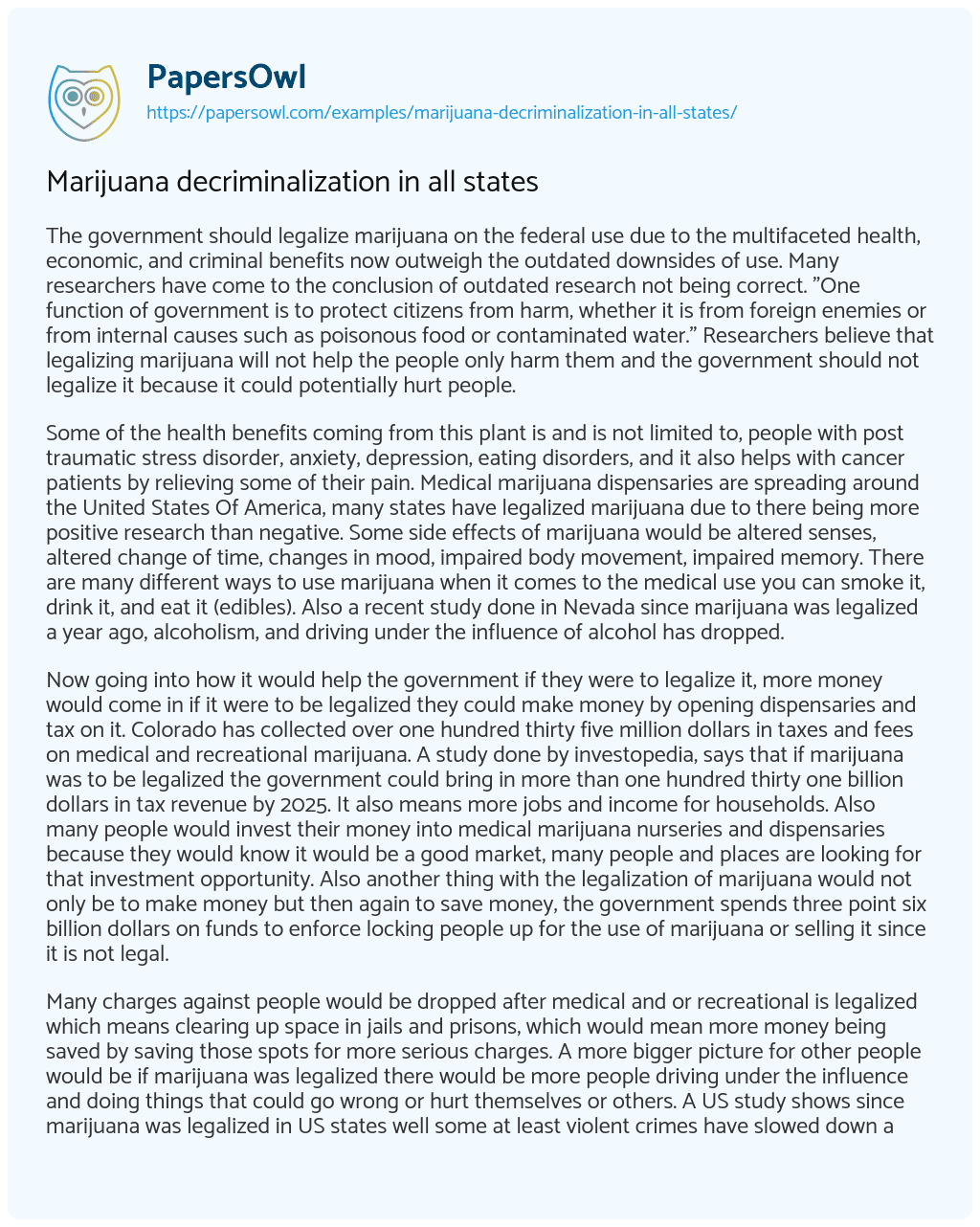 The government should legalize marijuana on the federal use due to the multifaceted health, economic, and criminal benefits now outweigh the outdated downsides of use. Many researchers have come to the conclusion of outdated research not being correct. “One function of government is to protect citizens from harm, whether it is from foreign enemies or from internal causes such as poisonous food or contaminated water.” Researchers believe that legalizing marijuana will not help the people only harm them and the government should not legalize it because it could potentially hurt people.

Some of the health benefits coming from this plant is and is not limited to, people with post traumatic stress disorder, anxiety, depression, eating disorders, and it also helps with cancer patients by relieving some of their pain. Medical marijuana dispensaries are spreading around the United States Of America, many states have legalized marijuana due to there being more positive research than negative. Some side effects of marijuana would be altered senses, altered change of time, changes in mood, impaired body movement, impaired memory. There are many different ways to use marijuana when it comes to the medical use you can smoke it, drink it, and eat it (edibles). Also a recent study done in Nevada since marijuana was legalized a year ago, alcoholism, and driving under the influence of alcohol has dropped.

Now going into how it would help the government if they were to legalize it, more money would come in if it were to be legalized they could make money by opening dispensaries and tax on it. Colorado has collected over one hundred thirty five million dollars in taxes and fees on medical and recreational marijuana. A study done by investopedia, says that if marijuana was to be legalized the government could bring in more than one hundred thirty one billion dollars in tax revenue by 2025. It also means more jobs and income for households. Also many people would invest their money into medical marijuana nurseries and dispensaries because they would know it would be a good market, many people and places are looking for that investment opportunity. Also another thing with the legalization of marijuana would not only be to make money but then again to save money, the government spends three point six billion dollars on funds to enforce locking people up for the use of marijuana or selling it since it is not legal.

Many charges against people would be dropped after medical and or recreational is legalized which means clearing up space in jails and prisons, which would mean more money being saved by saving those spots for more serious charges. A more bigger picture for other people would be if marijuana was legalized there would be more people driving under the influence and doing things that could go wrong or hurt themselves or others. A US study shows since marijuana was legalized in US states well some at least violent crimes have slowed down and dropped. Since the 1970’s more than 20 states have decriminalized marijuana. One major thing you hear with the use of marijuana is it is a “gateway” drug which means it opens the doors to many other drugs that do not have many good or positive attributes.

There are not many negative views on the legalization or decriminalization of marijuana. According to a recent study it showed only nine percent of people who try marijuana get addicted to it. A big reason many people are worried about the legalization of marijuana would be driving while intoxicated and hurting the people in the care or others. Others think that it should not be legalized because the side effects can change so much about the person when he or she is not sober. People in a study done by researchers has shown that people think marijuana use is worse than alcohol and tobacco use. People tend to say it is a myth that marijuana does not have any good in it some say the same thing but vise-versa. Sixty two percent of people say that marijuana should be legalized and decriminalized.

So in all marijuana should be legalized and decriminalized in all states and that all states should support it.

Marijuana as a Psychoactive Drug

Legalization of Marijuana Throughout States