Loneliness in “Catcher in the Rye” 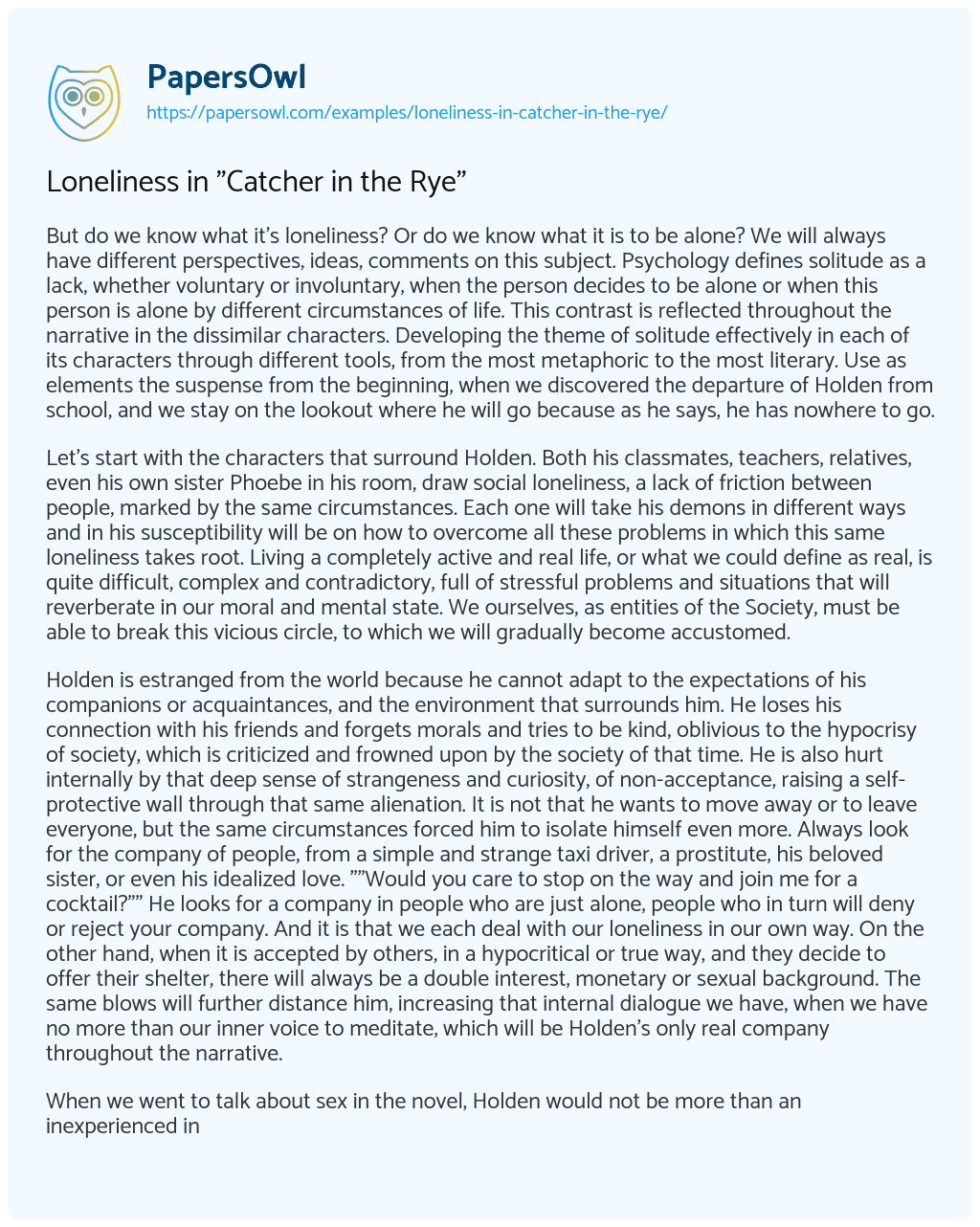 But do we know what it’s loneliness? Or do we know what it is to be alone? We will always have different perspectives, ideas, comments on this subject. Psychology defines solitude as a lack, whether voluntary or involuntary, when the person decides to be alone or when this person is alone by different circumstances of life. This contrast is reflected throughout the narrative in the dissimilar characters. Developing the theme of solitude effectively in each of its characters through different tools, from the most metaphoric to the most literary. Use as elements the suspense from the beginning, when we discovered the departure of Holden from school, and we stay on the lookout where he will go because as he says, he has nowhere to go.

Let’s start with the characters that surround Holden. Both his classmates, teachers, relatives, even his own sister Phoebe in his room, draw social loneliness, a lack of friction between people, marked by the same circumstances. Each one will take his demons in different ways and in his susceptibility will be on how to overcome all these problems in which this same loneliness takes root. Living a completely active and real life, or what we could define as real, is quite difficult, complex and contradictory, full of stressful problems and situations that will reverberate in our moral and mental state. We ourselves, as entities of the Society, must be able to break this vicious circle, to which we will gradually become accustomed.

Holden is estranged from the world because he cannot adapt to the expectations of his companions or acquaintances, and the environment that surrounds him. He loses his connection with his friends and forgets morals and tries to be kind, oblivious to the hypocrisy of society, which is criticized and frowned upon by the society of that time. He is also hurt internally by that deep sense of strangeness and curiosity, of non-acceptance, raising a self-protective wall through that same alienation. It is not that he wants to move away or to leave everyone, but the same circumstances forced him to isolate himself even more. Always look for the company of people, from a simple and strange taxi driver, a prostitute, his beloved sister, or even his idealized love. “”Would you care to stop on the way and join me for a cocktail?”” He looks for a company in people who are just alone, people who in turn will deny or reject your company. And it is that we each deal with our loneliness in our own way. On the other hand, when it is accepted by others, in a hypocritical or true way, and they decide to offer their shelter, there will always be a double interest, monetary or sexual background. The same blows will further distance him, increasing that internal dialogue we have, when we have no more than our inner voice to meditate, which will be Holden’s only real company throughout the narrative.

When we went to talk about sex in the novel, Holden would not be more than an inexperienced in these matters. Like any other typical teenager, Holden is in a constant struggle with his sexuality. Desperately looking for sex, even with a paid prostitute; he seeks consolation in some girlfriend, which should be perfect for his consolation, and if he could find a sexual refugee through this perfect being it would be ideal for a total emotional intimacy, according to his perception. Self-considering himself as a “”sexual maniac,”” but what is his position first of all this sexual torment? Holden has deep and insecure feelings towards women, and sometimes even contradictory towards men. The women who surround her environment see them as stupid, just for the fact of being interested in things like children and men, to whom Holden knows from experience that they are not good at all. On the other hand he sees perfection in the character of Jane Gallagher, idealizing her as someone who is affectionate, kind, innocent, but deep down he knows that she is not so perfect either, or at least it is what he shows us in the failed attempts to call her, in that constant fear of talking to her.

But could we call Holden homosexual? Do we know how he identifies himself in this situation? Holden is a teenager, and as a typical teenager at the end, we can not deposit our total confidence. He is going through that period for which we all spend, a period of doubt, ambiguity, curiosity, wanting to try, wanting to experience and know what we do not like, or if we would like. The way he characterizes and draws both, men and women, is interesting, but that way of describing a man does it by a mere taste or attraction? Or does he do it for a state of self-identification? We will never know exactly, we could identify it as some kind of homosexual orientation, but at the same time, this whole idea falls apart with his dramatic reaction towards his English teacher. As he tells us about his opinion regarding a homosexual taste, but his unbridled reaction will be precise because of his teacher’s homosexual attraction, which may not have been that, but more than Holden’s ideas. Or can Holden’s reaction be due to the sick idea of pedophilia? Or are we simply faced with an echo of non-acceptance, in a homophobic situation, where we will reflect the hate and all our feelings and desires towards the other person as a projection of what we really are? We will not know that clearly either, because Holden is exactly the kind of teenager you could never trust.

We will be fewer men, less heterosexual, just for the sake of knowing how to value even more the masculine beauty, our same beauty? Or perhaps we will not be fewer men knowing how to recognize feminine issues of beauty in details? How can we measure what is and what is not in sexual matters in a teenager? We’ll have to taste the shit to know what we like, in the same way, that Holden must try sex to know what he identifies with? The masturbate, the self-exploration, the power to enjoy ourselves, to be self-satisfied, who better than us to be able to know those exact places? Can we criticize Holden for this? Or are we being hypocrites in not admitting that these are normal and pleasurable issues in us human beings? And if we believe that we are wrong, we have not yet learned what it is to live, what it is to enjoy, it may sound like something repetitive, but are we so fucked up to judge a teenager even when we’re older, we still having these experiences in secret?

Loneliness in "Catcher in the Rye". (2020, Mar 07). Retrieved from https://papersowl.com/examples/loneliness-in-catcher-in-the-rye/

Catcher in the Rye Growing up Theme

Analysis of the Catcher in the Rye by J.D. Salinger

Mental Health of Teens and the Catcher in the Rye

Childhood and Adulthood in the Catcher in the Rye

A Catcher in the Rye Theme

The Catcher in the Rye Symbolism