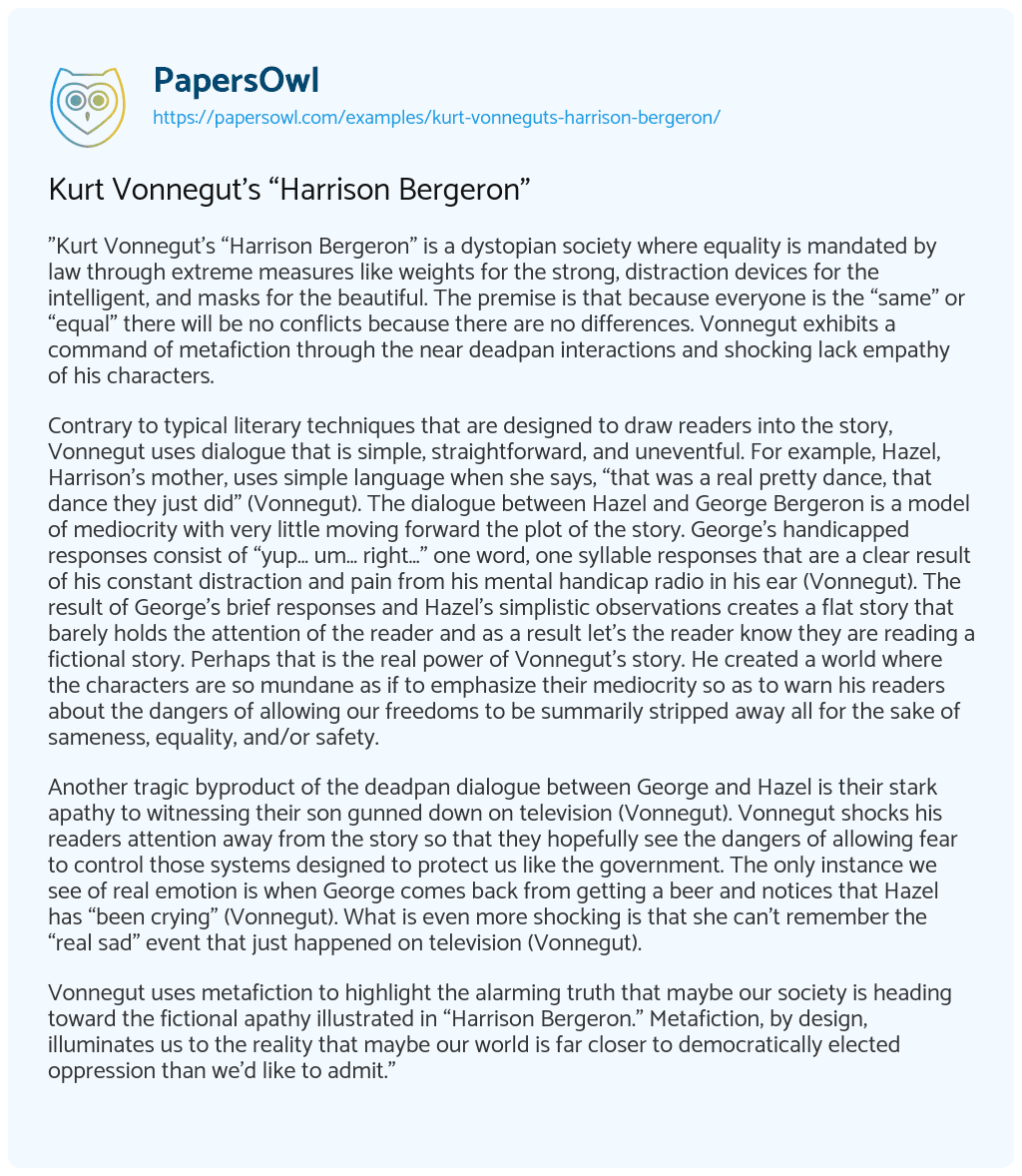 “Kurt Vonnegut’s “Harrison Bergeron” is a dystopian society where equality is mandated by law through extreme measures like weights for the strong, distraction devices for the intelligent, and masks for the beautiful. The premise is that because everyone is the “same” or “equal” there will be no conflicts because there are no differences. Vonnegut exhibits a command of metafiction through the near deadpan interactions and shocking lack empathy of his characters.

Contrary to typical literary techniques that are designed to draw readers into the story, Vonnegut uses dialogue that is simple, straightforward, and uneventful. For example, Hazel, Harrison’s mother, uses simple language when she says, “that was a real pretty dance, that dance they just did” (Vonnegut). The dialogue between Hazel and George Bergeron is a model of mediocrity with very little moving forward the plot of the story. George’s handicapped responses consist of “yup… um… right…” one word, one syllable responses that are a clear result of his constant distraction and pain from his mental handicap radio in his ear (Vonnegut). The result of George’s brief responses and Hazel’s simplistic observations creates a flat story that barely holds the attention of the reader and as a result let’s the reader know they are reading a fictional story. Perhaps that is the real power of Vonnegut’s story. He created a world where the characters are so mundane as if to emphasize their mediocrity so as to warn his readers about the dangers of allowing our freedoms to be summarily stripped away all for the sake of sameness, equality, and/or safety.

Another tragic byproduct of the deadpan dialogue between George and Hazel is their stark apathy to witnessing their son gunned down on television (Vonnegut). Vonnegut shocks his readers attention away from the story so that they hopefully see the dangers of allowing fear to control those systems designed to protect us like the government. The only instance we see of real emotion is when George comes back from getting a beer and notices that Hazel has “been crying” (Vonnegut). What is even more shocking is that she can’t remember the “real sad” event that just happened on television (Vonnegut).

Vonnegut uses metafiction to highlight the alarming truth that maybe our society is heading toward the fictional apathy illustrated in “Harrison Bergeron.” Metafiction, by design, illuminates us to the reality that maybe our world is far closer to democratically elected oppression than we’d like to admit.”

Equality Versus Freedom in ‘‘Harrison Bergeron” by Kurt Vonnegut