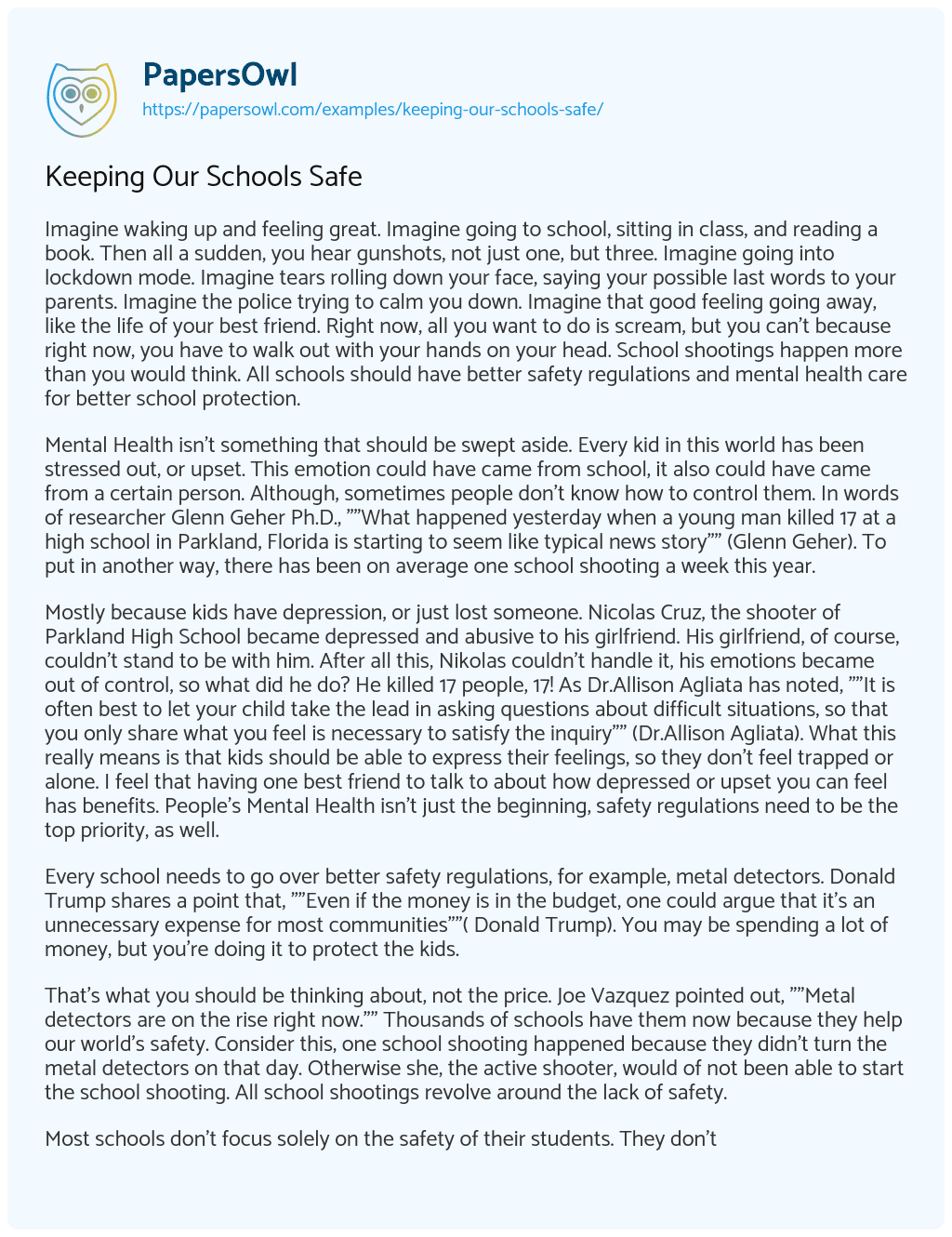 Imagine waking up and feeling great. Imagine going to school, sitting in class, and reading a book. Then all a sudden, you hear gunshots, not just one, but three. Imagine going into lockdown mode. Imagine tears rolling down your face, saying your possible last words to your parents. Imagine the police trying to calm you down. Imagine that good feeling going away, like the life of your best friend. Right now, all you want to do is scream, but you can’t because right now, you have to walk out with your hands on your head. School shootings happen more than you would think. All schools should have better safety regulations and mental health care for better school protection.

Mental Health isn’t something that should be swept aside. Every kid in this world has been stressed out, or upset. This emotion could have came from school, it also could have came from a certain person. Although, sometimes people don’t know how to control them. In words of researcher Glenn Geher Ph.D., “”What happened yesterday when a young man killed 17 at a high school in Parkland, Florida is starting to seem like typical news story”” (Glenn Geher). To put in another way, there has been on average one school shooting a week this year.

Mostly because kids have depression, or just lost someone. Nicolas Cruz, the shooter of Parkland High School became depressed and abusive to his girlfriend. His girlfriend, of course, couldn’t stand to be with him. After all this, Nikolas couldn’t handle it, his emotions became out of control, so what did he do? He killed 17 people, 17! As Dr.Allison Agliata has noted, “”It is often best to let your child take the lead in asking questions about difficult situations, so that you only share what you feel is necessary to satisfy the inquiry”” (Dr.Allison Agliata). What this really means is that kids should be able to express their feelings, so they don’t feel trapped or alone. I feel that having one best friend to talk to about how depressed or upset you can feel has benefits. People’s Mental Health isn’t just the beginning, safety regulations need to be the top priority, as well.

Every school needs to go over better safety regulations, for example, metal detectors. Donald Trump shares a point that, “”Even if the money is in the budget, one could argue that it’s an unnecessary expense for most communities””( Donald Trump). You may be spending a lot of money, but you’re doing it to protect the kids.

Most schools don’t focus solely on the safety of their students. They don’t usually have a police officer who stays there until the end of the day. While skeptical at first, I now agree with Scm who argues, “”Schools should have security entrances with armed guards and metal detectors similar to courthouses and airports”” (Scm). Why should it be so hard to get into an airport, but not a school; this should interest those who want to save children.

Beyond this limited audience, however, my point should speak to anyone who cares about the larger issue of safety. In this essay, Washington post reveals, “”Even kids who come from middle-class and upper-middle-class communities literally don’t feel safe in school”” (Washington post). This data implies that clearly, we need to be doing something if kids don’t feel safe at their own school.

There should be no reason not to feel safe there. Unfortunately, kids don’t feel safe, and they shouldn’t feel safe. Gun rights put a huge stamp on this, as well. Even though guns can protect you, they’re not really doing that. People use these weapons to hurt people instead of saving them. The United States had made so many gun laws, but I feel a lot of them have not made an impact. Basically, these quotes both have a hardcore meaning, that every school needs better protection. Protecting your friends, your school, and most importantly, yourself.

Protecting yourself is so important these days. All schools should have better safety regulations and mental health care for better school protection. Then, you could finally imagine waking up and actually having a good day. In order to do so, there are several ways to make an impact. Calling your local senators, and discussing your worries can be an effective way to make a change.

Senators have been elected to speak out for you, so use that to your advantage. Another way can be to alert a teacher, or an adult you trust if you see anything out of the ordinary. Seeing crude pictures, alarming captions, and explicit threats – these can be examples of times when you should contact authorities. It might seem like trivial tasks, but these ways have saved many schools from disastrous attacks.

Essay about Guns in Schools

The Impact of School Shootings

How Can we Stop Shootings in our Schools