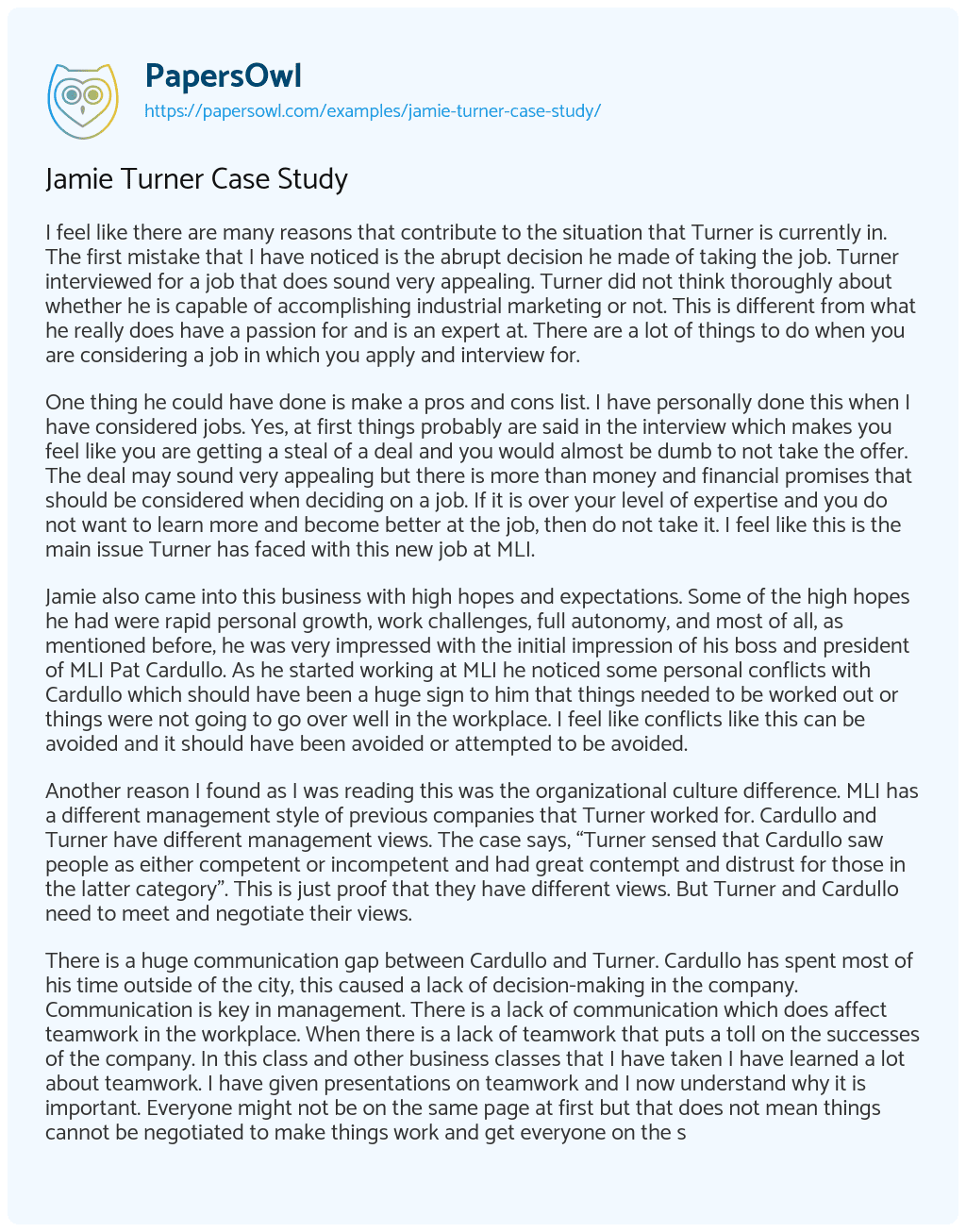 I feel like there are many reasons that contribute to the situation that Turner is currently in. The first mistake that I have noticed is the abrupt decision he made of taking the job. Turner interviewed for a job that does sound very appealing. Turner did not think thoroughly about whether he is capable of accomplishing industrial marketing or not. This is different from what he really does have a passion for and is an expert at. There are a lot of things to do when you are considering a job in which you apply and interview for.

One thing he could have done is make a pros and cons list. I have personally done this when I have considered jobs. Yes, at first things probably are said in the interview which makes you feel like you are getting a steal of a deal and you would almost be dumb to not take the offer. The deal may sound very appealing but there is more than money and financial promises that should be considered when deciding on a job. If it is over your level of expertise and you do not want to learn more and become better at the job, then do not take it. I feel like this is the main issue Turner has faced with this new job at MLI.

Jamie also came into this business with high hopes and expectations. Some of the high hopes he had were rapid personal growth, work challenges, full autonomy, and most of all, as mentioned before, he was very impressed with the initial impression of his boss and president of MLI Pat Cardullo. As he started working at MLI he noticed some personal conflicts with Cardullo which should have been a huge sign to him that things needed to be worked out or things were not going to go over well in the workplace. I feel like conflicts like this can be avoided and it should have been avoided or attempted to be avoided.

Another reason I found as I was reading this was the organizational culture difference. MLI has a different management style of previous companies that Turner worked for. Cardullo and Turner have different management views. The case says, “Turner sensed that Cardullo saw people as either competent or incompetent and had great contempt and distrust for those in the latter category”. This is just proof that they have different views. But Turner and Cardullo need to meet and negotiate their views.

There is a huge communication gap between Cardullo and Turner. Cardullo has spent most of his time outside of the city, this caused a lack of decision-making in the company. Communication is key in management. There is a lack of communication which does affect teamwork in the workplace. When there is a lack of teamwork that puts a toll on the successes of the company. In this class and other business classes that I have taken I have learned a lot about teamwork. I have given presentations on teamwork and I now understand why it is important. Everyone might not be on the same page at first but that does not mean things cannot be negotiated to make things work and get everyone on the same page.

I feel like Jamie Turner had freedom in solving problems. But Turner’s perception of this freedom wasn’t the correct perception to have. I feel like he does not do a great job on painting many pictures to solve problems. It is more like one idea comes up and then he does not think of other ways that might even be better to approach the situation. I also feel like Turner lacks the ability to be a team member who helps promote at teamwork. Teamwork is key to success, especially in business.

I feel like the key issue is communication. Turner understands its strength in the knowledge and perspectives of business, unlike Cardullo. I also do think that Turner’s communication skills kind of has him in a standstill. He has an issue with Cardullo and he for sure needs to mention something to Cardullo in a professional way. Turner doesn’t analyze a lot of issues and problems within the company. When Cardullo gives additional responsibilities, I feel like Turner does not take immediate action to take on these responsibilities.

The additional responsibilities do require more time out of Turner’s schedule. If he does not think he can handle it he should mention something to Cardullo and have someone else take on responsibilities. If Cardullo and Turner work on being more open with each other this will help processes within the company go faster. It almost lacks there is a lack of progress because of their lack of communication and working as a team together. They have both made errors but the main issue is the lack of communication within the company.

Turner should remember to not back out on talking to Cardullo. Turner needs to collect all the facts that he can. He needs to be able cover all assets and issues, he needs to have facts as well. He also needs to remember to stay calm. If he doesn’t stay calm it is could easily cause many issues in the company and between him and Cardullo. It would not be fun to cause more issues.

The point of this is to fix all the issues to help them move on and keep progressing, they are holding the company back. He needs to explain everything to Cardullo, but he needs to do this in a professional and calm way. He needs to remember that he is a part of business and needs to handle this situation in a way that will not hurt his reputation but will help him and the company succeed. He needs to identify where there was a misunderstanding and how he can fix that. He needs to remember to add how he thinks things can be fixed and changed between them.

They are both in the wrong in some way and they both need to admit to this. In the book “5 Dysfunctions of a Team” It talks about avoiding accountability. Everyone is accountable for their mistakes and needs to own up to them. I do think it is possible to talk things over and fix what needs to be fixed for the company to keep progressing and succeeding. I think Turner and Cardullo can become an “A” team. It will just take time and change on both parts.

Identify the Critical Issue (s) in the Case