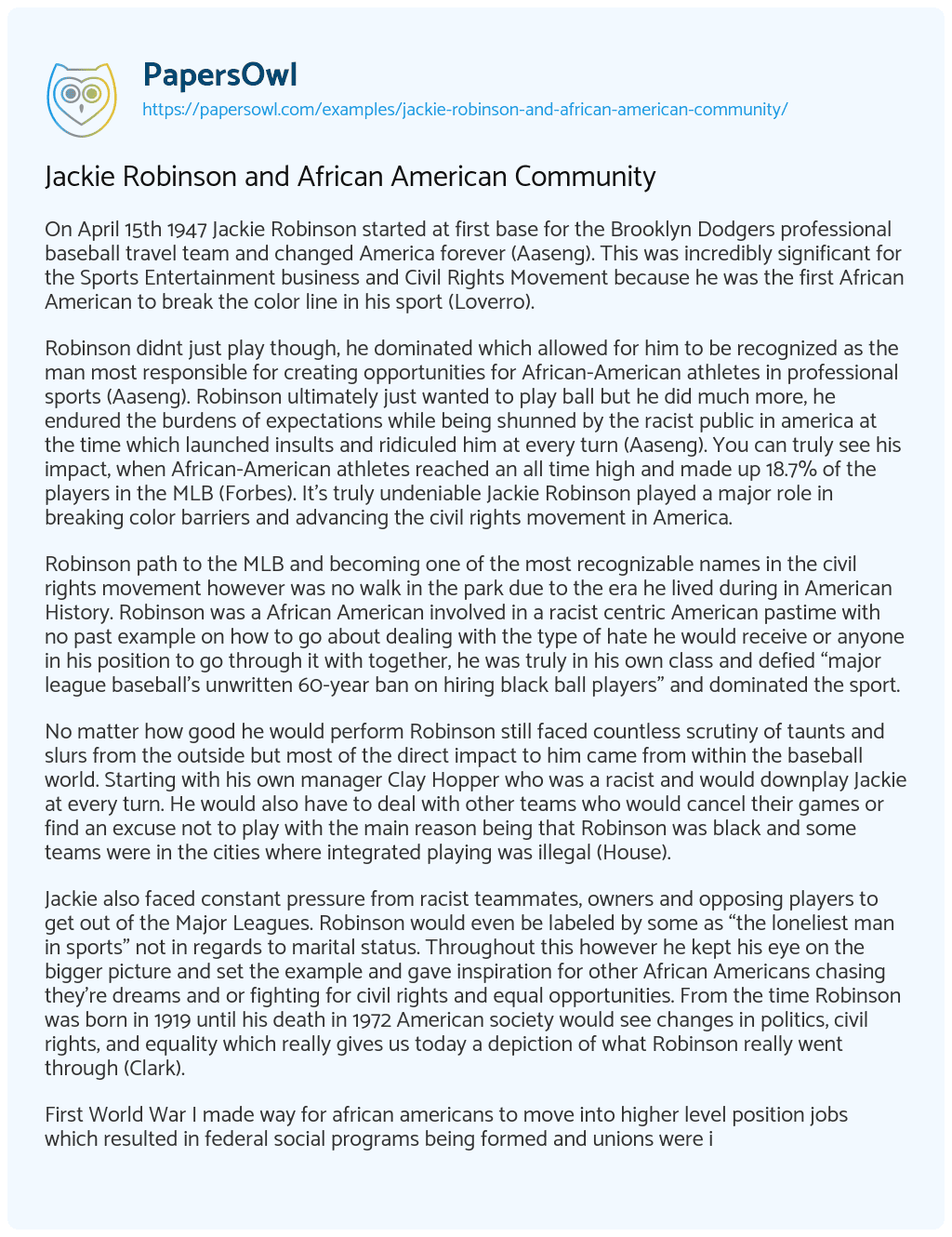 On April 15th 1947 Jackie Robinson started at first base for the Brooklyn Dodgers professional baseball travel team and changed America forever (Aaseng). This was incredibly significant for the Sports Entertainment business and Civil Rights Movement because he was the first African American to break the color line in his sport (Loverro).

Robinson didnt just play though, he dominated which allowed for him to be recognized as the man most responsible for creating opportunities for African-American athletes in professional sports (Aaseng). Robinson ultimately just wanted to play ball but he did much more, he endured the burdens of expectations while being shunned by the racist public in america at the time which launched insults and ridiculed him at every turn (Aaseng). You can truly see his impact, when African-American athletes reached an all time high and made up 18.7% of the players in the MLB (Forbes). It’s truly undeniable Jackie Robinson played a major role in breaking color barriers and advancing the civil rights movement in America.

Robinson path to the MLB and becoming one of the most recognizable names in the civil rights movement however was no walk in the park due to the era he lived during in American History. Robinson was a African American involved in a racist centric American pastime with no past example on how to go about dealing with the type of hate he would receive or anyone in his position to go through it with together, he was truly in his own class and defied “major league baseball’s unwritten 60-year ban on hiring black ball players” and dominated the sport.

No matter how good he would perform Robinson still faced countless scrutiny of taunts and slurs from the outside but most of the direct impact to him came from within the baseball world. Starting with his own manager Clay Hopper who was a racist and would downplay Jackie at every turn. He would also have to deal with other teams who would cancel their games or find an excuse not to play with the main reason being that Robinson was black and some teams were in the cities where integrated playing was illegal (House).

Jackie also faced constant pressure from racist teammates, owners and opposing players to get out of the Major Leagues. Robinson would even be labeled by some as “the loneliest man in sports” not in regards to marital status. Throughout this however he kept his eye on the bigger picture and set the example and gave inspiration for other African Americans chasing they’re dreams and or fighting for civil rights and equal opportunities. From the time Robinson was born in 1919 until his death in 1972 American society would see changes in politics, civil rights, and equality which really gives us today a depiction of what Robinson really went through (Clark).

First World War I made way for african americans to move into higher level position jobs which resulted in federal social programs being formed and unions were integrated and gave somewhat of job security to African American workers (Clark). As for the civil rights movement and politics in 1927 the Supreme Court declared unconstitutional of “white primaries”, Southern states had a constitutional means to exclude African Americans from voting which gravely impacted civil rights (Clark).

Harry Truman created the President’s Committee on Civil Rights, During this time the famous trial of Brown v. Board of Education also took place which was grave. Finally ofcourse Robinson created opportunities for African Americans in various professional fields (Clark). Although it wasn’t until the year 1949 where Robinson finally began to take a bigger stand against injustice (Aaseng). Jackie completed his best career year in the MLB with the Dodgers where he led the league in batting and runs and was then voted as the league’s most valuable player in (Aaseng).

This finally proved that Robinson definitely belonged in the pro’s so he began to fight back harder than ever against the hate,criticism and discrimination and began asking for his respect. He even stated “ I never cared about acceptance as much as I cared about respect”. This helped move forward the civil rights movement by finally solidifying a spot for african americans in professional sports and giving Jackie a bigger platform to speak out against injustice (Aaseng).

He did this all while suffering an endless barrage of insults and ridicule from violently prejudiced white baseball fans and being portrayed in a negative light at every corner by the white media who would look to focus in on his failure’s and use them to spread negative propaganda on African Americans (Clark). This scrutinizing microscope he was under was the reason it was so important that he carried himself in the correct fashion and led a right example which all contributed to the civil rights movement because it showed the America and the World African Americans are more than the lies and propaganda being spread at that time in America.

Throughout his career you could constantly see Robinson putting the African American community before himself for example after Ben Chapman Racist Actings he puts it all aside and takes a picture with him for the greater good of showing the America people can change which further progressed the civil rights movement and gave the Dodgers positive media attention while showing African Americans in a good forgiving light. That was only the beginning however, Robinson would later begin to really get involved in the problems facing the African American Community in America.

Besides his constant outcry and determination for equal rights and opportunity once close to retirement Robinson “ exploded myths about African-American inferiority, and the door was immediately opened for other black athletes in pro baseball” and after retirement he delved himself into a construction company specializing in housing for blacks, and in social and political causes that of course supported African Americans and the civil rights movement (Aaseng).

Robinson in elderly age would even often go to civil rights marches and events. He knew these events would get bigger media coverage with his presence there and would often send a message to the youth of how important it is to be involved by often bringing his children along with him. Robinson was known for investing in the youth (Clark). By bringing his children it was is his way of saying that the younger generation would be the ones to make the change in society and guide it away from social injustice and racism.

After his death Robinson left an incomparable Legacy on the world and America. He helped help change the perception of African Americans in the world and MLB. He disapproved to white Americans the ridiculous racist claims that black Americans were mentally and physically not capable of competing at the greatest level.

White fans where then looking at black baseball players as heroes in a way while also giving other African Americans satisfaction in seeing black talent recognized and showing them that their worth something. In the end he was perceived as a Hero in the eyes of many and even achieved such fame that his story was made into a comic book in 1951 which speaks volume because it’s not a derogatory image of an African American which at the time was pretty rare (House) unprecedented mark on the world of baseball as he was inducted into the hall of fame and considered one of the greatest to ever take step on the diamond. He was seen as a civil rights activist and as the man single handedly responsible for creating opportunities for Blacks in baseball and sports. Until this day his legacy is spread throughout the world and is no question what he did for the African American community (House).

Jackie Robinson and African American Community. (2021, May 14). Retrieved from https://papersowl.com/examples/jackie-robinson-and-african-american-community/