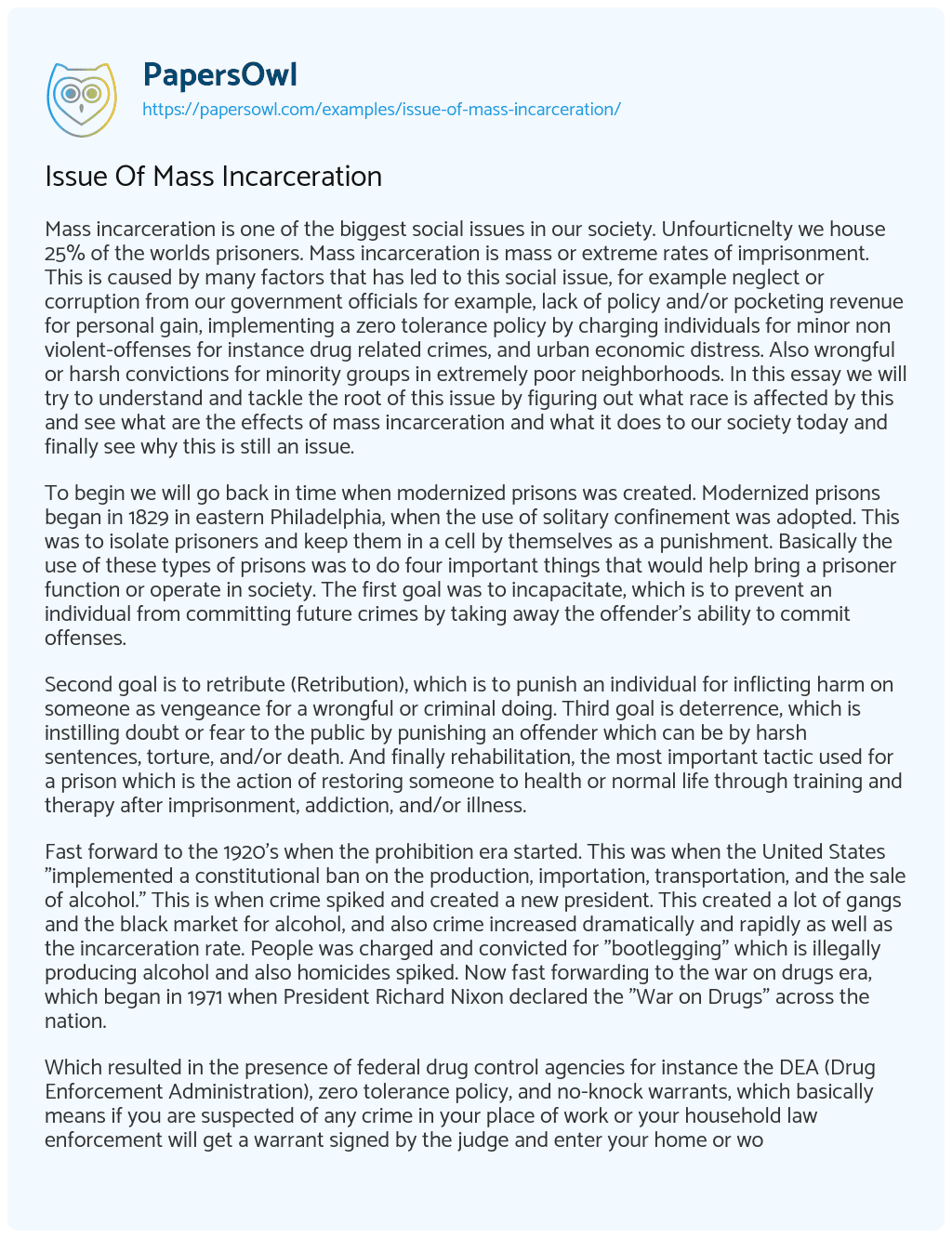 Mass incarceration is one of the biggest social issues in our society. Unfourticnelty we house 25% of the worlds prisoners. Mass incarceration is mass or extreme rates of imprisonment. This is caused by many factors that has led to this social issue, for example neglect or corruption from our government officials for example, lack of policy and/or pocketing revenue for personal gain, implementing a zero tolerance policy by charging individuals for minor non violent-offenses for instance drug related crimes, and urban economic distress. Also wrongful or harsh convictions for minority groups in extremely poor neighborhoods. In this essay we will try to understand and tackle the root of this issue by figuring out what race is affected by this and see what are the effects of mass incarceration and what it does to our society today and finally see why this is still an issue.

To begin we will go back in time when modernized prisons was created. Modernized prisons began in 1829 in eastern Philadelphia, when the use of solitary confinement was adopted. This was to isolate prisoners and keep them in a cell by themselves as a punishment. Basically the use of these types of prisons was to do four important things that would help bring a prisoner function or operate in society. The first goal was to incapacitate, which is to prevent an individual from committing future crimes by taking away the offender’s ability to commit offenses.

Second goal is to retribute (Retribution), which is to punish an individual for inflicting harm on someone as vengeance for a wrongful or criminal doing. Third goal is deterrence, which is instilling doubt or fear to the public by punishing an offender which can be by harsh sentences, torture, and/or death. And finally rehabilitation, the most important tactic used for a prison which is the action of restoring someone to health or normal life through training and therapy after imprisonment, addiction, and/or illness.

Fast forward to the 1920’s when the prohibition era started. This was when the United States “implemented a constitutional ban on the production, importation, transportation, and the sale of alcohol.” This is when crime spiked and created a new president. This created a lot of gangs and the black market for alcohol, and also crime increased dramatically and rapidly as well as the incarceration rate. People was charged and convicted for “bootlegging” which is illegally producing alcohol and also homicides spiked. Now fast forwarding to the war on drugs era, which began in 1971 when President Richard Nixon declared the “War on Drugs” across the nation.

Which resulted in the presence of federal drug control agencies for instance the DEA (Drug Enforcement Administration), zero tolerance policy, and no-knock warrants, which basically means if you are suspected of any crime in your place of work or your household law enforcement will get a warrant signed by the judge and enter your home or work space without any immediate prior notification of the residents or colleagues, for instance by knocking or ringing a doorbell. In theory this was supposed to make society a drug free place, it would have punished manufacturers, distributors and users of illegal drugs, and last but not least deter or lessen drug-related crimes. It did do a little of what it was intended to do, but unfortunately overall, this policy has snowballed into something that has not been translated well in society.

Here’s why, wide spread corruption occurred during this time. For instance, Political analyst saw a projected increase in corruption within the United States government because of the funds that was allocated to control drug abuse, in some cases was used for their interest (Government Officials) and possibly went in their pockets. Second issue is creates a smokescreen to hide the real problem behind drug abuse and its sales because most people who are dealing the drugs are usually poor and need some sort of income to support themselves and family, and for the people who use them, law enforcement wouldn’t understand as to why they people use these drug they might have mental traumas which its usages is to help medicate themselves.

Third issue is increase racial tension, which was the soaring arrests, disproportionately targeting African Americans, according to the Human Rights Watch. And finally, Disparity in sentencing, for example, those convicted for possession of 5 grams of crack and those in possession of 500 grams of powdered cocaine basically have the same punishment, minimum mandatory sentence of being incarcerated in a federal prison for 5 years.

This has spiked incarceration rate during the presidency of Ronald Reagan in 1981, largely thanks to his unprecedented expansion of the war on drugs. His wife Nancy Reagan began an anti-drug campaign, with the slogan called “Just Say No!”. Which basically brainwashed society and blindly demonized any and every drug user not by understanding as to why people use them or sell them in the first place.

Now, who are the people who are getting convicted the most in the United States? African Americans are first and hispanics are second,  “African Americans are incarcerated at more than 5 times the rate of whites. And hispanics are 4 times the rate of whites.” With that being said this leads to overcrowding in our prisons. Whites commit the same crimes as hispanics and african americans but both minority groups get convicted at a higher rate. Why?

This ties to family relations and economic stability. Approximately 25 percent of african american children in the United States have experienced a parent in most cases a father being imprisoned for some period of time. From an economic standpoint, poor individuals have more of a chance of getting convicted because they can’t afford to hire a good lawyer to represent them.

Our government officials. For example prosecutors, they are the most powerful actors in the court system here’s why. The reason is because they are given so much discretion to prosecute however they see fit. They basically bring the evidence and and try to convince the judge and the jury why the offender must be sent away to prison.  “For example, former Brooklyn District Attorney Kenneth Thompson in 2014 announced that he would no longer enforce low-level marijuana arrests.” Marijuana is still illegal in New York state, and oddly enough it’s completely within his discretion to determine if he wants to prosecute the offender or not. With the ideology and the narrative that these government officials spread they basically can prosecute people of their choice.

The negative effects of all these are overcrowding of the prisons. Which makes the prison use lots of resources which costs money. Who pays for this?, us. Public prisons use our tax dollars in order to fund the prison. Our government spends more on prisoners than they do on our education system in the United States. Since there’s a major issue when it comes to over populating of public prisons, the federal government reaches out to private prisons to help out.

The way private prisons get the funds for resources and correction officers is by receiving subsidies by the government and profiting off of each prisoner. That’s why they encourage the government to convict people, but they have the ability to accept they want in there facility. They are known, however, to not accept offenders who are costly to house. For example, Medical conditions, mental health issues, and dietary requirements all increase the cost of an offender.

We as a society prefer to have all the offenders locked away for good in most cases. Regardless of the offense, but sadly when an inmate is released into society they are more likely to go back. Here’s why, according to NAACP “A criminal record can reduce the likelihood of a callback or job offer by nearly 50 percent.” In most cases these criminals don’t have contact with friends or relatives. They lack support from peers and usually end up back and in other cases their to poor and life is hard for them to move around so they purposely commit a crime to go back.

In conclusion, our examination of the causes and consequences of high rates of incarceration has been lengthy. There are a two suggestions as to what can help reduce this issue significantly. First proposal, is for the nation take positive steps to treat all prisoners humanely and fairly and to provide prisons with proper resources. “Second proposal is to complement a reduction in incarceration and ensure that it does not further disadvantage poor communities, we should review social policies to address the needs for health care, housing, and employment.”

How to Deal with Mass Incarceration

Mass Incarceration in the United States