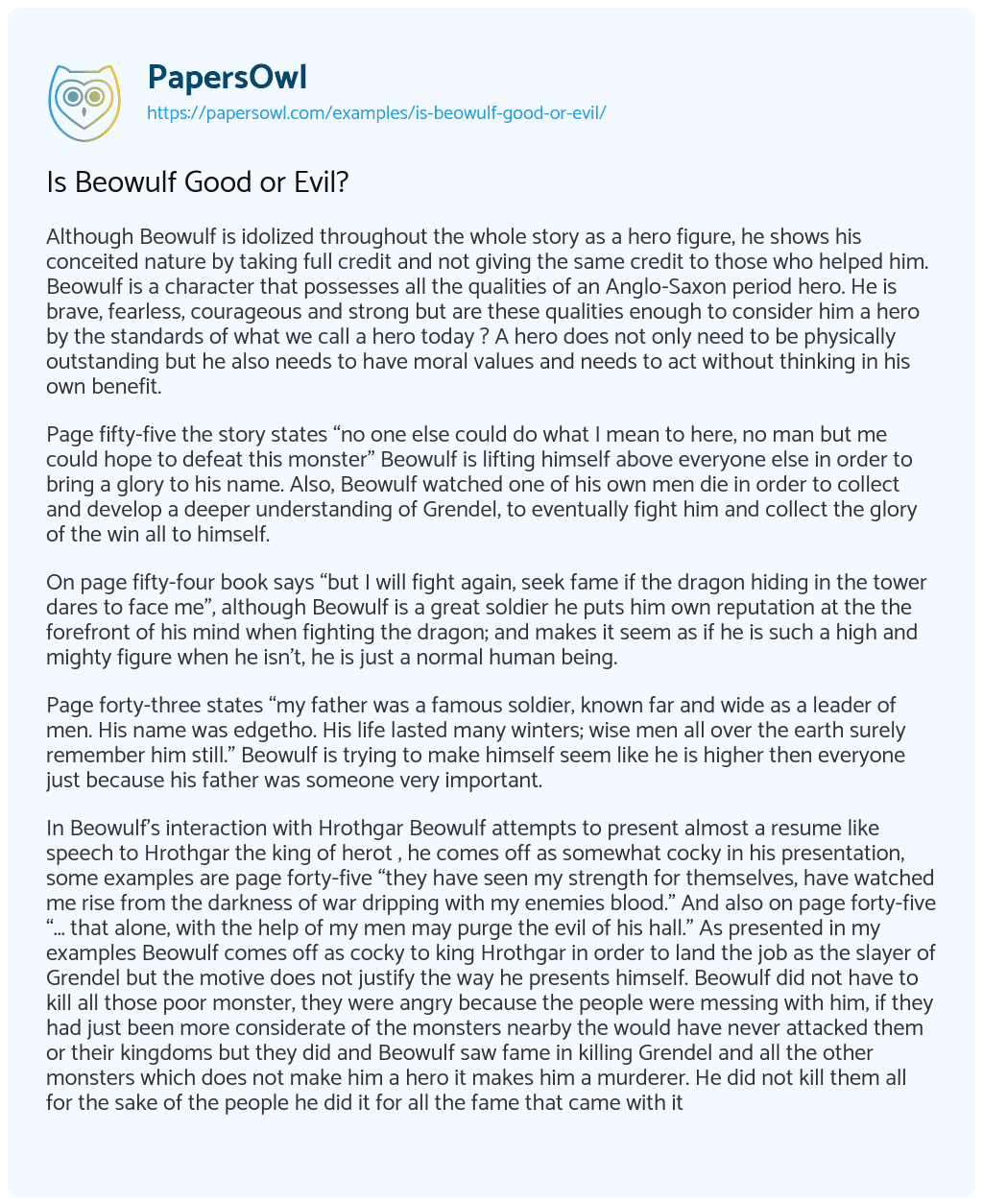 Although Beowulf is idolized throughout the whole story as a hero figure, he shows his conceited nature by taking full credit and not giving the same credit to those who helped him. Beowulf is a character that possesses all the qualities of an Anglo-Saxon period hero. He is brave, fearless, courageous and strong but are these qualities enough to consider him a hero by the standards of what we call a hero today ? A hero does not only need to be physically outstanding but he also needs to have moral values and needs to act without thinking in his own benefit.

Page fifty-five the story states “no one else could do what I mean to here, no man but me could hope to defeat this monster” Beowulf is lifting himself above everyone else in order to bring a glory to his name. Also, Beowulf watched one of his own men die in order to collect and develop a deeper understanding of Grendel, to eventually fight him and collect the glory of the win all to himself.

On page fifty-four book says “but I will fight again, seek fame if the dragon hiding in the tower dares to face me”, although Beowulf is a great soldier he puts him own reputation at the the forefront of his mind when fighting the dragon; and makes it seem as if he is such a high and mighty figure when he isn’t, he is just a normal human being.

Page forty-three states “my father was a famous soldier, known far and wide as a leader of men. His name was edgetho. His life lasted many winters; wise men all over the earth surely remember him still.” Beowulf is trying to make himself seem like he is higher then everyone just because his father was someone very important.

In Beowulf’s interaction with Hrothgar Beowulf attempts to present almost a resume like speech to Hrothgar the king of herot , he comes off as somewhat cocky in his presentation, some examples are page forty-five “they have seen my strength for themselves, have watched me rise from the darkness of war dripping with my enemies blood.” And also on page forty-five “… that alone, with the help of my men may purge the evil of his hall.” As presented in my examples Beowulf comes off as cocky to king Hrothgar in order to land the job as the slayer of Grendel but the motive does not justify the way he presents himself. Beowulf did not have to kill all those poor monster, they were angry because the people were messing with him, if they had just been more considerate of the monsters nearby the would have never attacked them or their kingdoms but they did and Beowulf saw fame in killing Grendel and all the other monsters which does not make him a hero it makes him a murderer. He did not kill them all for the sake of the people he did it for all the fame that came with it

Is Beowulf Good or Evil?. (2021, Apr 26). Retrieved from https://papersowl.com/examples/is-beowulf-good-or-evil/