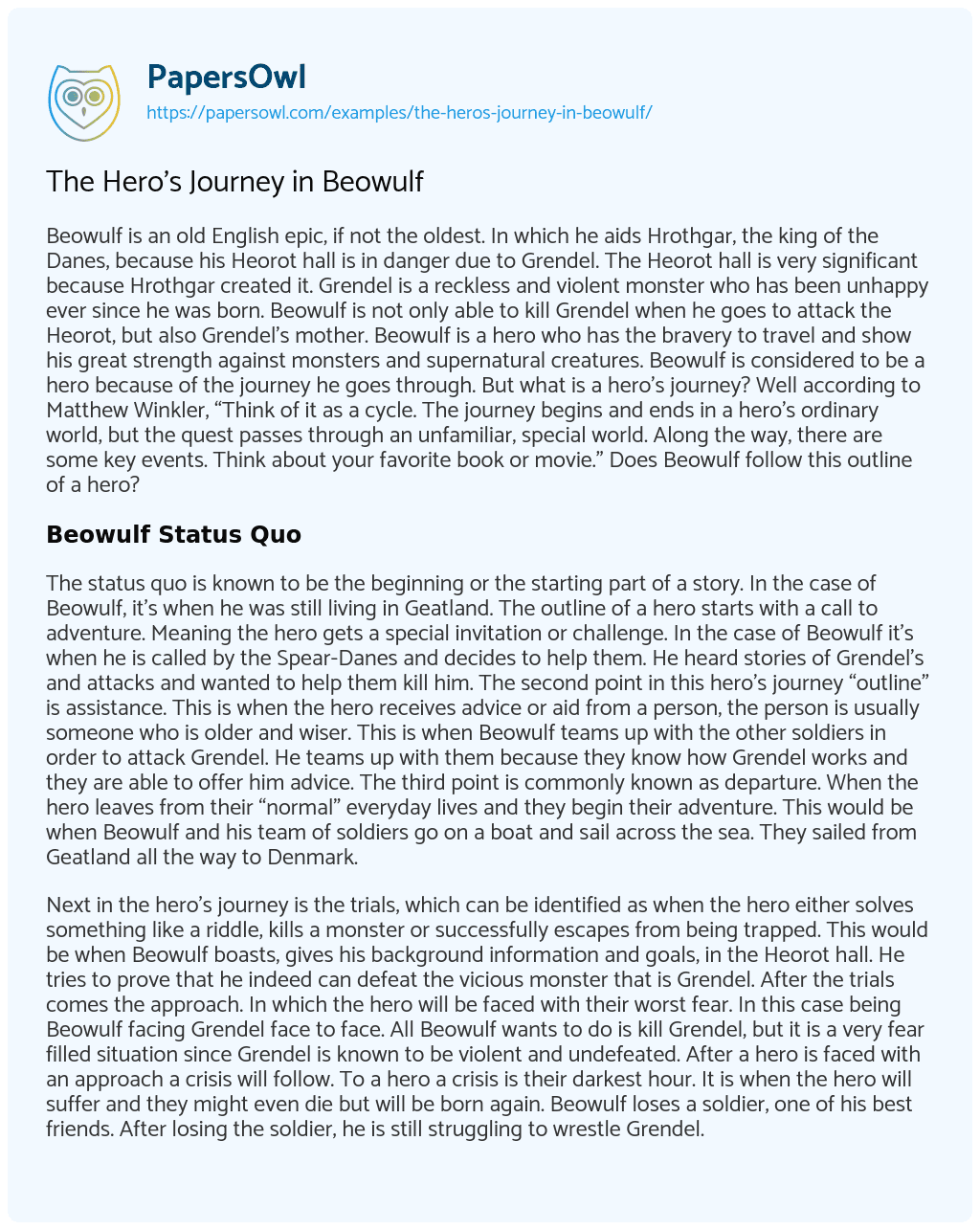 Beowulf is an old English epic, if not the oldest. In which he aids Hrothgar, the king of the Danes, because his Heorot hall is in danger due to Grendel. The Heorot hall is very significant because Hrothgar created it. Grendel is a reckless and violent monster who has been unhappy ever since he was born. Beowulf is not only able to kill Grendel when he goes to attack the Heorot, but also Grendel’s mother. Beowulf is a hero who has the bravery to travel and show his great strength against monsters and supernatural creatures. Beowulf is considered to be a hero because of the journey he goes through. But what is a hero’s journey? Well according to Matthew Winkler, “Think of it as a cycle. The journey begins and ends in a hero’s ordinary world, but the quest passes through an unfamiliar, special world. Along the way, there are some key events. Think about your favorite book or movie.” Does Beowulf follow this outline of a hero?

The status quo is known to be the beginning or the starting part of a story. In the case of Beowulf, it’s when he was still living in Geatland. The outline of a hero starts with a call to adventure. Meaning the hero gets a special invitation or challenge. In the case of Beowulf it’s when he is called by the Spear-Danes and decides to help them. He heard stories of Grendel’s and attacks and wanted to help them kill him. The second point in this hero’s journey “outline” is assistance. This is when the hero receives advice or aid from a person, the person is usually someone who is older and wiser. This is when Beowulf teams up with the other soldiers in order to attack Grendel. He teams up with them because they know how Grendel works and they are able to offer him advice. The third point is commonly known as departure. When the hero leaves from their “normal” everyday lives and they begin their adventure. This would be when Beowulf and his team of soldiers go on a boat and sail across the sea. They sailed from Geatland all the way to Denmark.

Next in the hero’s journey is the trials, which can be identified as when the hero either solves something like a riddle, kills a monster or successfully escapes from being trapped. This would be when Beowulf boasts, gives his background information and goals, in the Heorot hall. He tries to prove that he indeed can defeat the vicious monster that is Grendel. After the trials comes the approach. In which the hero will be faced with their worst fear. In this case being Beowulf facing Grendel face to face. All Beowulf wants to do is kill Grendel, but it is a very fear filled situation since Grendel is known to be violent and undefeated. After a hero is faced with an approach a crisis will follow. To a hero a crisis is their darkest hour. It is when the hero will suffer and they might even die but will be born again. Beowulf loses a soldier, one of his best friends. After losing the soldier, he is still struggling to wrestle Grendel. Beowulf then goes through the point of a treasure. It is known as when a hero wins or claims some kind of teaser after the crisis. In Beowulf, he rips the arm off of Grendel. Beowulf was able to regain control after he had been struggling to keep up in the fight. Grendel’s arm was considered a treasure amongst the Danes and Beowulf as the celebrated the win. In the hero’s journey cycle now comes the result.

Which can be different between stories. It’s always when we see if “the monsters bow down before the hero, or do they chase him as he flees from the special world.” In this epic it is when Grendel runs back to the swamp, which can also be referred to as marshes or moors. Which is where all monsters and evil like creatures lived. While Grendel is at the swamp the Spear-Danes congratulate and honor Beowulf with treasure. Now comes the return, when the hero goes back to their so called “normal” lifestyle. Hrothgar will now thank Beowulf for the victory against Grendel. Then Beowulf will sail back to Geatland with large amounts of treasure to give to Hygelac. Hygelac was the king of the geats and Beowulf was his confidant. Now comes the new life, when the challenge the hero had interacted in changed them. The hero no longer feels connection and feels that they have outgrown their old life. In Beowulf, he is still remaining to act as Hygelac’s confidant. As he still fights in battles in order to protect the king. Next comes the resolution which is considered to be when everything comes into order. Beowulf now becomes the new king due to Hygelac’s death. Lastly is the new and improved status quo. After you become a hero, everything changes. Beowulf challenges a dragon which is far more dangerous than anything he had ever done.

With his abilities he can beat all. He fears nothing. When battling Grendel, a beast who has been threatening the town in the story, Beowulf battles hand-to-hand. This accomplishment took incredible fearlessness. Beowulf battled numerous incredible fights. Beowulf was a legend since he battled off Grendel and prevented him from murdering any greater amount of Hrothgar’s men. Although Beowulf is a violent and odd old English poem, it’s a classic. He is a heroic character who isn’t afraid to challenge himself, and to risk his life in order to protect his people. Beowulf is a hero.

The Hero's Journey in Beowulf. (2020, Mar 21). Retrieved from https://papersowl.com/examples/the-heros-journey-in-beowulf/