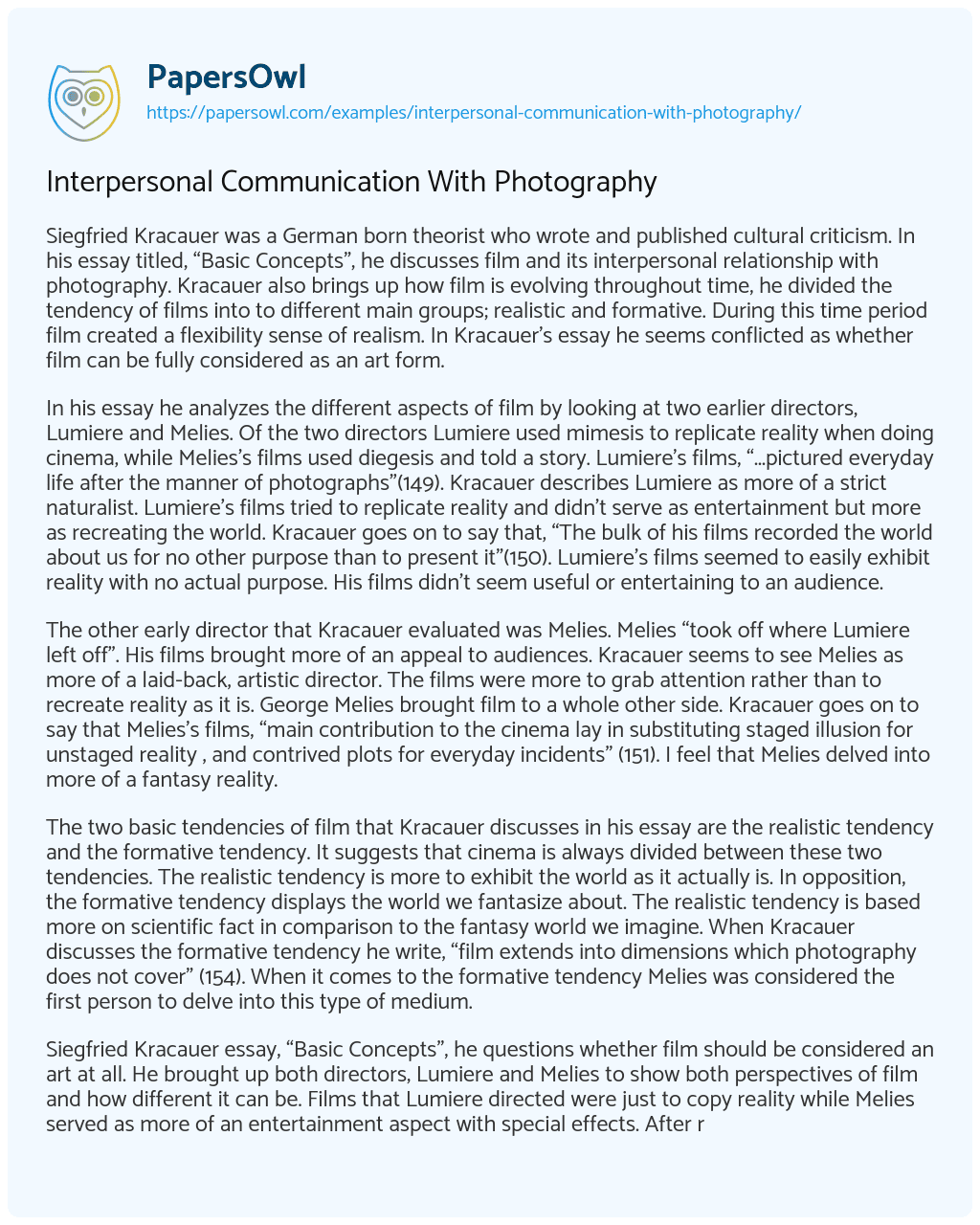 Siegfried Kracauer was a German born theorist who wrote and published cultural criticism. In his essay titled, “Basic Concepts”, he discusses film and its interpersonal relationship with photography. Kracauer also brings up how film is evolving throughout time, he divided the tendency of films into to different main groups; realistic and formative. During this time period film created a flexibility sense of realism. In Kracauer’s essay he seems conflicted as whether film can be fully considered as an art form.

In his essay he analyzes the different aspects of film by looking at two earlier directors, Lumiere and Melies. Of the two directors Lumiere used mimesis to replicate reality when doing cinema, while Melies’s films used diegesis and told a story. Lumiere’s films, “…pictured everyday life after the manner of photographs”(149). Kracauer describes Lumiere as more of a strict naturalist. Lumiere’s films tried to replicate reality and didn’t serve as entertainment but more as recreating the world. Kracauer goes on to say that, “The bulk of his films recorded the world about us for no other purpose than to present it”(150). Lumiere’s films seemed to easily exhibit reality with no actual purpose. His films didn’t seem useful or entertaining to an audience.

The other early director that Kracauer evaluated was Melies. Melies “took off where Lumiere left off”. His films brought more of an appeal to audiences. Kracauer seems to see Melies as more of a laid-back, artistic director. The films were more to grab attention rather than to recreate reality as it is. George Melies brought film to a whole other side. Kracauer goes on to say that Melies’s films, “main contribution to the cinema lay in substituting staged illusion for unstaged reality , and contrived plots for everyday incidents” (151). I feel that Melies delved into more of a fantasy reality.

Siegfried Kracauer essay, “Basic Concepts”, he questions whether film should be considered an art at all. He brought up both directors, Lumiere and Melies to show both perspectives of film and how different it can be. Films that Lumiere directed were just to copy reality while Melies served as more of an entertainment aspect with special effects. After reading and analyzing his essay, I think that Kracauer believes that cinema can assert an artistic accuracy if they frame from the basic properties.

Wal-Mart and the Protection Chance for Interpersonal Communication

Interpersonal Communication is an Essential Piece to a Successful Project