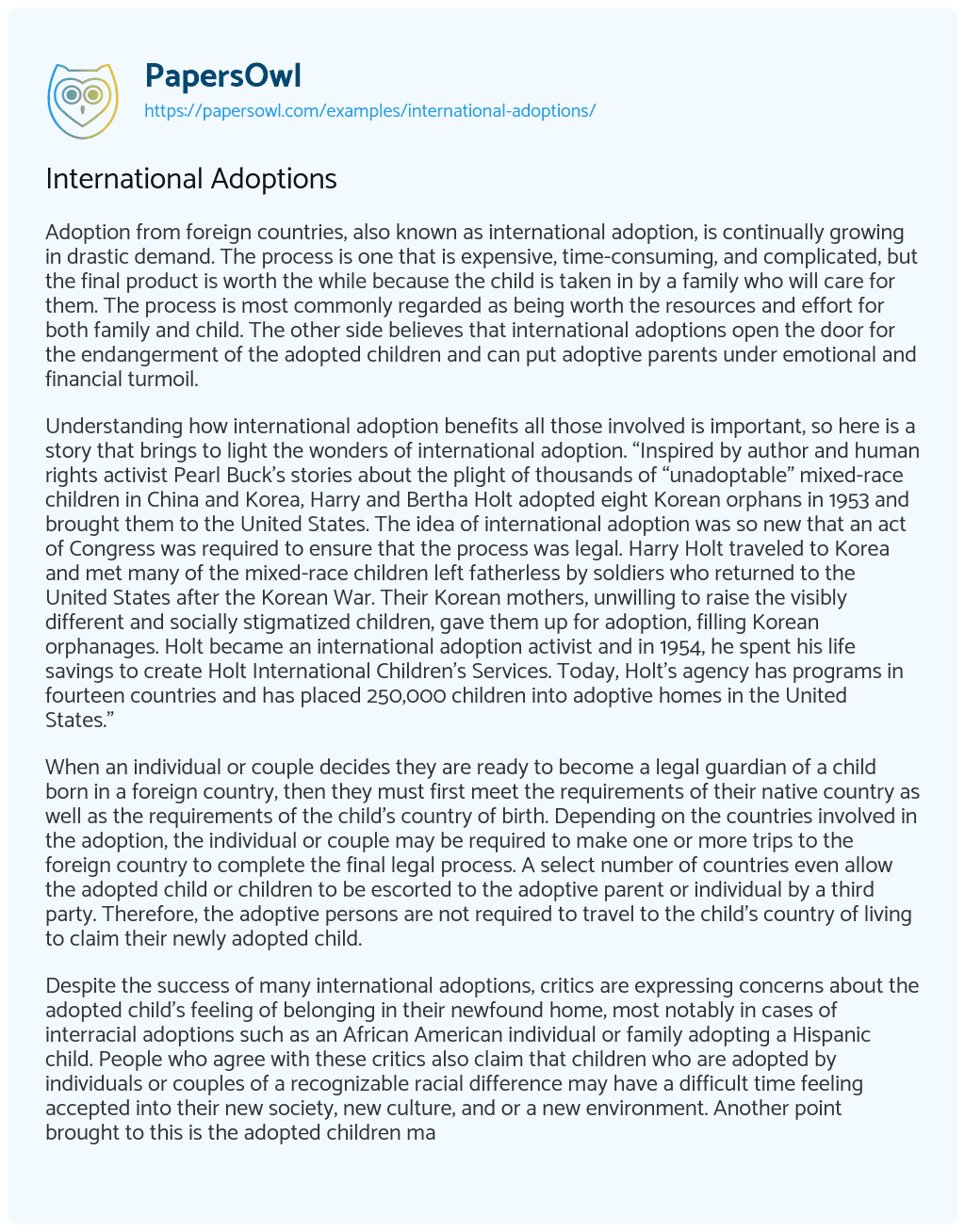 Adoption from foreign countries, also known as international adoption, is continually growing in drastic demand. The process is one that is expensive, time-consuming, and complicated, but the final product is worth the while because the child is taken in by a family who will care for them. The process is most commonly regarded as being worth the resources and effort for both family and child. The other side believes that international adoptions open the door for the endangerment of the adopted children and can put adoptive parents under emotional and financial turmoil.

Understanding how international adoption benefits all those involved is important, so here is a story that brings to light the wonders of international adoption. “Inspired by author and human rights activist Pearl Buck’s stories about the plight of thousands of “unadoptable” mixed-race children in China and Korea, Harry and Bertha Holt adopted eight Korean orphans in 1953 and brought them to the United States. The idea of international adoption was so new that an act of Congress was required to ensure that the process was legal. Harry Holt traveled to Korea and met many of the mixed-race children left fatherless by soldiers who returned to the United States after the Korean War. Their Korean mothers, unwilling to raise the visibly different and socially stigmatized children, gave them up for adoption, filling Korean orphanages. Holt became an international adoption activist and in 1954, he spent his life savings to create Holt International Children’s Services. Today, Holt’s agency has programs in fourteen countries and has placed 250,000 children into adoptive homes in the United States.”

When an individual or couple decides they are ready to become a legal guardian of a child born in a foreign country, then they must first meet the requirements of their native country as well as the requirements of the child’s country of birth. Depending on the countries involved in the adoption, the individual or couple may be required to make one or more trips to the foreign country to complete the final legal process. A select number of countries even allow the adopted child or children to be escorted to the adoptive parent or individual by a third party. Therefore, the adoptive persons are not required to travel to the child’s country of living to claim their newly adopted child.

Despite the success of many international adoptions, critics are expressing concerns about the adopted child’s feeling of belonging in their newfound home, most notably in cases of interracial adoptions such as an African American individual or family adopting a Hispanic child. People who agree with these critics also claim that children who are adopted by individuals or couples of a recognizable racial difference may have a difficult time feeling accepted into their new society, new culture, and or a new environment. Another point brought to this is the adopted children may experience extreme homesickness, loss of cultural identity, and awareness of their country of birth. I believe that international adoption’s opposition is correct in arguing that the system can never provide homes for all the children in need and that we must address the problems of poverty and injustice that result in children being abandoned in large numbers in the poorer countries of the world. International adoptions help adoptive parents and their governments become more aware of the problems of the countries from which international adoptees come by going through the adoption process.

Both sides find common ground in the concern of child trafficking and other forms of possible corruption that can be caused by the exploitation of the adoption system. There have been cases where children are abducted or obtained illegally which are then offered as orphans put up for adoption or sale. The cases that are discovered, in which fraudulent adoptions and illegal activity were discovered, the countries that are involved both begin separate investigations. These investigations of the illegal activity are fully conducted until both sides come to a conclusion, then attempts to prevent the illegal acts are put in place to protect the children and adoptive parents to put a stop to this corruption. One example of these regulations put in place is The Hague Convention on Inter-country Adoption which is made up of around ninety countries that seek to put an end to corruption and exploitation of the adoption system.

In conclusion, controversy exists at the heart of international adoption and makes the progress of this issue hard to define. The world is divided between those who argue that the goal is to open up international adoption to facilitate the placement of children in need of homes, and those who argue that the goal is to close it down to avoid further exploitation of these children, their parents, and their countries. However, focusing on the reality of children’s lives and needs is the common ground both sides agree on along with finding a pathway to create new and reformed policies.