Impact of the Harlem Renaissance 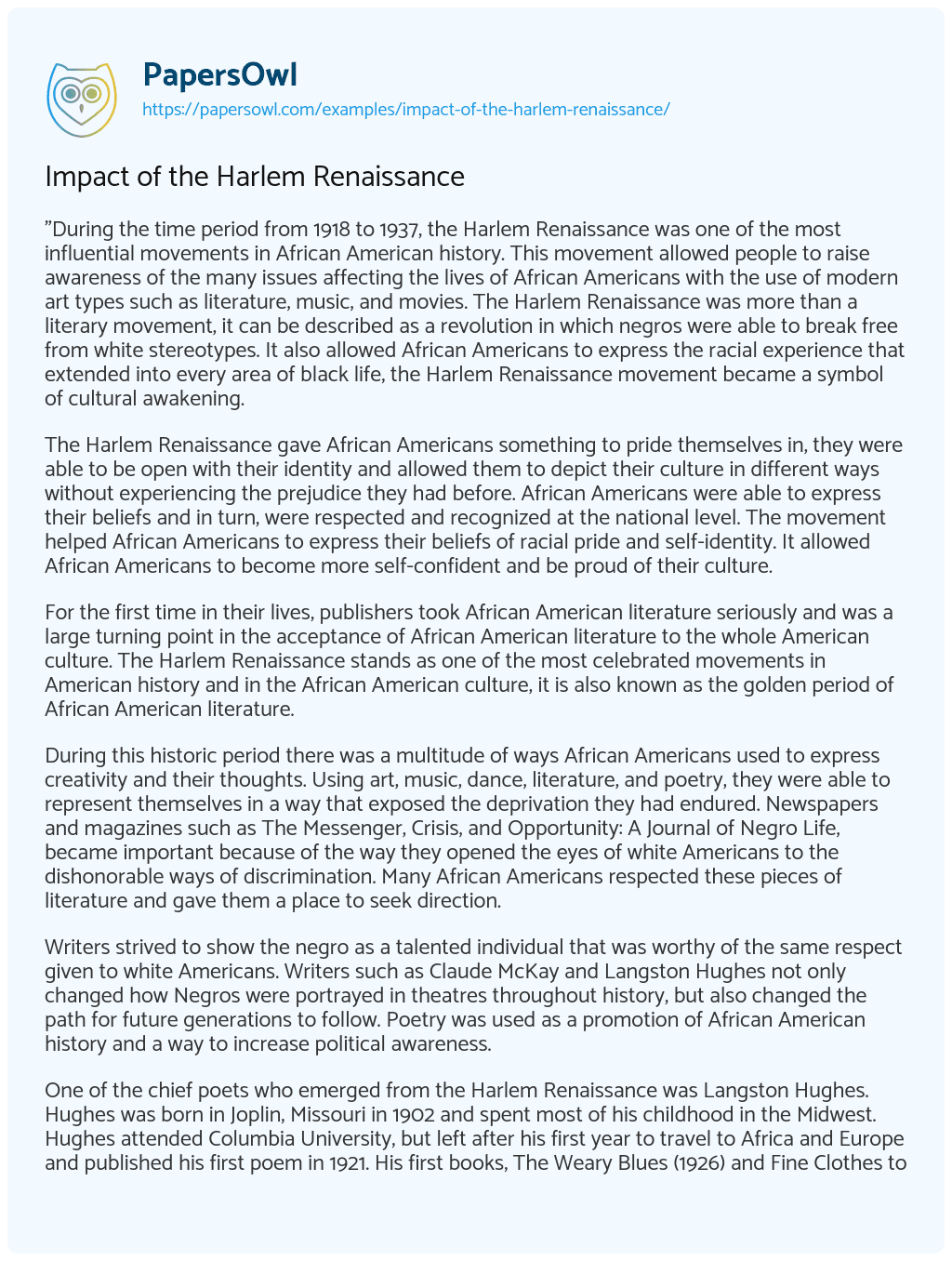 During this historic period there was a multitude of ways African Americans used to express creativity and their thoughts. Using art, music, dance, literature, and poetry, they were able to represent themselves in a way that exposed the deprivation they had endured. Newspapers and magazines such as The Messenger, Crisis, and Opportunity: A Journal of Negro Life, became important because of the way they opened the eyes of white Americans to the dishonorable ways of discrimination. Many African Americans respected these pieces of literature and gave them a place to seek direction.

Writers strived to show the negro as a talented individual that was worthy of the same respect given to white Americans. Writers such as Claude McKay and Langston Hughes not only changed how Negros were portrayed in theatres throughout history, but also changed the path for future generations to follow. Poetry was used as a promotion of African American history and a way to increase political awareness.

One of the chief poets who emerged from the Harlem Renaissance was Langston Hughes. Hughes was born in Joplin, Missouri in 1902 and spent most of his childhood in the Midwest. Hughes attended Columbia University, but left after his first year to travel to Africa and Europe and published his first poem in 1921. His first books, The Weary Blues (1926) and Fine Clothes to the Jew (1927) won poetry prizes and brought him wide admiration. Unlike many of his peers who strived for poetic expression, Hughes explored the validity of the black dialect in urban and rural black lifestyles, his poetry painted a picture of the complications faced by African Americans. Since he lived in a society that was dominated by white men, he used his poetry as a weapon by which he could give an effective expression to cultural and ethnic qualities of his black race so as to shape a society.

Hughes not only contributed poetry, but also to numerous other forms of literature and nonfiction throughout his long career. Hughes wrote proudly and optimistically about the African American conditions.

Hughes was one of the first black Americans to support himself as a professional writer, who produced more than sixty books. He was also one of the first American writers to receive serious critical attention for realistic portrayals of black Americans. Using poetry, Hughes became significant in speaking for the importance of black culture and African American values.

Claude McKay was another influencing poet of the Harlem Renaissance. He was an avid reader who began to write poetry at the age of ten, in which he reflected about the shock he felt about American racism. McKay emerged as the most aggressive voice of the Harlem Renaissance, his poetry gained a long-lasting admiration among African-Americans during the movement and addressed social and political concerns. Langston Hughes and Countee Cullen identified McKay as a chief inspiring force, even though he did not put pen to paper modernly.

Another important poet and novelist, James Weldon Johnson, is credited with bringing a new realism to black literature in his works such as, The Autobiography of an Ex-Coloured Man and God’s Trombones. His studies of black poetry, music, and theatre helped many white American to understand the genuine African American creative spirit. Johnson also led determined civil rights campaigns to remove legal, political, and social obstacles that hindered black achievement. Johnson’s multi-faceted career testifies to his intellectual broadness, self-confidence, and belief that the future held new opportunities for black Americans. The Harlem Renaissance did more than just produce wonderful works of art, it also produced an immense change in the way that white Americans viewed African Americans and their culture.”

Impact of the Harlem Renaissance. (2021, Jun 26). Retrieved from https://papersowl.com/examples/impact-of-the-harlem-renaissance/

What was the Harlem Renaissance?

Artistic Contributions of the Harlem Renaissance

Harlem Renaissance and the Jazz Movement