How is the Crucible an Allegory for Mccarthyism 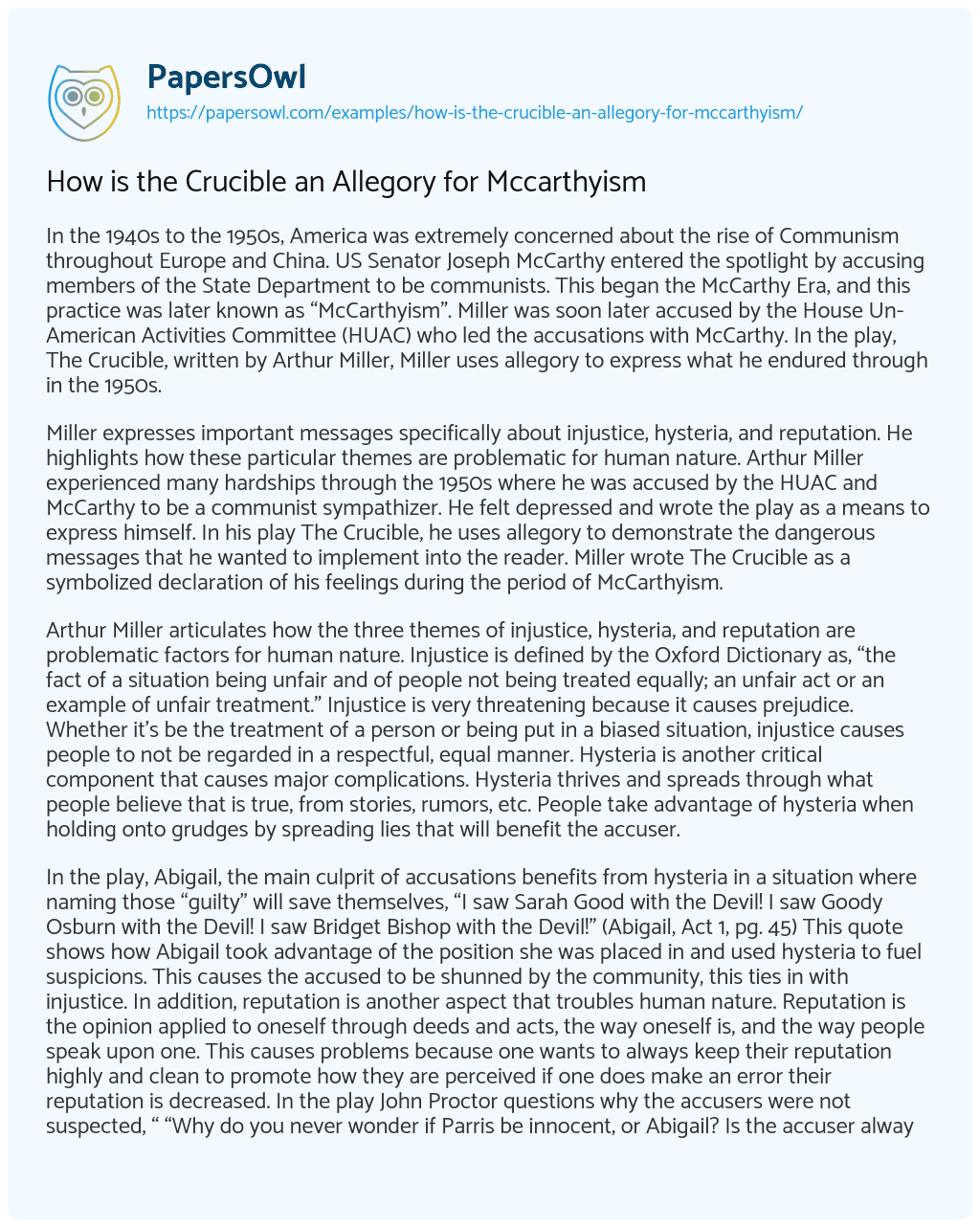 In the 1940s to the 1950s, America was extremely concerned about the rise of Communism throughout Europe and China. US Senator Joseph McCarthy entered the spotlight by accusing members of the State Department to be communists. This began the McCarthy Era, and this practice was later known as “McCarthyism”. Miller was soon later accused by the House Un-American Activities Committee (HUAC) who led the accusations with McCarthy. In the play, The Crucible, written by Arthur Miller, Miller uses allegory to express what he endured through in the 1950s.

Miller expresses important messages specifically about injustice, hysteria, and reputation. He highlights how these particular themes are problematic for human nature. Arthur Miller experienced many hardships through the 1950s where he was accused by the HUAC and McCarthy to be a communist sympathizer. He felt depressed and wrote the play as a means to express himself. In his play The Crucible, he uses allegory to demonstrate the dangerous messages that he wanted to implement into the reader. Miller wrote The Crucible as a symbolized declaration of his feelings during the period of McCarthyism.

Arthur Miller articulates how the three themes of injustice, hysteria, and reputation are problematic factors for human nature. Injustice is defined by the Oxford Dictionary as, “the fact of a situation being unfair and of people not being treated equally; an unfair act or an example of unfair treatment.” Injustice is very threatening because it causes prejudice. Whether it’s be the treatment of a person or being put in a biased situation, injustice causes people to not be regarded in a respectful, equal manner. Hysteria is another critical component that causes major complications. Hysteria thrives and spreads through what people believe that is true, from stories, rumors, etc. People take advantage of hysteria when holding onto grudges by spreading lies that will benefit the accuser.

In the play, Abigail, the main culprit of accusations benefits from hysteria in a situation where naming those “guilty” will save themselves, “I saw Sarah Good with the Devil! I saw Goody Osburn with the Devil! I saw Bridget Bishop with the Devil!” (Abigail, Act 1, pg. 45) This quote shows how Abigail took advantage of the position she was placed in and used hysteria to fuel suspicions. This causes the accused to be shunned by the community, this ties in with injustice. In addition, reputation is another aspect that troubles human nature. Reputation is the opinion applied to oneself through deeds and acts, the way oneself is, and the way people speak upon one. This causes problems because one wants to always keep their reputation highly and clean to promote how they are perceived if one does make an error their reputation is decreased. In the play John Proctor questions why the accusers were not suspected, “ “Why do you never wonder if Parris be innocent, or Abigail? Is the accuser always holy now? Were they born this morning as clean as God’s fingers? I’ll tell you what’s walking Salem – vengeance is walking Salem.

We are what we always were in Salem, but now the little crazy children are jangling the keys of the kingdom, and common vengeance writes the law!” (Proctor, Act 2, pg. 73) This quote elaborates on why the accusers were not suspected, Reverend Parris has a reputation of being a holy man of the church which makes him improbable to witchcraft and Abigail who has kept her reputation “clean” amidst of all the misdeeds she has done. So some people will do anything, by any means, to be reputable, this allows their word to be trusted and “true”. Miller emphasizes these ideas to put a spotlight of their importance and effect on society.

When Miller wrote The Crucible, it was his way of expressing himself and how he felt during the McCarthy Era. The play was similar to real life events that occurred when McCarthy and the HUAC accused Americans as communists. Miller was tried and accused of being a communist sympathizer. At the beginning of the play, “experts” of witchcraft and holiness are brought into question the cause of the girls in the state of comas. Their reputations allow their judgment to be perceived as correct. In order to emphasize Reverend Hale’s credibility, Miller writes, ”He has much experience in all demonic arts…He has indeed; and found a witch in Beverly last year, and let you remember that.” (Act 1, pg. 13) This quote emphasizes how later when he asks questions to the suspects, the testimony they give will be backed by him since he is an “expert”. On the other hand, Abigail uses fear and intimidation to make others back her up, “She’ll kill me for sayin’ that! Abby’ll charge lechery on you, Mr. Proctor!” (Mary Warren, Act 2, pg. 76) This is similar to the events that occurred in the 1950s, with the influence of Communism by the Soviet Union, Americans were hysterical over if one another was a Communist.

Senator McCarthy took advantage by using his status to back up his accusations, “McCarthy used hearsay and intimidation to establish himself as a powerful and feared figure in American politics. He leveled charges of disloyalty at celebrities, intellectuals and anyone who disagreed with his political views, costing many of his victims their reputations and jobs.” (History.com) Miller uses those events to establish a connection between real life and in his play. He witnessed a “trusted” figure to lay accusations on people. Another example written in his work is when Proctor was accused of witchcraft when he told the truth. Proctor tries to save his wife by telling the truth, but he is accused by his wife when his wife lies in order to keep his reputation good, “Proctor: God help me, I lusted…but it is a whore’s vengeance.” Elizabeth is asked if John Proctor committed lechery, “No, sir.” (Act 3, pg 105) These quotes highlight how although both Proctor and Miller told the truths in each of their personal cases, they were still accused and tried. Miller felt a state of depression as he wrote in the New Yorker, “ The Crucible was an act of desperation. Much of my desperation branched out, I suppose, from a typical Depression-era trauma—the blow struck on the mind by the rise of European Fascism and the brutal anti-Semitism it had brought to power.” (Miller)

In the play The Crucible, Miller has used allegory to convey the themes of injustice, hysteria, and honor/reputation. He uses the scenes and characters to represent the real-life occurrences. For example, he secretly compares Abigail and Senator McCarthy together, McCarthy took advantage of the Red Scare to make people believe that people were communists and how Abigail took advantage of the beliefs of witchcraft to accuse people during the Salem Witch Trials. Miller writes, “I want to open myself! I want the light of God, I want the sweet love of Jesus!…I saw Sarah Good with the Devil! I saw Goody Osburn with the Devil! I saw Bridget Bishop with the Devil!” (Abigail, Act 1, pg 45) This quote exemplifies how Abigail just used the townspeople’s beliefs and a backed “expert” of the situation to convince everyone that she was innocent.

Another example of allegory in the play is the lives ruined in the book by the trails are similar to the people whose lives were also ruined due to McCarthyism. In the US, McCarthy has accused 205 state department workers, many artists/actors, and innocent people to be blacklisted and their careers ruined. Miller depicts this in the play as “In 1692 nineteen men and women and two dogs were convicted and hanged for witchcraft…” (Introduction, pg vii) The quote symbolizes how the accused of both events suffered extreme consequences because of mere accusations that were taken too far. In addition to these, Miller depicts himself in his play as well. He writes about a character by the name of John Proctor, a sinned man who sacrifices himself in order to save himself, just like how Miller refused to sell out his friends that were possible communists. Miller writes, “No, I did not…I did not…I speak my own sins; I cannot judge another. I have no tongue for it…I have three children, how may I teach them to walk like men in the world, and I sold my friends?…Because it is my name! Because I cannot have another in my life! Because I lie and sign myself to lies! Because I am not worth the dust on the feet of them that hang! How may I live without my name? I have given you my soul; leave me my name!” (Proctor, Act 4, pg 130-133)

This quote shows how when Proctor was asked to confess and name others to save his life, he confessed himself but refused to accuse others so he could live, his wife understood his noble sacrifice and fulfilled his wish to be an honorable man. Miller, in comparison, does a replication of what Proctor does to save his friends, in the face of losing everything.

To conclude, in the 1940s to the 1950s, the Red Scare prompted US Senator Joseph McCarthy to accuse people to be communists. This began the McCarthy Era, where government workers, artists/actors, and innocent people were accused. Arthur Miller was soon later accused by the McCarthy led HUAC. In the play, The Crucible, written by Arthur Miller, Miller uses allegory to recreate the events occurring in real life. Miller expresses important messages specifically about injustice, hysteria, and reputation and highlights how these particular themes are dangerous. Miller felt the best way to express himself is to write The Crucible. In his play The Crucible, he uses allegory to demonstrate the dangerous messages that he wanted the reader to be aware of. Miller wrote The Crucible as replication of his feelings during the period of McCarthyism in the 1950s.

How is the Crucible an Allegory for Mccarthyism. (2021, Apr 13). Retrieved from https://papersowl.com/examples/how-is-the-crucible-an-allegory-for-mccarthyism/

The Crucible as an Allegory to McCarthyism

The Crucible as an Allegory of the Witch Trial