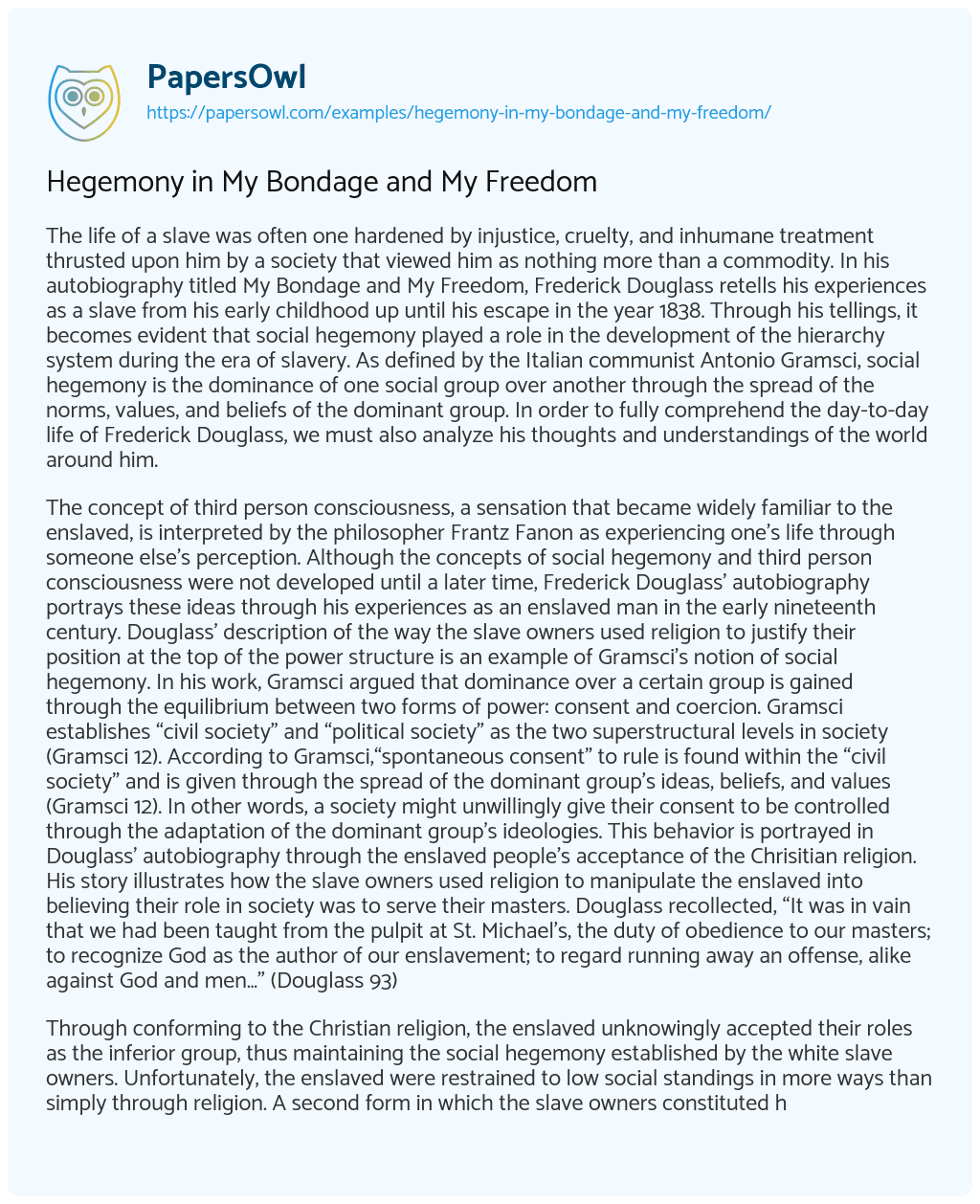 The life of a slave was often one hardened by injustice, cruelty, and inhumane treatment thrusted upon him by a society that viewed him as nothing more than a commodity. In his autobiography titled My Bondage and My Freedom, Frederick Douglass retells his experiences as a slave from his early childhood up until his escape in the year 1838. Through his tellings, it becomes evident that social hegemony played a role in the development of the hierarchy system during the era of slavery. As defined by the Italian communist Antonio Gramsci, social hegemony is the dominance of one social group over another through the spread of the norms, values, and beliefs of the dominant group. In order to fully comprehend the day-to-day life of Frederick Douglass, we must also analyze his thoughts and understandings of the world around him.

The concept of third person consciousness, a sensation that became widely familiar to the enslaved, is interpreted by the philosopher Frantz Fanon as experiencing one’s life through someone else’s perception. Although the concepts of social hegemony and third person consciousness were not developed until a later time, Frederick Douglass’ autobiography portrays these ideas through his experiences as an enslaved man in the early nineteenth century. Douglass’ description of the way the slave owners used religion to justify their position at the top of the power structure is an example of Gramsci’s notion of social hegemony. In his work, Gramsci argued that dominance over a certain group is gained through the equilibrium between two forms of power: consent and coercion. Gramsci establishes “civil society” and “political society” as the two superstructural levels in society (Gramsci 12). According to Gramsci,“spontaneous consent” to rule is found within the “civil society” and is given through the spread of the dominant group’s ideas, beliefs, and values (Gramsci 12). In other words, a society might unwillingly give their consent to be controlled through the adaptation of the dominant group’s ideologies. This behavior is portrayed in Douglass’ autobiography through the enslaved people’s acceptance of the Chrisitian religion. His story illustrates how the slave owners used religion to manipulate the enslaved into believing their role in society was to serve their masters. Douglass recollected, “It was in vain that we had been taught from the pulpit at St. Michael’s, the duty of obedience to our masters; to recognize God as the author of our enslavement; to regard running away an offense, alike against God and men…” (Douglass 93)

Through conforming to the Christian religion, the enslaved unknowingly accepted their roles as the inferior group, thus maintaining the social hegemony established by the white slave owners. Unfortunately, the enslaved were restrained to low social standings in more ways than simply through religion. A second form in which the slave owners constituted hegemony was by preventing their slaves from receiving any kind of formal education. This concept is highlighted in the heated argument between master Hugh and Mrs. Auld when she expresses her desire to teach Douglass how to read. Master Hugh exclaims, “If you teach that nigger—speaking of [Douglass]—how to read the bible, there will be no keeping him” and “as to himself, learning would do him no good, but probably, a great deal of harm—making him disconsolate and unhappy” (Douglass 48). Put simply, Douglass’ master firmly believed that teaching a slave to read was futile and would only lead to his desire to escape. Mr. Auld’s actions are done solely for the purpose of keeping his position as master. This suggests that hegemony is preserved by those in power by leading the subordinate group into believing that the social structure set in place is designed to benefit all, when in reality it only benefits the controlling group. Master Hugh recognized the power that education could give a slave and therefore forbade Douglass from learning how to read. This rejection of the basic right to an education worked to dehumanize Douglass and exemplifies the burdens encountered by a person of color in a world where they were always perceived less than human.

In many instances, Frederick Douglass experienced the sense of third person consciousness caused by racial objectification as described by Frantz Fanon. Fanon’s understanding of third person consciousness is expressed through the contradiction between the white man’s perception of him and his own perception of himself. In the eyes of a white man, a person of color is subjected to objecthood that he can never truly be liberated from because of the color of his skin. On the contrary, a black man would see himself as equal —and just as deserving of inalienable rights— as all other men. Frederick Douglass battles these contradicting perceptions of himself throughout his entire life as a slave. Douglass’ frustration with the way he is perceived by his white society and by himself is emphasized upon his return to Baltimore when he sees Tommy all grown up. As he examines the educated and respectable man that Tommy grew up to become, Douglass reflects on his own position in society and contemplates why he could never grow to be truly free like the boy he once helped care for.

Douglass comes to the conclusion that because of the color of his skin and society’s perception of him, he “could grow, though [he] could not become a man, but must remain, all [his] life, a minor— a mere boy” (Douglass 104). By acknowledging the difference in physical appearance and social standing between him and Tommy, Douglass becomes a victim to the isolating experience of a black man seeing himself from the perspective of a white supremacist society. Third person consciousness destroys the foundation of the idea that subjection is simply between those in power and those who are not, proposing that one can be metaphorically held captive by their own self-awareness. This sense of third person consciousness felt by the enslaved ultimately works to reinforce the hegemonic society created by the dominating white population. As a result of third person consciousness, the black man is not given the opportunity to create his own image for himself because he is subject to the images that are determined in advance for him due to the color of his skin. Fanon expressed how the white person’s perception of him burdened him with feeling “responsible at the same time for [his] body, for [his] race, and for [his] ancestors” (Fanon 3).

Upon viewing himself through the same stereotypes inflicted on him, Fanon gave into the social structure that was set by the white ruling class. He surrenders to his own dehumanization and states, “On that day, completely dislocated, unable to be abroad with the other, the white man, who unmercifully imprisoned me, I took myself far off from my own presence, far indeed, and made myself an object” (Fanon 3). By submitting to the effects of third person consciousness, the enslaved accept their low social ranking and give their consent to be ruled over. This was the case for most of the slaves encountered by Douglass during his period of enslavement. Douglass, on the other hand, refused to conform to his society’s expectations of him by pursuing his desire to learn how to read and write. Through literacy, Douglass liberated himself from the enslavement of third person consciousness and hegemony. Frederick Douglass’ autobiography titled My Bondage and My Freedom illustrates the ideas of hegemony and third person consciousness through the detailed retelling of his experiences living as a slave in the south.

In his description of the the slave owners’ efforts to Christianize their slaves, Douglass provides an example of Antonio Gramsci’s theory of social hegemony and how dominant groups in society often use their ideologies to gain “spontaneous consent” to rule. Douglass’ story also depicts how slave owners maintained hegemony by strictly prohibiting the slaves from receiving an education. Like many other slaves, Douglass experienced a sense of third person consciousness, an idea developed by Frantz Fanon defined as the viewing of oneself through another person’s perspective, that made him question his being and position as a black man. Douglass’ story also depicts the manner in which third person consciousness often worked to solidify the hegemonic society created by white slave owners. Douglass’ unique perspective on the life of a slave acts to develop our understanding of the complexity of his character and the world he was living in during the period of slavery in the United States.

Hegemony in My Bondage and My Freedom. (2022, Feb 09). Retrieved from https://papersowl.com/examples/hegemony-in-my-bondage-and-my-freedom/

Dehumanization in the Narrative