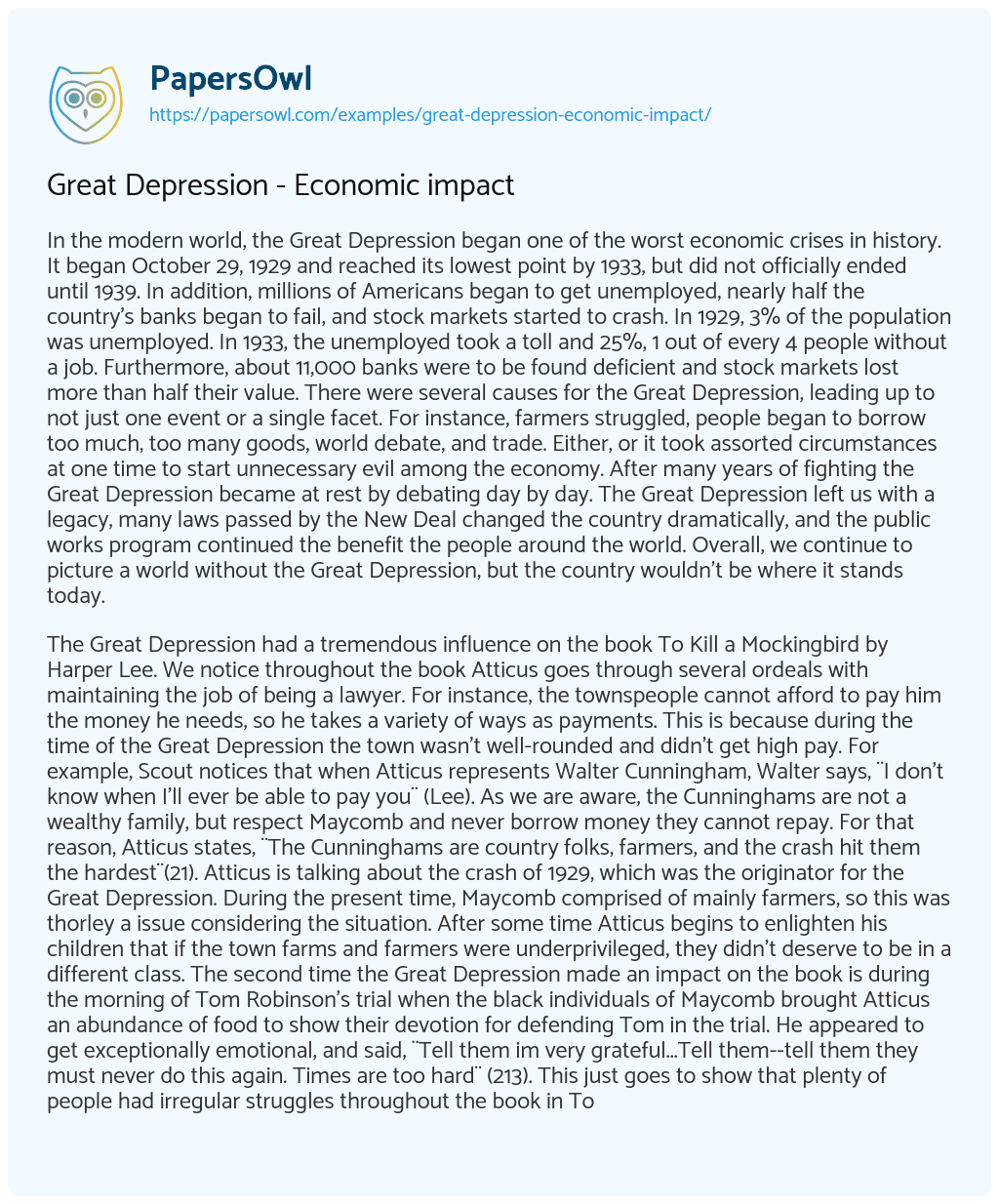 In the modern world, the Great Depression began one of the worst economic crises in history. It began October 29, 1929 and reached its lowest point by 1933, but did not officially ended until 1939. In addition, millions of Americans began to get unemployed, nearly half the country’s banks began to fail, and stock markets started to crash. In 1929, 3% of the population was unemployed. In 1933, the unemployed took a toll and 25%, 1 out of every 4 people without a job. Furthermore, about 11,000 banks were to be found deficient and stock markets lost more than half their value. There were several causes for the Great Depression, leading up to not just one event or a single facet. For instance, farmers struggled, people began to borrow too much, too many goods, world debate, and trade. Either, or it took assorted circumstances at one time to start unnecessary evil among the economy. After many years of fighting the Great Depression became at rest by debating day by day. The Great Depression left us with a legacy, many laws passed by the New Deal changed the country dramatically, and the public works program continued the benefit the people around the world. Overall, we continue to picture a world without the Great Depression, but the country wouldn’t be where it stands today.

The Great Depression had a tremendous influence on the book To Kill a Mockingbird by Harper Lee. We notice throughout the book Atticus goes through several ordeals with maintaining the job of being a lawyer. For instance, the townspeople cannot afford to pay him the money he needs, so he takes a variety of ways as payments. This is because during the time of the Great Depression the town wasn’t well-rounded and didn’t get high pay. For example, Scout notices that when Atticus represents Walter Cunningham, Walter says, ¨I don’t know when I’ll ever be able to pay you¨ (Lee). As we are aware, the Cunninghams are not a wealthy family, but respect Maycomb and never borrow money they cannot repay. For that reason, Atticus states, ¨The Cunninghams are country folks, farmers, and the crash hit them the hardest¨(21). Atticus is talking about the crash of 1929, which was the originator for the Great Depression. During the present time, Maycomb comprised of mainly farmers, so this was thorley a issue considering the situation. After some time Atticus begins to enlighten his children that if the town farms and farmers were underprivileged, they didn’t deserve to be in a different class. The second time the Great Depression made an impact on the book is during the morning of Tom Robinson’s trial when the black individuals of Maycomb brought Atticus an abundance of food to show their devotion for defending Tom in the trial. He appeared to get exceptionally emotional, and said, ¨Tell them im very grateful…Tell them–tell them they must never do this again. Times are too hard¨ (213). This just goes to show that plenty of people had irregular struggles throughout the book in To Kill a Mockingbird as well the Great Depression.

This topic is still relevant today because issues similar to these have shaped the world into smaller pieces. For example, everyone learned the tough and simple hardships to live, all leading up too all different outcomes. Looking back in history, many aspects of life changed and stayed the same, a good deal of the concepts are still suitable today, and things are still recognized as they were during the Great Depression. Moreover, people are still left homeless and hungry, some children are still unable to go to school, and families around the country have issues with money. Also, there were many changes that were made for the better. Laws are beginning to get more superior, leading to several beneficial economic changes. Mistakes are continuing to be well built, dynamic, and well organized. Last but not least, the Great Depression has made a monumental contact with the world and continues to inspire individuals to make a better difference to this day, considering things were not engaging long-ago.

Economic Recovery in the Great Depression

Unemployment during the Great Depression