Globalization and its Impact on Popular Culture 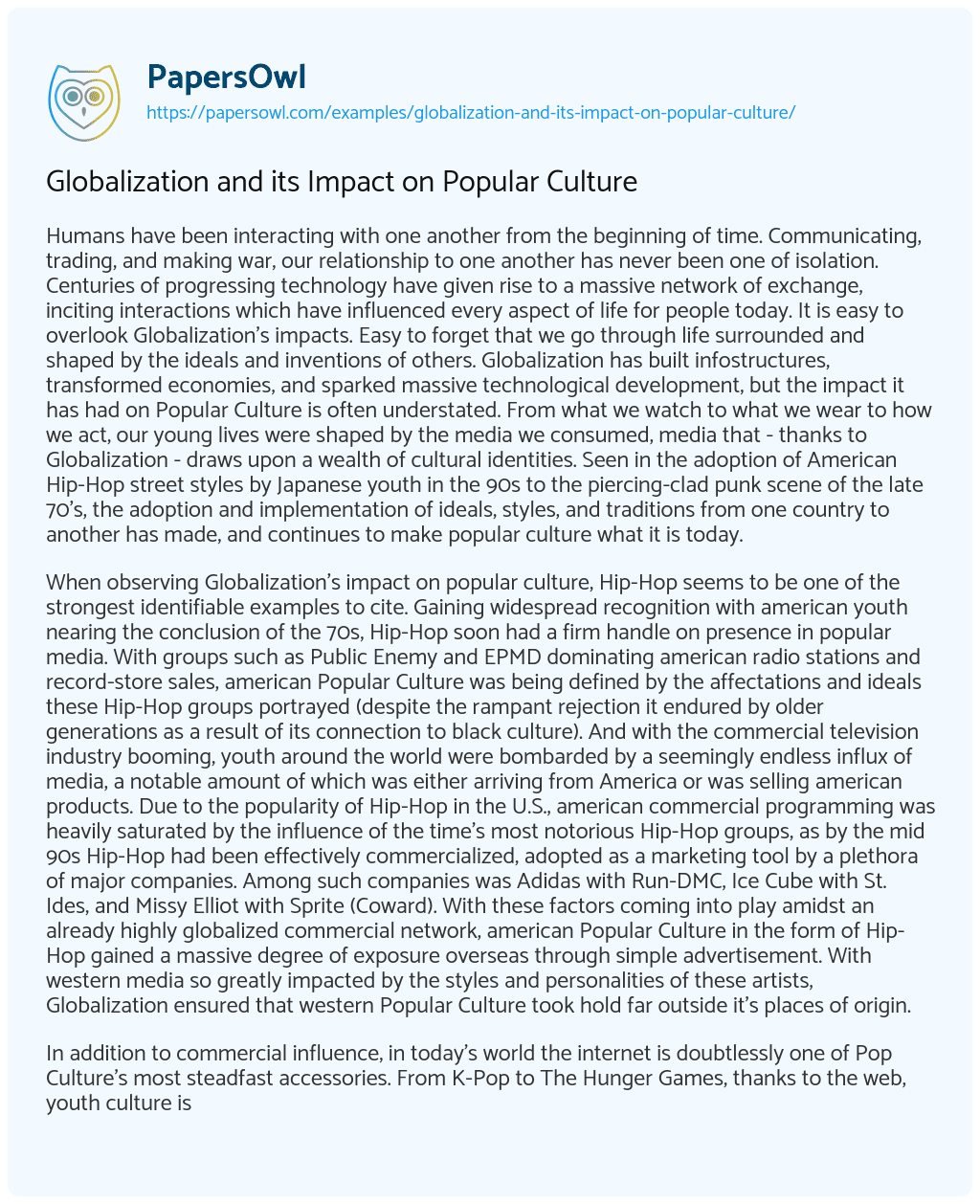 Humans have been interacting with one another from the beginning of time. Communicating, trading, and making war, our relationship to one another has never been one of isolation. Centuries of progressing technology have given rise to a massive network of exchange, inciting interactions which have influenced every aspect of life for people today. It is easy to overlook Globalization’s impacts. Easy to forget that we go through life surrounded and shaped by the ideals and inventions of others. Globalization has built infostructures, transformed economies, and sparked massive technological development, but the impact it has had on Popular Culture is often understated. From what we watch to what we wear to how we act, our young lives were shaped by the media we consumed, media that – thanks to Globalization – draws upon a wealth of cultural identities. Seen in the adoption of American Hip-Hop street styles by Japanese youth in the 90s to the piercing-clad punk scene of the late 70’s, the adoption and implementation of ideals, styles, and traditions from one country to another has made, and continues to make popular culture what it is today.

When observing Globalization’s impact on popular culture, Hip-Hop seems to be one of the strongest identifiable examples to cite. Gaining widespread recognition with american youth nearing the conclusion of the 70s, Hip-Hop soon had a firm handle on presence in popular media. With groups such as Public Enemy and EPMD dominating american radio stations and record-store sales, american Popular Culture was being defined by the affectations and ideals these Hip-Hop groups portrayed (despite the rampant rejection it endured by older generations as a result of its connection to black culture). And with the commercial television industry booming, youth around the world were bombarded by a seemingly endless influx of media, a notable amount of which was either arriving from America or was selling american products. Due to the popularity of Hip-Hop in the U.S., american commercial programming was heavily saturated by the influence of the time’s most notorious Hip-Hop groups, as by the mid 90s Hip-Hop had been effectively commercialized, adopted as a marketing tool by a plethora of major companies. Among such companies was Adidas with Run-DMC, Ice Cube with St. Ides, and Missy Elliot with Sprite (Coward). With these factors coming into play amidst an already highly globalized commercial network, american Popular Culture in the form of Hip-Hop gained a massive degree of exposure overseas through simple advertisement. With western media so greatly impacted by the styles and personalities of these artists, Globalization ensured that western Popular Culture took hold far outside it’s places of origin.

In addition to commercial influence, in today’s world the internet is doubtlessly one of Pop Culture’s most steadfast accessories. From K-Pop to The Hunger Games, thanks to the web, youth culture is more connected than ever before. The internet is by nature a global enterprise, relying upon communication and connection between people above all else, and fostering the development of these interactions. With the speed and convenience of the internet at hand, trends exploded quickly and furiously, set off by the documentation of popular icons. In the mid 90s, at the height of Hip-Hop’s popularity, well-known american Rap musicians began touring outside of the U.S. far more frequently than in previous years, generating impressive amounts of press and commentary via the internet. Emulation of public figures is a long documented phenomenon, and Rap icons were no exception. Once Hip-Hop had broken away from its place of origin, it accumulated a following overseas with the same fervor it had in America. European musicians who had been introduced to american Rap began to gain recognition for their expansion of the genre, and as Rap music became synonymous with youth culture, its entire subgenre followed suit, configuring a completely new image of Popular Culture at the time, and supporting the notion that Globalization in the form of the internet is doubtlessly the most formidable and direct mean by which Popular Culture is influenced.

Globalization in the form of rapidly developing transportation systems also had an integral part to play in the transformation of Popular Culture. The last half of the 20th century witnessed massive amounts of cross-cultural interaction through travel as airfare became less of a novelty and more of a possibility to people of the middle class. This greatly increased the rate of physical interaction between people as geographically divided as say, Americans and Japanese, resulting in substantial degree of cultural exchange. Immigration had a similar impact as well. In the case of America especially, the high volume of immigrating peoples finding residence in the U.S. provided incredible access and exposure to different cultural identities and traditions, and fostered exchange that went two ways as immigrants continued close contact with relatives in their home countries. The Philippines, for example, are credited with being one of the first Asian countries to experience a documented Hip-Hop music scene (occurring sometime around the late 80s), almost entirely due to the large number of filipino communities that had formed in areas such as California, and who saw to the export of many aspects of american Popular Culture back to the Philippines. Thus Hip-Hop was readily adopted by filipino youth, who began producing music of their own that drew influence from the american artists they had heard, and emulating the fashion trends unique to the Hip-Hop performers of the time.

Hip-Hop is only one of the immeasurable number trends to have shaped Popular Culture by way of Globalization. Today’s popular icons are a product of years of interaction through transportation, the web, and our ever-thriving commercial economy. To deny the fact that Popular Culture has been shaped by global-connectedness in every sense is to deny the contributions and importance shared culture has on everyday life. Adoptions and assimilation through interaction are unstoppable processes, and Globalization has allowed for them to thrive. In fewer words, Globalization allows for immense cultural development, and the influence it has had over Popular Culture is inarguably immeasurable.

Globalization and its Impact on Popular Culture. (2021, Mar 16). Retrieved from https://papersowl.com/examples/globalization-and-its-impact-on-popular-culture/

The Impact of BTS on Globalization

The Impact of Globalization on Indigenous Peoples

The Impact of Globalization in Italy

Impact of Great Depression on American History and Culture