Global Capitalism during the Enlightenment 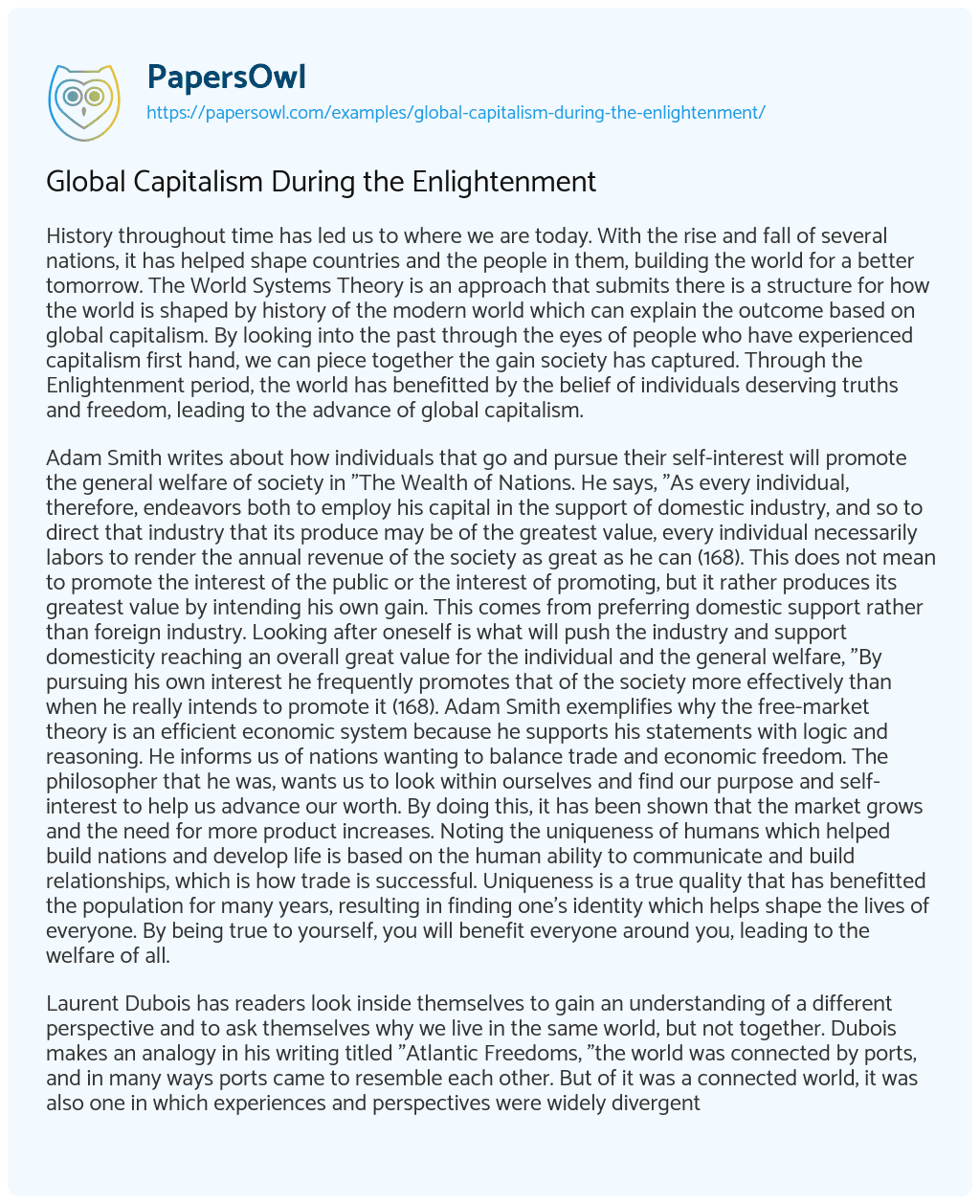 History throughout time has led us to where we are today. With the rise and fall of several nations, it has helped shape countries and the people in them, building the world for a better tomorrow. The World Systems Theory is an approach that submits there is a structure for how the world is shaped by history of the modern world which can explain the outcome based on global capitalism. By looking into the past through the eyes of people who have experienced capitalism first hand, we can piece together the gain society has captured. Through the Enlightenment period, the world has benefitted by the belief of individuals deserving truths and freedom, leading to the advance of global capitalism.

Adam Smith writes about how individuals that go and pursue their self-interest will promote the general welfare of society in “The Wealth of Nations. He says, “As every individual, therefore, endeavors both to employ his capital in the support of domestic industry, and so to direct that industry that its produce may be of the greatest value, every individual necessarily labors to render the annual revenue of the society as great as he can (168). This does not mean to promote the interest of the public or the interest of promoting, but it rather produces its greatest value by intending his own gain. This comes from preferring domestic support rather than foreign industry. Looking after oneself is what will push the industry and support domesticity reaching an overall great value for the individual and the general welfare, “By pursuing his own interest he frequently promotes that of the society more effectively than when he really intends to promote it (168). Adam Smith exemplifies why the free-market theory is an efficient economic system because he supports his statements with logic and reasoning. He informs us of nations wanting to balance trade and economic freedom. The philosopher that he was, wants us to look within ourselves and find our purpose and self-interest to help us advance our worth. By doing this, it has been shown that the market grows and the need for more product increases. Noting the uniqueness of humans which helped build nations and develop life is based on the human ability to communicate and build relationships, which is how trade is successful. Uniqueness is a true quality that has benefitted the population for many years, resulting in finding one’s identity which helps shape the lives of everyone. By being true to yourself, you will benefit everyone around you, leading to the welfare of all.

Laurent Dubois has readers look inside themselves to gain an understanding of a different perspective and to ask themselves why we live in the same world, but not together. Dubois makes an analogy in his writing titled “Atlantic Freedoms, “the world was connected by ports, and in many ways ports came to resemble each other. But of it was a connected world, it was also one in which experiences and perspectives were widely divergent (2), and it helps us capture just how different we are from one another. He brings up a great point because as Adam Smith write how unique we are; we can learn from each other based on where we come from. Dubois says that the view from the boat and from the shore can tell two different stories, and the two perspectives involve different questions. Not being a support of the slave trade in any aspect, it does provide a wealth of knowledge and empowerment leading to great movements, “Enslaved people who were considered chattel rather than human being successfully insisted that they have the right to be free and, secondly, that they had the right to govern themselves according to a new set of principles (5). The Haitian Revolution and those who participated drove the fundamentals of the Enlightenment into action by utilizing self-evidence saying no human deserves to be a slave. This movement came at no better time as it was at the peak of the world’s economic system which turned “the most profitable colony in the world into an independent nation founded on the refusal of the system of slavery that dominated all the societies that surrounded it in the Americas (5). The story of the Haitian Revolution is empowering and gives the human population an idea of how freedom can change the thinking of the world, and have it be so powerful that is can shape a nation. This reading gives us a glimpse into a time where people had cultural and intellectual freedoms. They transformed their lives because they knew their self-worth and wanted to make a change not just for them, but for people who would be put in their same situation. The Haitian Revolution reminds us of human rights, and fear should never hide the rights and freedoms of humans.

No matter who you are, you have rights, and those rights cannot go unrecognized. In the “Declaration of the Rights of Man and of the Citizen, the national assembly of France declared that man has inalienable rights and they are to be respected and obtained permanently, so that this declaration, continually offered to all members of society, may forever recall them to their rights and duties; so that the demands of the citizens, from now on based on straightforward and incontestable principles, will revolve around the happiness of everyone (176). There are 17 laws and all of them pertain to all citizens of France. These rights are based on the outlines and principles of the Enlightenment and represent the original goals of the French Revolution. As there are multiple rights listed in this document, they are all tied together with one commonality: a social and political change. The very first right given is that, “Men are born and remain free and equal in rights (176). This right gives them individual freedoms, equality, and liberty that all citizens look for. The entire document establishes liberty and reason bringing out the principles of the Enlightenment, that reason should be at the forefront of human life. Every right that is written in this document is to benefit the individual and are fundamental to their well-being. This document gives influence of natural rights, and sets individual rights which are defined universally. This shows individualism and the separation of powers, as well as showing influence from the United States’ “Declaration of Independence. The “Declaration of the Rights of Man and of the Citizen gives citizens freedom and truth with themselves and their government.

The Enlightenment period had a great effect on the lives of many throughout the world’s history. From individuals, to nations, to slavery, many people were greatly helped with how the Enlightenment made an impact on global capitalism. Learning how self-realization can impact the greater good is an easy way to impact the world. Freedom of any kind took courage and strength, and the outcome it has given people, especially those who were enslaved, speaks volumes for how much passion engulfs people when they want to change the world. The Enlightenment made such an impact on the world and has shaped society to what it is today; where freedom, truths, and rights are given to citizens to let them live a deserving life. Global capitalism grew due to the strength of many people believing that anything is possible.

Global Capitalism During the Enlightenment. (2019, May 10). Retrieved from https://papersowl.com/examples/global-capitalism-during-the-enlightenment/

The Enlightenment Era in Europe

What should you Know about Enlightenment

How the Age of Enlightenment Changed France and the United States

The Effect of the Enlightenment on the World Today