Friday Night i Met my Hero 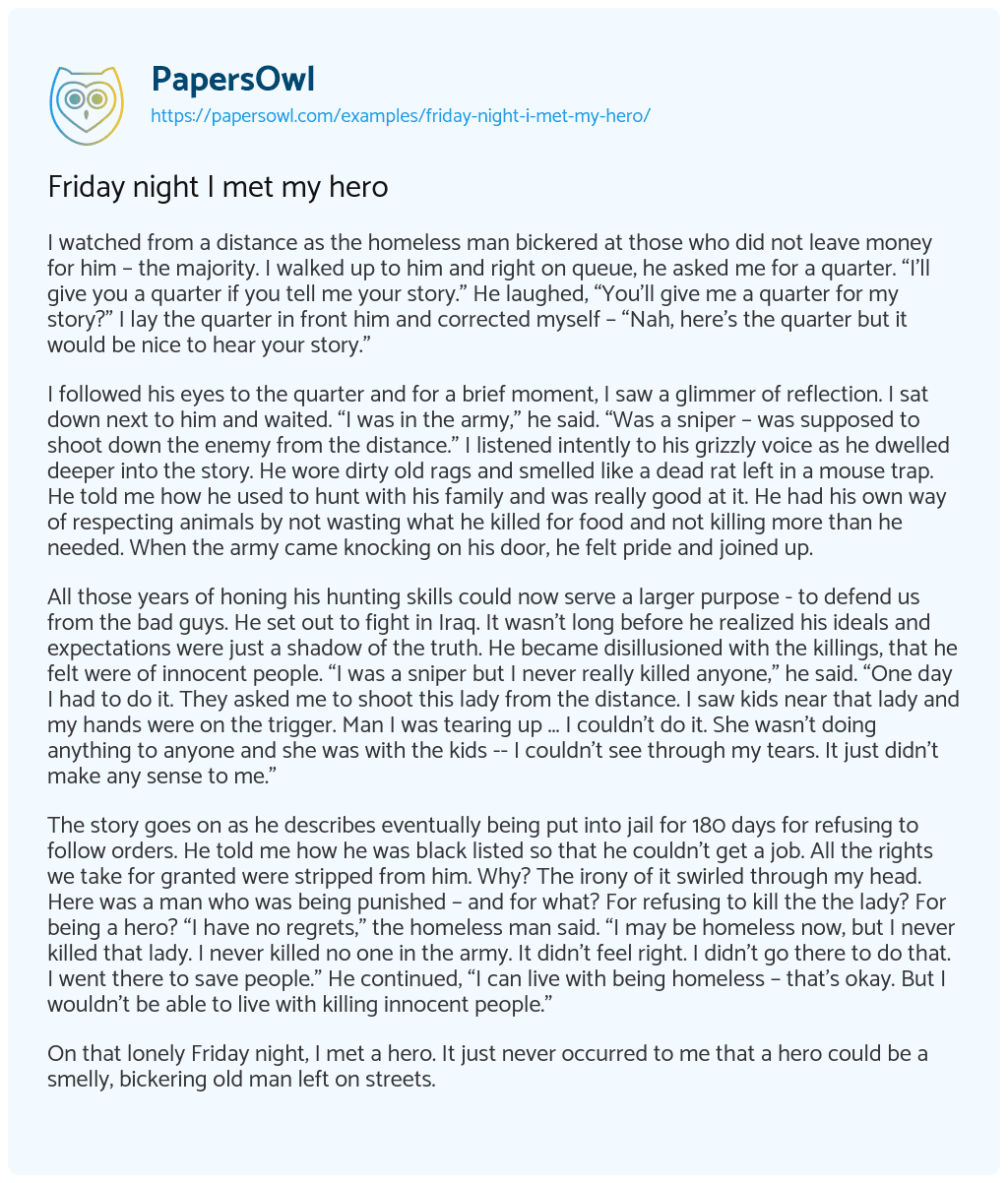 I watched from a distance as the homeless man bickered at those who did not leave money for him – the majority. I walked up to him and right on queue, he asked me for a quarter. “I’ll give you a quarter if you tell me your story.” He laughed, “You’ll give me a quarter for my story?” I lay the quarter in front him and corrected myself – “Nah, here’s the quarter but it would be nice to hear your story.”

I followed his eyes to the quarter and for a brief moment, I saw a glimmer of reflection. I sat down next to him and waited. “I was in the army,” he said. “Was a sniper – was supposed to shoot down the enemy from the distance.” I listened intently to his grizzly voice as he dwelled deeper into the story. He wore dirty old rags and smelled like a dead rat left in a mouse trap. He told me how he used to hunt with his family and was really good at it. He had his own way of respecting animals by not wasting what he killed for food and not killing more than he needed. When the army came knocking on his door, he felt pride and joined up.

All those years of honing his hunting skills could now serve a larger purpose – to defend us from the bad guys. He set out to fight in Iraq. It wasn’t long before he realized his ideals and expectations were just a shadow of the truth. He became disillusioned with the killings, that he felt were of innocent people. “I was a sniper but I never really killed anyone,” he said. “One day I had to do it. They asked me to shoot this lady from the distance. I saw kids near that lady and my hands were on the trigger. Man I was tearing up … I couldn’t do it. She wasn’t doing anything to anyone and she was with the kids — I couldn’t see through my tears. It just didn’t make any sense to me.”

The story goes on as he describes eventually being put into jail for 180 days for refusing to follow orders. He told me how he was black listed so that he couldn’t get a job. All the rights we take for granted were stripped from him. Why? The irony of it swirled through my head. Here was a man who was being punished – and for what? For refusing to kill the the lady? For being a hero? “I have no regrets,” the homeless man said. “I may be homeless now, but I never killed that lady. I never killed no one in the army. It didn’t feel right. I didn’t go there to do that. I went there to save people.” He continued, “I can live with being homeless – that’s okay. But I wouldn’t be able to live with killing innocent people.”

On that lonely Friday night, I met a hero. It just never occurred to me that a hero could be a smelly, bickering old man left on streets.

Friday night I met my hero. (2021, Oct 19). Retrieved from https://papersowl.com/examples/friday-night-i-met-my-hero/

My Father is my Hero

My Mom is my Hero