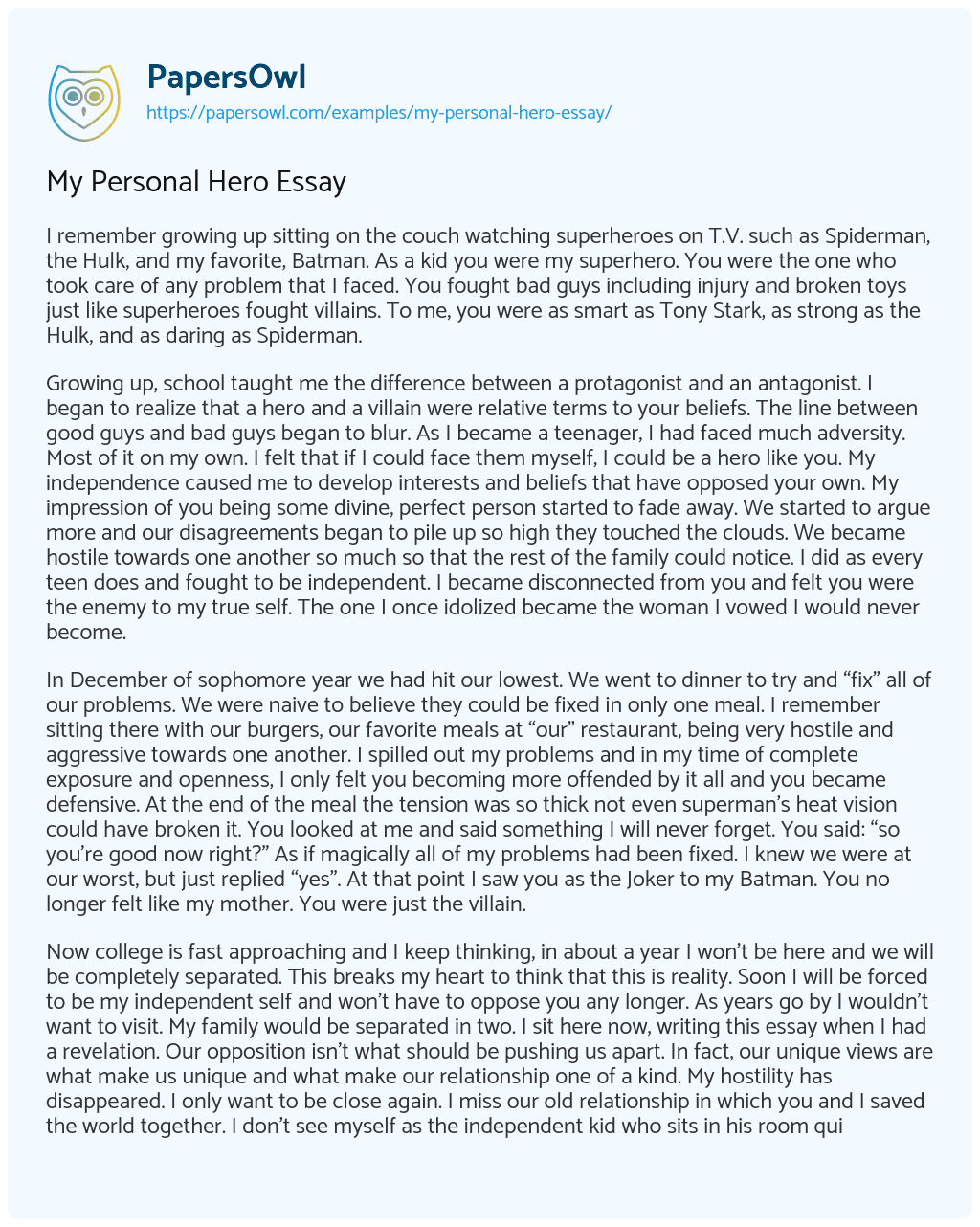 I remember growing up sitting on the couch watching superheroes on T.V. such as Spiderman, the Hulk, and my favorite, Batman. As a kid you were my superhero. You were the one who took care of any problem that I faced. You fought bad guys including injury and broken toys just like superheroes fought villains. To me, you were as smart as Tony Stark, as strong as the Hulk, and as daring as Spiderman.

Growing up, school taught me the difference between a protagonist and an antagonist. I began to realize that a hero and a villain were relative terms to your beliefs. The line between good guys and bad guys began to blur. As I became a teenager, I had faced much adversity. Most of it on my own. I felt that if I could face them myself, I could be a hero like you. My independence caused me to develop interests and beliefs that have opposed your own. My impression of you being some divine, perfect person started to fade away. We started to argue more and our disagreements began to pile up so high they touched the clouds. We became hostile towards one another so much so that the rest of the family could notice. I did as every teen does and fought to be independent. I became disconnected from you and felt you were the enemy to my true self. The one I once idolized became the woman I vowed I would never become.

In December of sophomore year we had hit our lowest. We went to dinner to try and “fix” all of our problems. We were naive to believe they could be fixed in only one meal. I remember sitting there with our burgers, our favorite meals at “our” restaurant, being very hostile and aggressive towards one another. I spilled out my problems and in my time of complete exposure and openness, I only felt you becoming more offended by it all and you became defensive. At the end of the meal the tension was so thick not even superman’s heat vision could have broken it. You looked at me and said something I will never forget. You said: “so you’re good now right?” As if magically all of my problems had been fixed. I knew we were at our worst, but just replied “yes”. At that point I saw you as the Joker to my Batman. You no longer felt like my mother. You were just the villain.

Now college is fast approaching and I keep thinking, in about a year I won’t be here and we will be completely separated. This breaks my heart to think that this is reality. Soon I will be forced to be my independent self and won’t have to oppose you any longer. As years go by I wouldn’t want to visit. My family would be separated in two. I sit here now, writing this essay when I had a revelation. Our opposition isn’t what should be pushing us apart. In fact, our unique views are what make us unique and what make our relationship one of a kind. My hostility has disappeared. I only want to be close again. I miss our old relationship in which you and I saved the world together. I don’t see myself as the independent kid who sits in his room quietly doing homework. I see myself as the little kid getting ready to start a new journey. A journey that I am ready to tackle no matter how hard it may be because I know that at home my sidekick is always supporting me. My pajamas and hero costumes have turned into a graduation gown. My cartoons and comics have turned into textbooks and essays. With everything that’s changing, one thing remain

Friday Night i Met my Hero

Is Odysseus a Hero: Essay on the Main Character of Homer’s Epic Poem