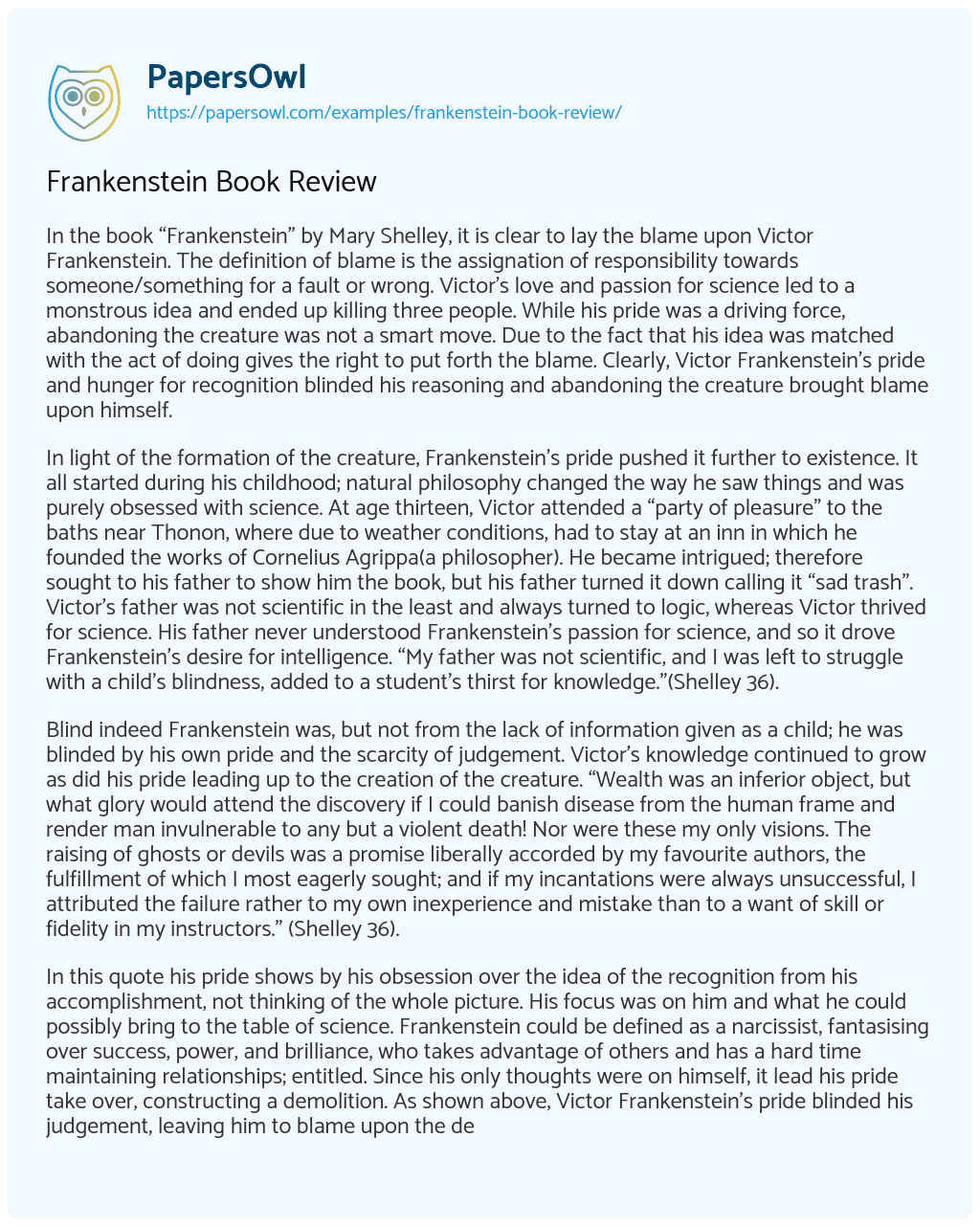 In the book “Frankenstein” by Mary Shelley, it is clear to lay the blame upon Victor Frankenstein. The definition of blame is the assignation of responsibility towards someone/something for a fault or wrong. Victor’s love and passion for science led to a monstrous idea and ended up killing three people. While his pride was a driving force, abandoning the creature was not a smart move. Due to the fact that his idea was matched with the act of doing gives the right to put forth the blame. Clearly, Victor Frankenstein’s pride and hunger for recognition blinded his reasoning and abandoning the creature brought blame upon himself.

In light of the formation of the creature, Frankenstein’s pride pushed it further to existence. It all started during his childhood; natural philosophy changed the way he saw things and was purely obsessed with science. At age thirteen, Victor attended a “party of pleasure” to the baths near Thonon, where due to weather conditions, had to stay at an inn in which he founded the works of Cornelius Agrippa(a philosopher). He became intrigued; therefore sought to his father to show him the book, but his father turned it down calling it “sad trash”. Victor’s father was not scientific in the least and always turned to logic, whereas Victor thrived for science. His father never understood Frankenstein’s passion for science, and so it drove Frankenstein’s desire for intelligence. “My father was not scientific, and I was left to struggle with a child’s blindness, added to a student’s thirst for knowledge.”(Shelley 36).

Blind indeed Frankenstein was, but not from the lack of information given as a child; he was blinded by his own pride and the scarcity of judgement. Victor’s knowledge continued to grow as did his pride leading up to the creation of the creature. “Wealth was an inferior object, but what glory would attend the discovery if I could banish disease from the human frame and render man invulnerable to any but a violent death! Nor were these my only visions. The raising of ghosts or devils was a promise liberally accorded by my favourite authors, the fulfillment of which I most eagerly sought; and if my incantations were always unsuccessful, I attributed the failure rather to my own inexperience and mistake than to a want of skill or fidelity in my instructors.” (Shelley 36).

In this quote his pride shows by his obsession over the idea of the recognition from his accomplishment, not thinking of the whole picture. His focus was on him and what he could possibly bring to the table of science. Frankenstein could be defined as a narcissist, fantasising over success, power, and brilliance, who takes advantage of others and has a hard time maintaining relationships; entitled. Since his only thoughts were on himself, it lead his pride take over, constructing a demolition. As shown above, Victor Frankenstein’s pride blinded his judgement, leaving him to blame upon the destruction.

Finally, his abandonment of the creature left it to live in fear and confusion, causing it to harm others. After fulfilling his goal (creating the creature), he was amazed by his creation at first, but when he observed all the details of its appearance he was disgusted and relentful. “I had desired it with an ardour that far exceeded moderation; but now that I had finished, the beauty of the dream vanished, and breathless horror and disgust filled my heart.”(Shelley 59). It was at that moment when Frankenstein made a terrible mistake; abandoning the creature. “Unable to endure the aspect of the being I had created, I rushed out of the room and continued a long time traversing my bedchamber, unable to compose my mind to sleep.”(Shelley 59). There are only two reasons thought of as to why he left it to fend for itself: pure shock and regret in his decision making, and repeating what his father did to him (cowardice). In the beginning of the book, just after his mother died his father sent Victor away to school to study his science. Instead of pushing Victor away during this depressing time, he should have kept him close and went through a time of mourning together as family.

Since Victor had no understanding of what parenting is, like his father, he ran from his problem and had no intention of teaching it the ways of the world. Due to his abandonment, the creature became angry, and scared. During this time, it led him to do bad things; kill people. Frankenstein then went to seek out the creature to be rid of him. Once he got ahold of it, the creature said, “‘I expected this reception,’ said the daemon. ‘All men hate the wretched; how, then, must I be hated, who am miserable beyond all living things! Yet you, my creator, detest and spurn me, thy creature, to whom thou art bound by ties only dissoluble by the annihilation of one of us. You purpose to kill me. How dare you sport thus with life? Do your duty towards me, and I will do mine towards you and the rest of mankind.

If you will comply with my conditions, I will leave them and you at peace; but if you refuse, I will glut the maw of death, until it be satiated with the blood of your remaining friends.’”(Shelley 113). In this quote, the creature questions Frankenstein reason to why he brought him to life if all he wants to do is kill him and the rest of mankind sees it as this ratchet monster, essentially blaming him for creating him. While murdering people wasn’t the best idea, the creature didn’t know any better because it wasn’t conditioned/trained right from wrong. If Frankenstein would have taught the creature the ways of human life like polite mannerisms, basic education, and cognitive thinking, most likely the murders would not have taken place. Given these points, it is Frankenstein’s fault that his abandonment brought bitterness upon the creature, causing harm towards others.

In conclusion, Victor Frankenstein’s pride and hunger for recognition blinded his reasoning and abandoning the creature brought blame upon himself. His pride grew with the knowledge he obtained from his schooling and philosophers he read about, for example Cornelius Agrippa; therefore contributing to his narcissism and not thinking about the whole picture. Frankenstein also abandoned the creature leaving it to fester in anger and confusion towards his existence that it displaced its emotions on others, killing them. Ultimately, the blame should be laid on Frankenstein’s shoulders due to excessive pride and refusing his responsibility towards his creation, the creature.

Philosophy of Dualism and Materialism in “Frankenstein”