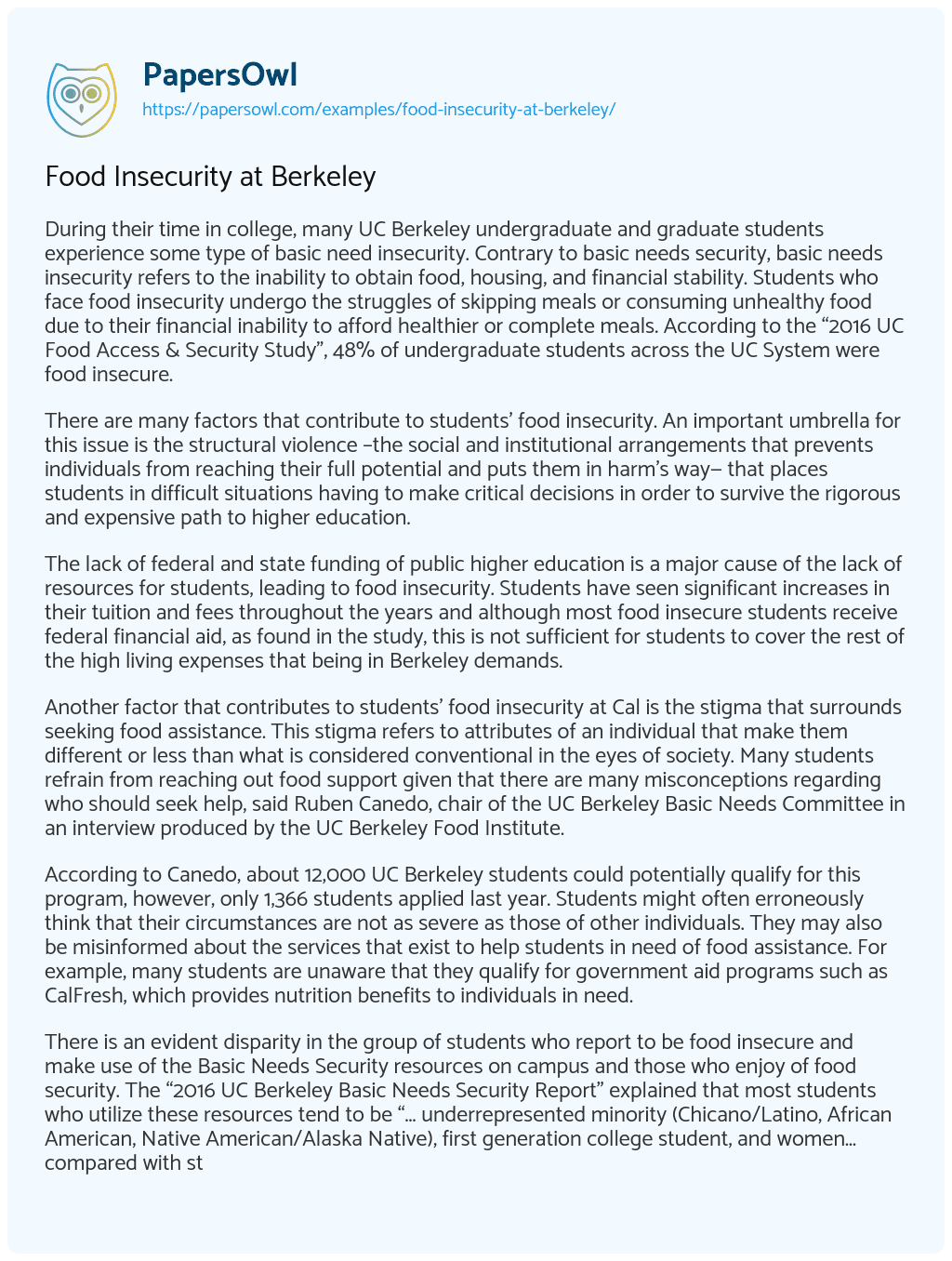 During their time in college, many UC Berkeley undergraduate and graduate students experience some type of basic need insecurity. Contrary to basic needs security, basic needs insecurity refers to the inability to obtain food, housing, and financial stability. Students who face food insecurity undergo the struggles of skipping meals or consuming unhealthy food due to their financial inability to afford healthier or complete meals. According to the “2016 UC Food Access & Security Study”, 48% of undergraduate students across the UC System were food insecure.

There are many factors that contribute to students’ food insecurity. An important umbrella for this issue is the structural violence –the social and institutional arrangements that prevents individuals from reaching their full potential and puts them in harm’s way— that places students in difficult situations having to make critical decisions in order to survive the rigorous and expensive path to higher education.

The lack of federal and state funding of public higher education is a major cause of the lack of resources for students, leading to food insecurity. Students have seen significant increases in their tuition and fees throughout the years and although most food insecure students receive federal financial aid, as found in the study, this is not sufficient for students to cover the rest of the high living expenses that being in Berkeley demands.

Another factor that contributes to students’ food insecurity at Cal is the stigma that surrounds seeking food assistance. This stigma refers to attributes of an individual that make them different or less than what is considered conventional in the eyes of society. Many students refrain from reaching out food support given that there are many misconceptions regarding who should seek help, said Ruben Canedo, chair of the UC Berkeley Basic Needs Committee in an interview produced by the UC Berkeley Food Institute.

According to Canedo, about 12,000 UC Berkeley students could potentially qualify for this program, however, only 1,366 students applied last year. Students might often erroneously think that their circumstances are not as severe as those of other individuals. They may also be misinformed about the services that exist to help students in need of food assistance. For example, many students are unaware that they qualify for government aid programs such as CalFresh, which provides nutrition benefits to individuals in need.

There is an evident disparity in the group of students who report to be food insecure and make use of the Basic Needs Security resources on campus and those who enjoy of food security. The “2016 UC Berkeley Basic Needs Security Report” explained that most students who utilize these resources tend to be “… underrepresented minority (Chicano/Latino, African American, Native American/Alaska Native), first generation college student, and women… compared with students of other race/ethnicity, first generation college, and gender classifications”(P.27). The students who make the most use of the Basic Needs Security services on campus tend to be the most marginalized student groups. This reflects the gap that exists between the current campus food system and the students it serves.

In an effort to end the basic needs insecurity at Berkeley and across the entire UC system, the UC Berkeley Basic Needs Committee created the Basic Needs Model. As explained in the “2016 UC Berkeley Basic Needs Security Report,” this model aims to not only respond to food insecurity crisis directly on campus, but also to prevent this problem before it appears in the first place, as well as to create a sustainable food security system long term.

This model brings about a sense of collective efficacy, which is the shared thought that change is possible through unified efforts. Through this model, several programs, organizations, and services provided on campus, such as the Food Pantry, CalFresh Clinics, the Global Food Initiative, Bridges, the Foodscape Map among many others, have the same goal in common, to eradicate food insecurity on campus and help students to be healthy and successful in their academic careers.

The Foodscape Map, for instance, provides data regarding the structural factors that affect the food system on campus and displays the obstacles that marginalized communities face with this system. This resource intends to provide the necessary information to create an equitable and inclusive food system in Berkeley. An equitable campus food system would consist of food resources and measures that address the specific needs of the diverse student groups on campus in order for all students to be able to reach the same level of success and wellness during their academic experience.

College Food Insecurity: how Big is the Problem?

The Effects of Food Insecurity in the Community

What is Food Insecurity in America?

Food Insecurity in the Bronx