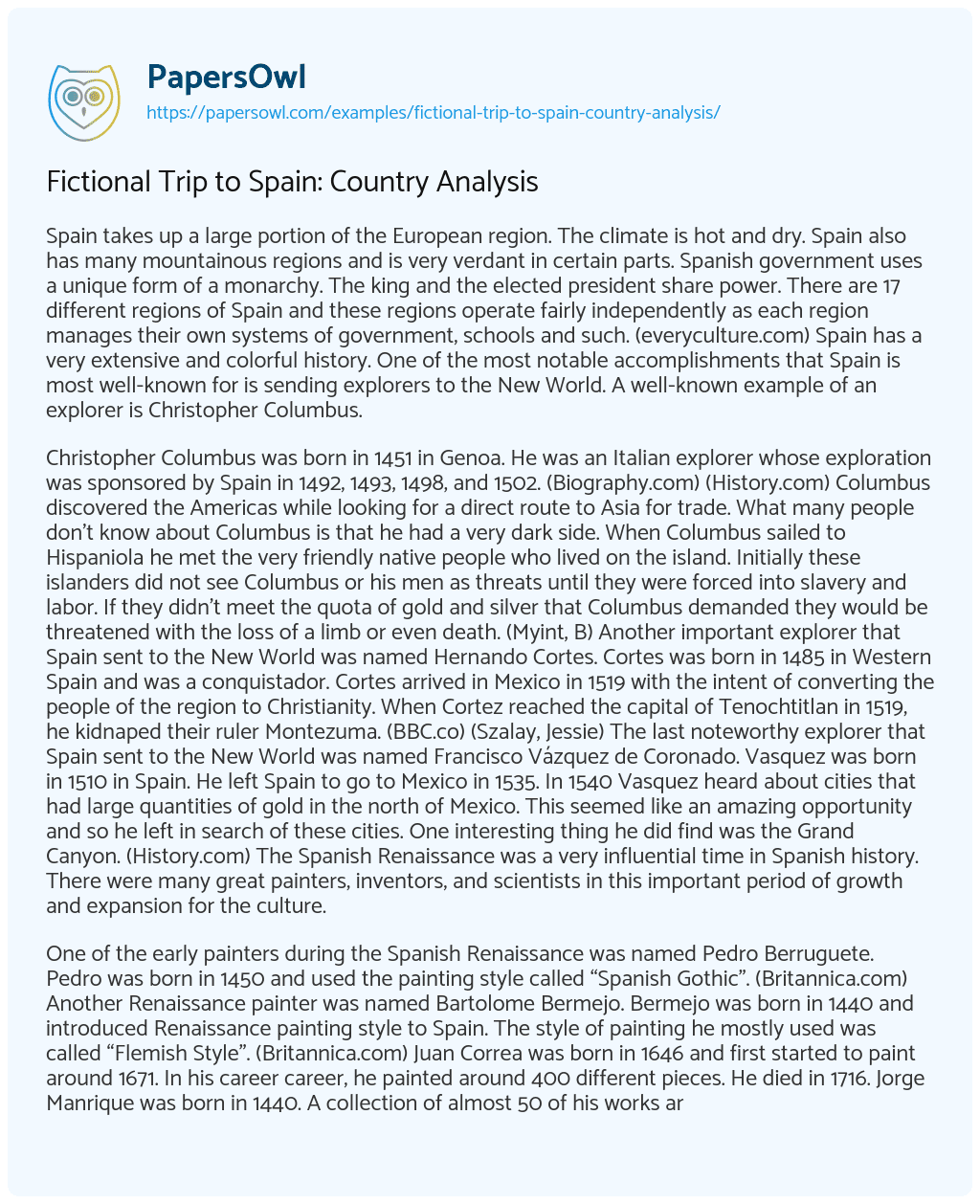 Spain takes up a large portion of the European region. The climate is hot and dry. Spain also has many mountainous regions and is very verdant in certain parts. Spanish government uses a unique form of a monarchy. The king and the elected president share power. There are 17 different regions of Spain and these regions operate fairly independently as each region manages their own systems of government, schools and such. (everyculture.com) Spain has a very extensive and colorful history. One of the most notable accomplishments that Spain is most well-known for is sending explorers to the New World. A well-known example of an explorer is Christopher Columbus.

Christopher Columbus was born in 1451 in Genoa. He was an Italian explorer whose exploration was sponsored by Spain in 1492, 1493, 1498, and 1502. (Biography.com) (History.com) Columbus discovered the Americas while looking for a direct route to Asia for trade. What many people don’t know about Columbus is that he had a very dark side. When Columbus sailed to Hispaniola he met the very friendly native people who lived on the island. Initially these islanders did not see Columbus or his men as threats until they were forced into slavery and labor. If they didn’t meet the quota of gold and silver that Columbus demanded they would be threatened with the loss of a limb or even death. (Myint, B) Another important explorer that Spain sent to the New World was named Hernando Cortes. Cortes was born in 1485 in Western Spain and was a conquistador. Cortes arrived in Mexico in 1519 with the intent of converting the people of the region to Christianity. When Cortez reached the capital of Tenochtitlan in 1519, he kidnaped their ruler Montezuma. (BBC.co) (Szalay, Jessie) The last noteworthy explorer that Spain sent to the New World was named Francisco Vázquez de Coronado. Vasquez was born in 1510 in Spain. He left Spain to go to Mexico in 1535. In 1540 Vasquez heard about cities that had large quantities of gold in the north of Mexico. This seemed like an amazing opportunity and so he left in search of these cities. One interesting thing he did find was the Grand Canyon. (History.com) The Spanish Renaissance was a very influential time in Spanish history. There were many great painters, inventors, and scientists in this important period of growth and expansion for the culture.

One of the early painters during the Spanish Renaissance was named Pedro Berruguete. Pedro was born in 1450 and used the painting style called “Spanish Gothic”. (Britannica.com) Another Renaissance painter was named Bartolome Bermejo. Bermejo was born in 1440 and introduced Renaissance painting style to Spain. The style of painting he mostly used was called “Flemish Style”. (Britannica.com) Juan Correa was born in 1646 and first started to paint around 1671. In his career career, he painted around 400 different pieces. He died in 1716. Jorge Manrique was born in 1440. A collection of almost 50 of his works are written in what is called “The Songbook.” Most of his works are about love stories. Jorge uses passion for poetry in his life in the military. Jorge does not have very many poems, but most of his poems were very in-depth about emotion, which made them very influential. He later died in 1479. Bartolomé de Las Casas was born in 1484, and died in 1516. Bartolomé was a Spanish historian and missionary. He was an advocate of the abolition of slavery amongst indigenous people in the Indies. Bartolome became a Roman Catholic priest and 1513 and started to become concerned about how the native people in “Spanish America” were being treated. He later wrote a book that took several years to finish called the “History of the Indies”. The purpose of this book was to educate the public as well as future generations about what was going on in this time period. Architecture during the Spanish renaissance was heavily influenced by the moors from north Africa. In the 15th century, Renaissance architecture said to pop up around Spain and is seen very commonly as a form known as plasteresque.

The Iberians were the first group of people to inhabit Spain and arrived around 3000 BCE. It is believed that they lived in the North of Spain and South of France. The Romans came to Spain and 219 B.C.E. with the intention of defeating the Carthaginians who were already in Spain. The Romans had a lasting impact on Spain in terms of architecture. They built many roads, bridges, arches, and aqueducts. The Arabs came to Spain and 711 CE and came from the North of Africa and had a great influence on Spanish culture and language as well. The influence of the Arabs in Spain allowed Spain to be diverse from all of the other regions in Europe. They contributed many scientific advancements such as chemistry, physics, geography, and philosophy. Education was also available to everyone in Spain during this time. The Spanish Inquisition began in 1478 and was started by the Catholic monarchs. Inquisition was started for the purpose of “purifying Spain“.

Many Jews were killed during this time. Inquisition is well known because of it it’s extreme harshness that they displayed towards the Jews and the Muslims. The inquisition was around for about 200 years. A total of around 32,000 people were killed. The main reason why this was all started in Spain was to route out the Jewish population over the fear that the growing population would soon seize power in Spain.

An Analysis of Western Civilization in European Renaissance

History of Philippines and Country Analysis