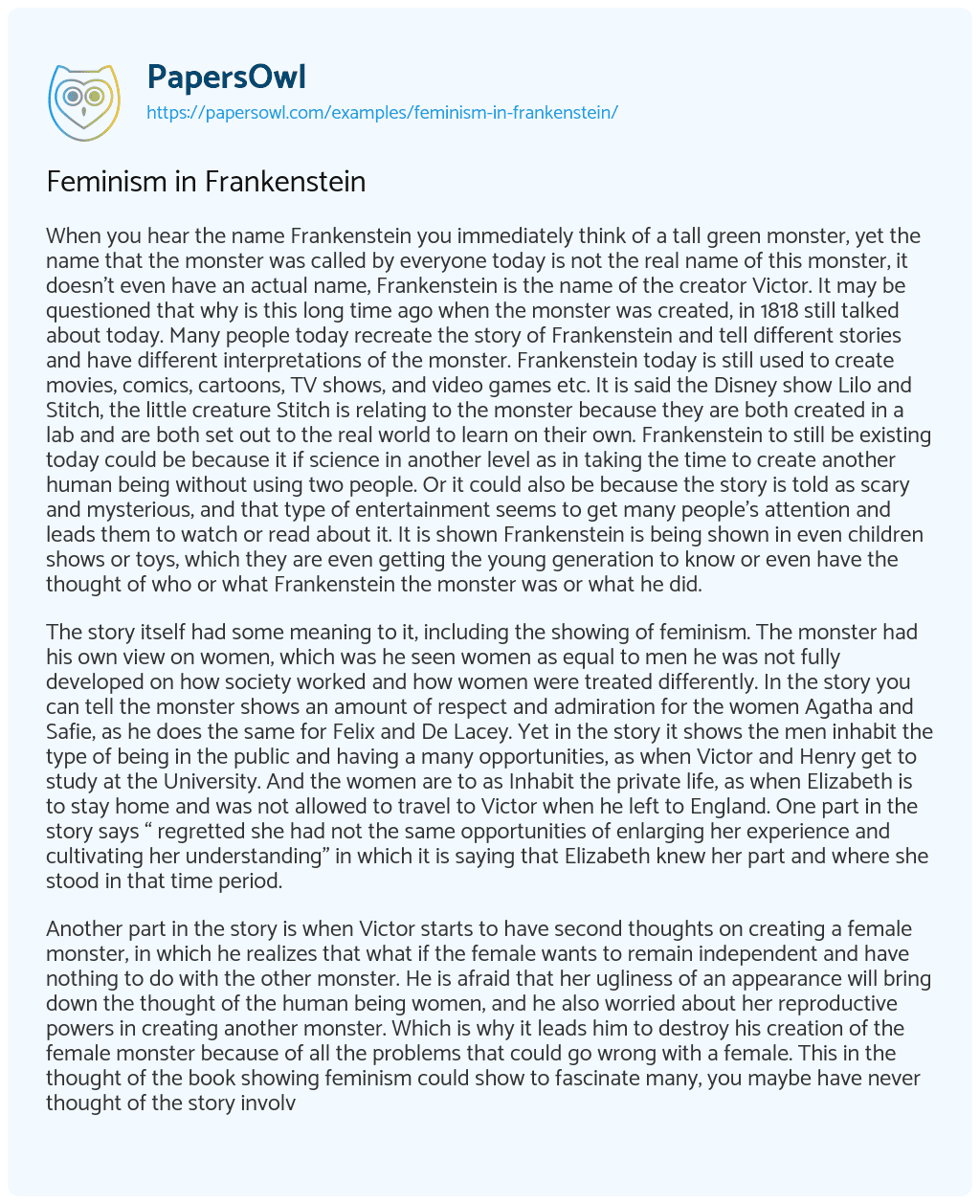 When you hear the name Frankenstein you immediately think of a tall green monster, yet the name that the monster was called by everyone today is not the real name of this monster, it doesn’t even have an actual name, Frankenstein is the name of the creator Victor. It may be questioned that why is this long time ago when the monster was created, in 1818 still talked about today. Many people today recreate the story of Frankenstein and tell different stories and have different interpretations of the monster. Frankenstein today is still used to create movies, comics, cartoons, TV shows, and video games etc. It is said the Disney show Lilo and Stitch, the little creature Stitch is relating to the monster because they are both created in a lab and are both set out to the real world to learn on their own. Frankenstein to still be existing today could be because it if science in another level as in taking the time to create another human being without using two people. Or it could also be because the story is told as scary and mysterious, and that type of entertainment seems to get many people’s attention and leads them to watch or read about it. It is shown Frankenstein is being shown in even children shows or toys, which they are even getting the young generation to know or even have the thought of who or what Frankenstein the monster was or what he did.

The story itself had some meaning to it, including the showing of feminism. The monster had his own view on women, which was he seen women as equal to men he was not fully developed on how society worked and how women were treated differently. In the story you can tell the monster shows an amount of respect and admiration for the women Agatha and Safie, as he does the same for Felix and De Lacey. Yet in the story it shows the men inhabit the type of being in the public and having a many opportunities, as when Victor and Henry get to study at the University. And the women are to as Inhabit the private life, as when Elizabeth is to stay home and was not allowed to travel to Victor when he left to England. One part in the story says “ regretted she had not the same opportunities of enlarging her experience and cultivating her understanding” in which it is saying that Elizabeth knew her part and where she stood in that time period.

Another part in the story is when Victor starts to have second thoughts on creating a female monster, in which he realizes that what if the female wants to remain independent and have nothing to do with the other monster. He is afraid that her ugliness of an appearance will bring down the thought of the human being women, and he also worried about her reproductive powers in creating another monster. Which is why it leads him to destroy his creation of the female monster because of all the problems that could go wrong with a female. This in the thought of the book showing feminism could show to fascinate many, you maybe have never thought of the story involving this, or it could be that the thought of a big green monster seems to keep people entertained and fascinated.

Frankenstein is still around today for many reasons that we may not even think. Many people believe it is still around due to the thought of something scary, a big green ugly monster, and people love the thought of something scary or in crime related, or it could be for all the real things behind the actual story on the feminism and of what they put the monster through and how the monster was treated, of loneliness and betrayed. In today’s generation Frankenstein could be used in many new ways knowing all the new techniques and technology that we have today.