Feeding the Destruction of the American Dream 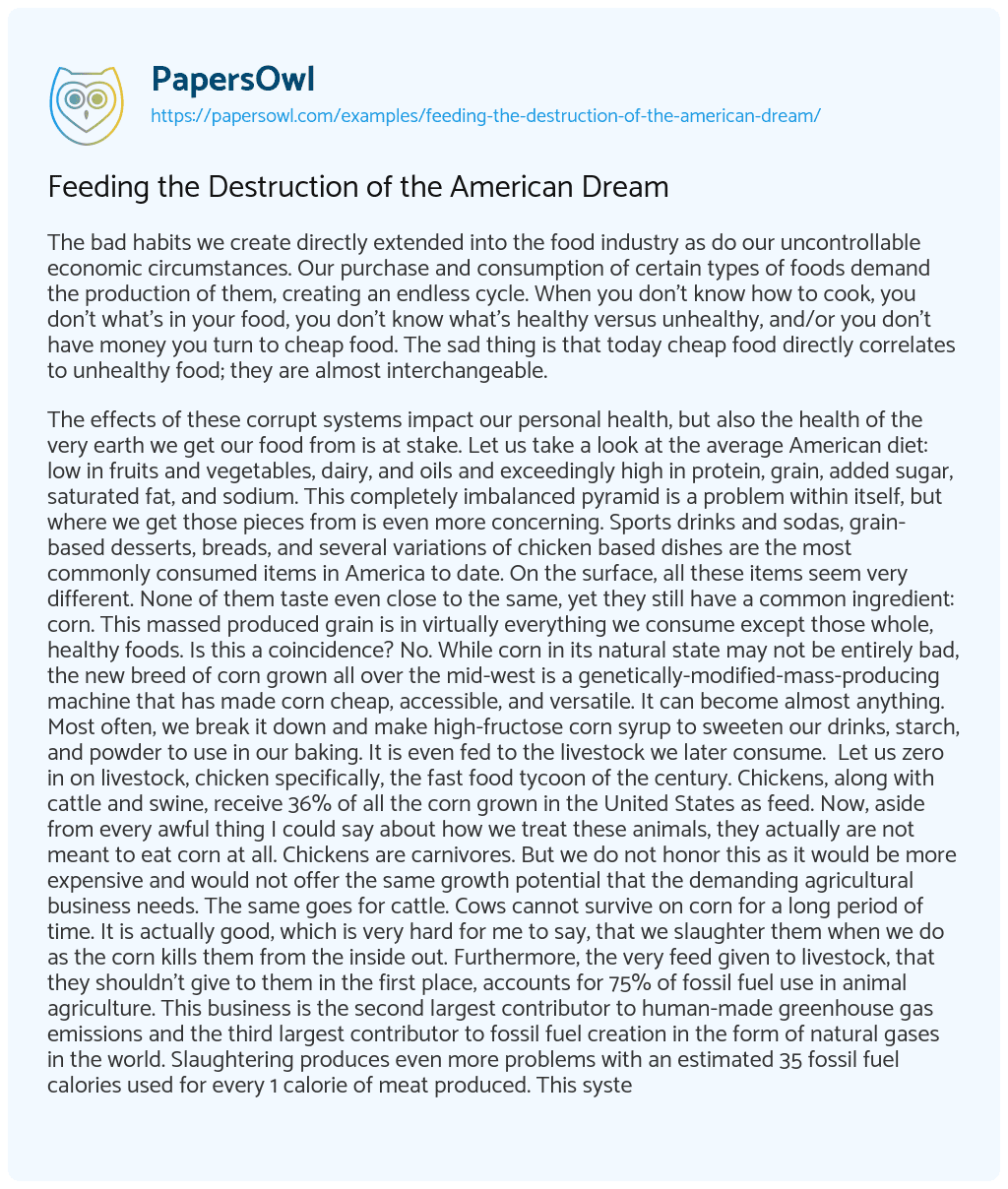 The bad habits we create directly extended into the food industry as do our uncontrollable economic circumstances. Our purchase and consumption of certain types of foods demand the production of them, creating an endless cycle. When you don’t know how to cook, you don’t what’s in your food, you don’t know what’s healthy versus unhealthy, and/or you don’t have money you turn to cheap food. The sad thing is that today cheap food directly correlates to unhealthy food; they are almost interchangeable.

The effects of these corrupt systems impact our personal health, but also the health of the very earth we get our food from is at stake. Let us take a look at the average American diet: low in fruits and vegetables, dairy, and oils and exceedingly high in protein, grain, added sugar, saturated fat, and sodium. This completely imbalanced pyramid is a problem within itself, but where we get those pieces from is even more concerning. Sports drinks and sodas, grain-based desserts, breads, and several variations of chicken based dishes are the most commonly consumed items in America to date. On the surface, all these items seem very different. None of them taste even close to the same, yet they still have a common ingredient: corn. This massed produced grain is in virtually everything we consume except those whole, healthy foods. Is this a coincidence? No. While corn in its natural state may not be entirely bad, the new breed of corn grown all over the mid-west is a genetically-modified-mass-producing machine that has made corn cheap, accessible, and versatile. It can become almost anything. Most often, we break it down and make high-fructose corn syrup to sweeten our drinks, starch, and powder to use in our baking. It is even fed to the livestock we later consume.  Let us zero in on livestock, chicken specifically, the fast food tycoon of the century. Chickens, along with cattle and swine, receive 36% of all the corn grown in the United States as feed. Now, aside from every awful thing I could say about how we treat these animals, they actually are not meant to eat corn at all. Chickens are carnivores. But we do not honor this as it would be more expensive and would not offer the same growth potential that the demanding agricultural business needs. The same goes for cattle. Cows cannot survive on corn for a long period of time. It is actually good, which is very hard for me to say, that we slaughter them when we do as the corn kills them from the inside out. Furthermore, the very feed given to livestock, that they shouldn’t give to them in the first place, accounts for 75% of fossil fuel use in animal agriculture. This business is the second largest contributor to human-made greenhouse gas emissions and the third largest contributor to fossil fuel creation in the form of natural gases in the world. Slaughtering produces even more problems with an estimated 35 fossil fuel calories used for every 1 calorie of meat produced. This system “is the leading cause of deforestation, water and air pollution and biodiversity loss” (“Animal Agriculture’s Impact on Climate Change”) globally. Now if this is what these “safe” ingredients are doing to our planet, what are they doing to our bodies?

As stated previously, corn itself is not really the problem. It is the breakdown and ways in which it is used that are truly a problem. High fructose corn syrup, the number one source of calories in the United States, has the most adverse effects. Unlike glucose, fructose increases bad cholesterol levels and is metabolized to fat faster than any other form of sugar. It is also linked to cancer, heart disease, diabetes, aging, arthritis, osteoporosis, obesity, and metabolic syndrome. Cutting this artificial sweetener from the American diet would make drastic positive changes to the health of the country.

Now the question is, why don’t we change? We know all these horrible things about the content of our food, so what is stopping us? The same reason why we don’t like to change the color of our bedroom or move to a new city: change makes people uncomfortable. We become so accustomed to our ways, that we become rigid within them, defined by them. The same goes for our food. “American food” is burgers and fries and chicken nuggets and hot dogs. It is our culture. So, what can we do? We owe it to each other to do something, but what can we realistically do? How do you just change a whole cultural identity? How do we do it fast enough to save what we have left? We prioritize it and we change it little by little. Fast food is a seemingly irreplaceable perpetual institution. The reality of the situation is that we can’t change it overnight. Wiping out the industry entirely would wreak havoc on the economy, society, health, and unity of the country. These predicted outcomes are what make the industry seem so unbreakable. How can we change an industry that so many people depend upon for income, food, insurance, etc.? This is why we must do it gradually. Start with education. Teach people what they are putting in their bodies. Teach them how to cook meals that are fast and easy. Teach people how to shop for healthy foods that won’t break the bank. Then, create a demand for healthy food. Force agricultural industry to change their ways or at least be more honest about them by purchasing wholesome food and not fast food. American society is built on three principles: freedom, progress, and individualism. Right now we prioritize money and convenience above all else, before our health, our livelihood, and our future. This directly negates the principle of progress by limiting us only to what we can achieve at a mere portion of our capacity. By creating gradual, but impactful changes in the general public, the industry will be influenced. Fast food will always reform to fit the demands of the American people as it has before and will again and again.

Many will say that the point of view I speak from is too extremist. What I say to that is that denying our country’s problems, our world’s problems is just as extreme. We are eating our way to the destruction of our health, of our planet, of our futures. It is serious and deserves extreme communication and actions. We as people are responsible for the failure or success of our country. And with America’s powerful position on the global stage, we are also partially responsible for the fate of the rest of the world. We must prioritize the teaching of cooking and health, the accessibility of wholesome foods, and the conscious production of fare.

Feeding the Destruction of the American Dream. (2019, Dec 01). Retrieved from https://papersowl.com/examples/feeding-the-destruction-of-the-american-dream/

The American Dream and the Growth of Cities