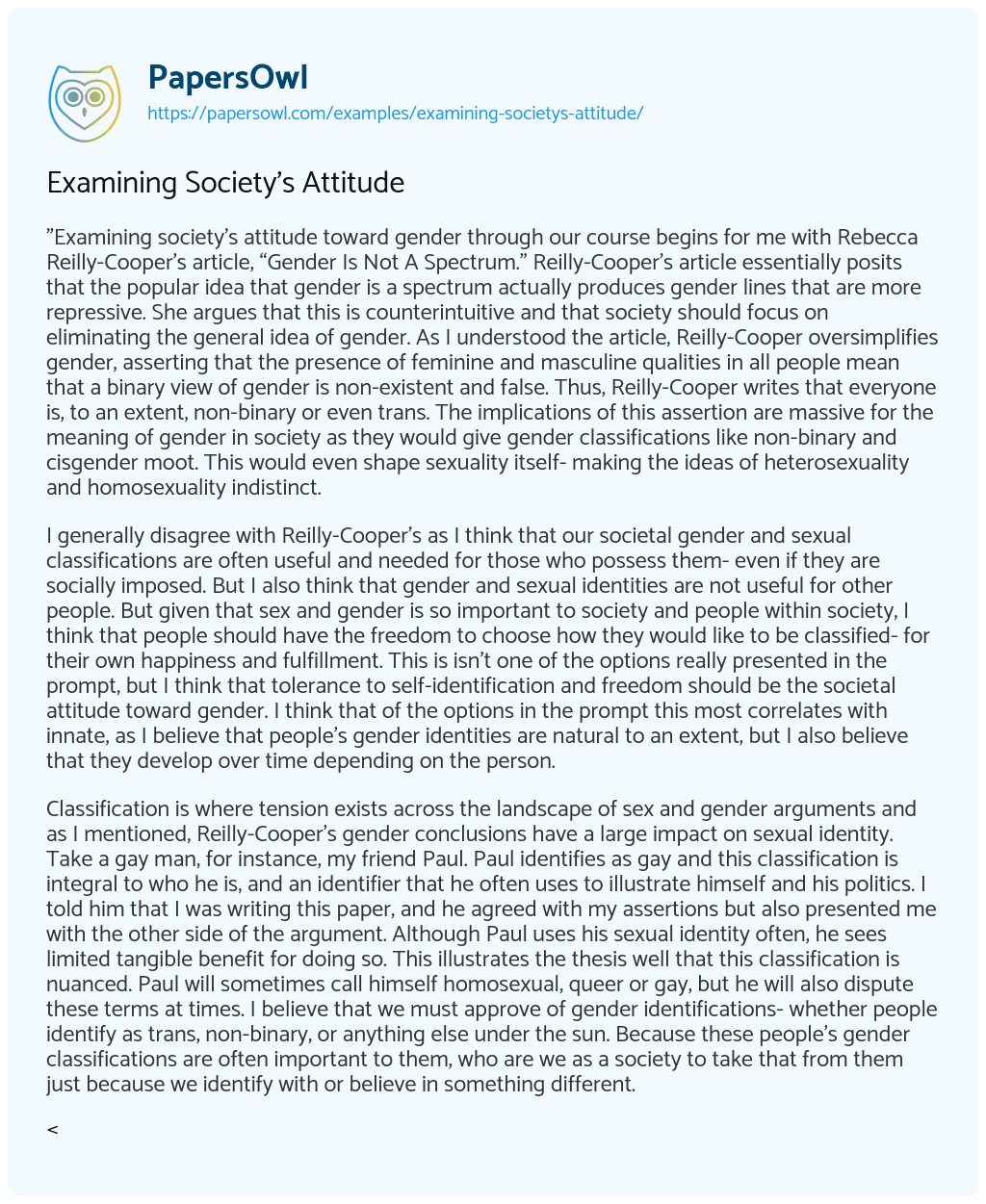 “Examining society’s attitude toward gender through our course begins for me with Rebecca Reilly-Cooper’s article, “Gender Is Not A Spectrum.” Reilly-Cooper’s article essentially posits that the popular idea that gender is a spectrum actually produces gender lines that are more repressive. She argues that this is counterintuitive and that society should focus on eliminating the general idea of gender. As I understood the article, Reilly-Cooper oversimplifies gender, asserting that the presence of feminine and masculine qualities in all people mean that a binary view of gender is non-existent and false. Thus, Reilly-Cooper writes that everyone is, to an extent, non-binary or even trans. The implications of this assertion are massive for the meaning of gender in society as they would give gender classifications like non-binary and cisgender moot. This would even shape sexuality itself- making the ideas of heterosexuality and homosexuality indistinct.

I generally disagree with Reilly-Cooper’s as I think that our societal gender and sexual classifications are often useful and needed for those who possess them- even if they are socially imposed. But I also think that gender and sexual identities are not useful for other people. But given that sex and gender is so important to society and people within society, I think that people should have the freedom to choose how they would like to be classified- for their own happiness and fulfillment. This is isn’t one of the options really presented in the prompt, but I think that tolerance to self-identification and freedom should be the societal attitude toward gender. I think that of the options in the prompt this most correlates with innate, as I believe that people’s gender identities are natural to an extent, but I also believe that they develop over time depending on the person.

Classification is where tension exists across the landscape of sex and gender arguments and as I mentioned, Reilly-Cooper’s gender conclusions have a large impact on sexual identity. Take a gay man, for instance, my friend Paul. Paul identifies as gay and this classification is integral to who he is, and an identifier that he often uses to illustrate himself and his politics. I told him that I was writing this paper, and he agreed with my assertions but also presented me with the other side of the argument. Although Paul uses his sexual identity often, he sees limited tangible benefit for doing so. This illustrates the thesis well that this classification is nuanced. Paul will sometimes call himself homosexual, queer or gay, but he will also dispute these terms at times. I believe that we must approve of gender identifications- whether people identify as trans, non-binary, or anything else under the sun. Because these people’s gender classifications are often important to them, who are we as a society to take that from them just because we identify with or believe in something different.

In attempting to shape gender as a single story and as something with a “right answer,” Reilly-Cooper undermines the complexity of gender identity. Because, as I mentioned above, gender is very complex and people have their own preferences for how it should be handled. Reilly-Cooper says that “The solution to an oppressive system that puts people into pink and blue boxes is not to create more and more boxes that are any colour but blue or pink. The solution is to tear down the boxes altogether. and that there is a clear politics behind it.” By tearing down the boxes together, Reilly-Cooper is putting everyone into one box which is a drastic oversimplification and leaves many unhappy. Many express themselves through their gender identity and use it to find a group to associate with and a set of guiding principles.

In conclusion, Reilly-Cooper oversimplifies what the societal gender view should be, arguing that society should essentially be non-gender. I believe that society’s view of gender should be a view of tolerance toward the different forms that people’s gender identity can take on. I think that this is important because what we ultimately need to aim for in gender views is enabling people to be happy with their gender. I think that we can keep gender broad and distinct gender communities inclusive and remove negative stigmas around unique genders. And that societal view will accomplish a lot of good for society and for those that are currently being discriminated against for their gender.”

“Jeanette Winterson’s, Oranges are not the only Fruit