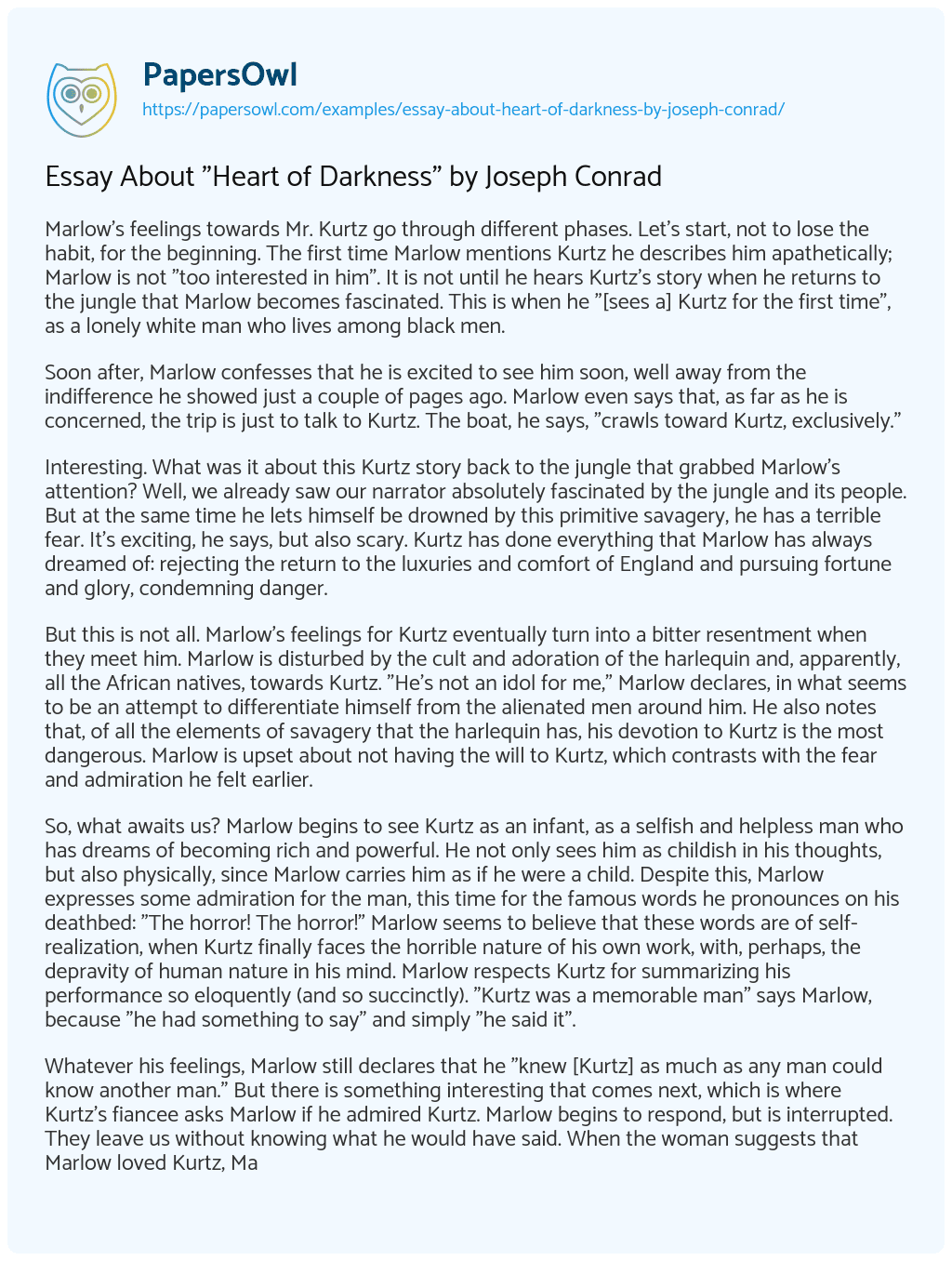 Marlow’s feelings towards Mr. Kurtz go through different phases. Let’s start, not to lose the habit, for the beginning. The first time Marlow mentions Kurtz he describes him apathetically; Marlow is not “too interested in him”. It is not until he hears Kurtz’s story when he returns to the jungle that Marlow becomes fascinated. This is when he “[sees a] Kurtz for the first time”, as a lonely white man who lives among black men.

Soon after, Marlow confesses that he is excited to see him soon, well away from the indifference he showed just a couple of pages ago. Marlow even says that, as far as he is concerned, the trip is just to talk to Kurtz. The boat, he says, “crawls toward Kurtz, exclusively.”

Interesting. What was it about this Kurtz story back to the jungle that grabbed Marlow’s attention? Well, we already saw our narrator absolutely fascinated by the jungle and its people. But at the same time he lets himself be drowned by this primitive savagery, he has a terrible fear. It’s exciting, he says, but also scary. Kurtz has done everything that Marlow has always dreamed of: rejecting the return to the luxuries and comfort of England and pursuing fortune and glory, condemning danger.

But this is not all. Marlow’s feelings for Kurtz eventually turn into a bitter resentment when they meet him. Marlow is disturbed by the cult and adoration of the harlequin and, apparently, all the African natives, towards Kurtz. “He’s not an idol for me,” Marlow declares, in what seems to be an attempt to differentiate himself from the alienated men around him. He also notes that, of all the elements of savagery that the harlequin has, his devotion to Kurtz is the most dangerous. Marlow is upset about not having the will to Kurtz, which contrasts with the fear and admiration he felt earlier.

So, what awaits us? Marlow begins to see Kurtz as an infant, as a selfish and helpless man who has dreams of becoming rich and powerful. He not only sees him as childish in his thoughts, but also physically, since Marlow carries him as if he were a child. Despite this, Marlow expresses some admiration for the man, this time for the famous words he pronounces on his deathbed: “The horror! The horror!” Marlow seems to believe that these words are of self-realization, when Kurtz finally faces the horrible nature of his own work, with, perhaps, the depravity of human nature in his mind. Marlow respects Kurtz for summarizing his performance so eloquently (and so succinctly). “Kurtz was a memorable man” says Marlow, because “he had something to say” and simply “he said it”.

Whatever his feelings, Marlow still declares that he “knew [Kurtz] as much as any man could know another man.” But there is something interesting that comes next, which is where Kurtz’s fiancee asks Marlow if he admired Kurtz. Marlow begins to respond, but is interrupted. They leave us without knowing what he would have said. When the woman suggests that Marlow loved Kurtz, Marlow remains in a “horrible silence”. At the end of the narrative, what do you really feel about Kurtz? Well, good question.

As you may have noticed, Marlow experiences a range of complicated emotions towards Kurtz. For Marlow, things with Kurtz should be pretty simple. He thought he admired the guy and ended up finding the man impaling heads, so he stopped admiring him. Excellent. We are going home. But no, it’s not that easy. Go home if you want, but you will miss what makes The Heart of Darkness a powerful, fascinating and famous work.

Let’s propose a crazy question: Is Marlow like Kurtz? Oh no! How awful! Yes, precisely, our protagonist, our dear and likable Marlow, is equal to the madman, the cult inspirer, who impales heads. Let’s start with the basics.

Like Kurtz, Marlow comes from a European family of upper middle class. Both with a certain arrogant nature. Marlow considers himself above the manager, the uncle and the sailor, while Kurtz puts himself on the African natives. Both have obsessive features; Marlow is increasingly obsessed with Africa and finding Kurtz, while Kurtz does not stop at his exploitation of ivory. Both have powerful connections (Marlow through his aunt) that allow them to be in contact with positions of power in the Company.

But it gets better, because both have disturbingly similar reactions in their incursions into the interior of Africa. Marlow and Kurtz, despite their desire to conquer the wild, become victims of the wild. To make this point as clear as possible, Conrad uses several specific and well-marked moments to stick it in his head. When Marlow watches the natives of Africa dance on the shore, he wonders why he does not go to shore to.

Essay About "Heart of Darkness" by Joseph Conrad. (2021, Jul 03). Retrieved from https://papersowl.com/examples/essay-about-heart-of-darkness-by-joseph-conrad/