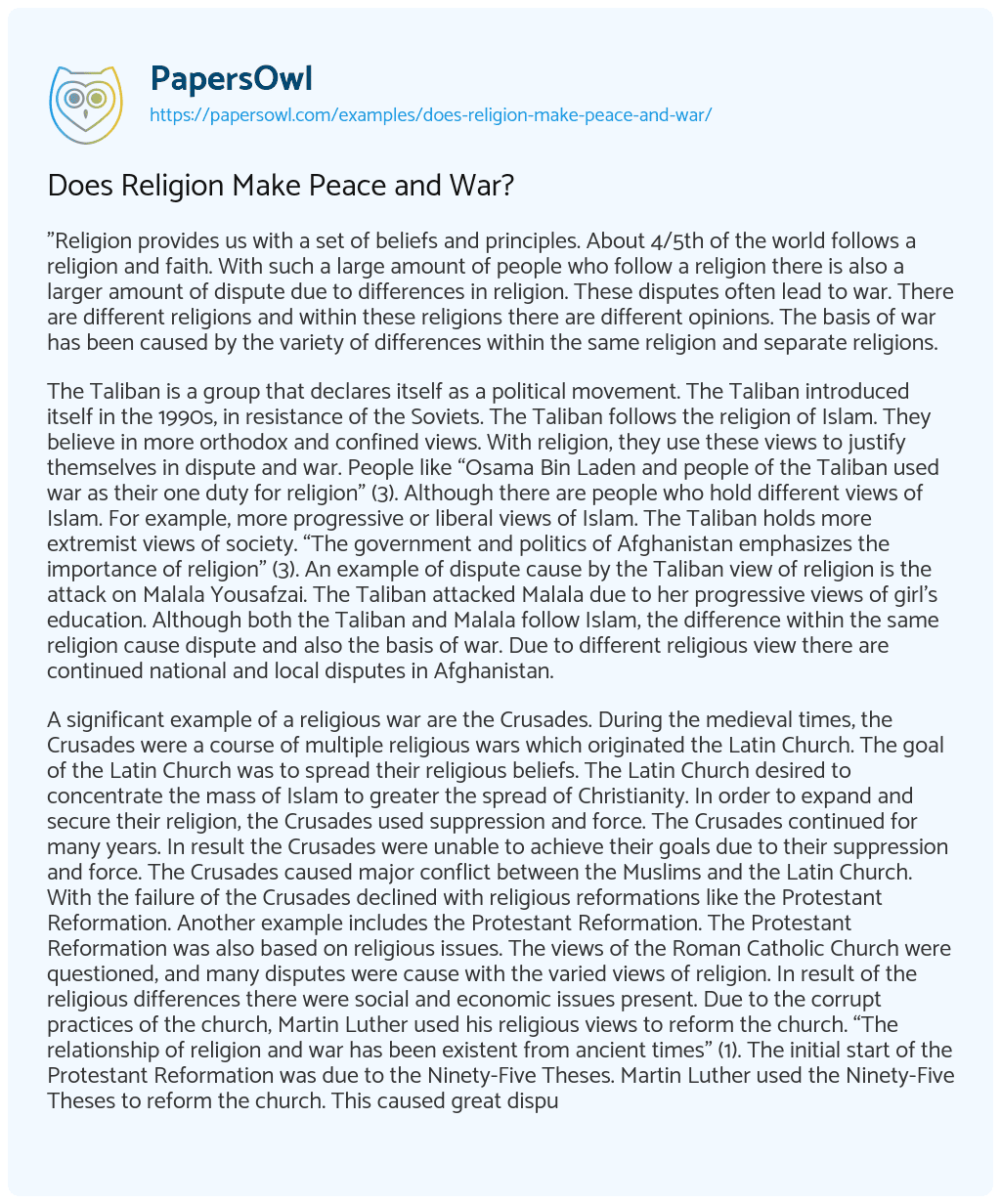 “Religion provides us with a set of beliefs and principles. About 4/5th of the world follows a religion and faith. With such a large amount of people who follow a religion there is also a larger amount of dispute due to differences in religion. These disputes often lead to war. There are different religions and within these religions there are different opinions. The basis of war has been caused by the variety of differences within the same religion and separate religions.

The Taliban is a group that declares itself as a political movement. The Taliban introduced itself in the 1990s, in resistance of the Soviets. The Taliban follows the religion of Islam. They believe in more orthodox and confined views. With religion, they use these views to justify themselves in dispute and war. People like “Osama Bin Laden and people of the Taliban used war as their one duty for religion” (3). Although there are people who hold different views of Islam. For example, more progressive or liberal views of Islam. The Taliban holds more extremist views of society. “The government and politics of Afghanistan emphasizes the importance of religion” (3). An example of dispute cause by the Taliban view of religion is the attack on Malala Yousafzai. The Taliban attacked Malala due to her progressive views of girl’s education. Although both the Taliban and Malala follow Islam, the difference within the same religion cause dispute and also the basis of war. Due to different religious view there are continued national and local disputes in Afghanistan.

According to Jonathan Manthorpe religion is not the basis of war and it is used as an excuse but not a motive (7). For example, China’s quest to take Taiwan. This dispute is more heavily based on economic and political stances compared to religious. The significant reason the disputes began was due to imperialism. China desired to control the land of Taiwan and used religion as an excuse but not a real motive. Although Manthorpe’s claim is valid, the different views of the government may have been influenced from religion. Therefore, the basis of religion is present in all wars and disputes. Manthorpe suggest that the excuse of religion is used as a motive to justify failure or success.

War is not cause by a specific religion or a specific group of people. It is the differences of religion that causes these disputes. Different religions with different ideologies cause misunderstanding and difference in opinion. From the beginning of time religion has been the origin of war and disputes.”

Does Religion Make Peace and War?. (2021, Jul 03). Retrieved from https://papersowl.com/examples/does-religion-make-peace-and-war/

Does Religion Cause Conflict or Peace ?

The Difference between a Cult and Religion