Discoveries in the Field of Virology 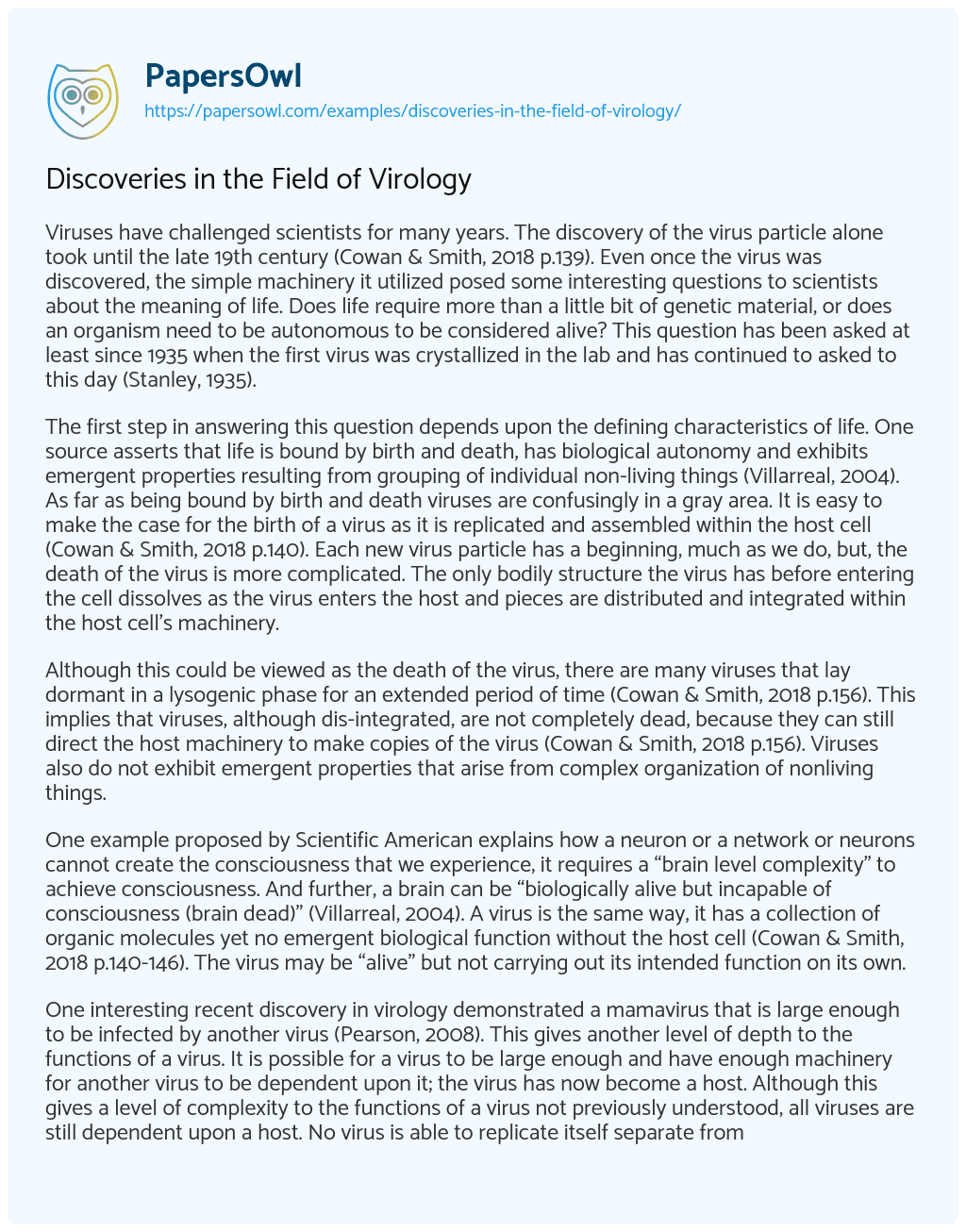 Viruses have challenged scientists for many years. The discovery of the virus particle alone took until the late 19th century (Cowan & Smith, 2018 p.139). Even once the virus was discovered, the simple machinery it utilized posed some interesting questions to scientists about the meaning of life. Does life require more than a little bit of genetic material, or does an organism need to be autonomous to be considered alive? This question has been asked at least since 1935 when the first virus was crystallized in the lab and has continued to asked to this day (Stanley, 1935).

The first step in answering this question depends upon the defining characteristics of life. One source asserts that life is bound by birth and death, has biological autonomy and exhibits emergent properties resulting from grouping of individual non-living things (Villarreal, 2004). As far as being bound by birth and death viruses are confusingly in a gray area. It is easy to make the case for the birth of a virus as it is replicated and assembled within the host cell (Cowan & Smith, 2018 p.140). Each new virus particle has a beginning, much as we do, but, the death of the virus is more complicated. The only bodily structure the virus has before entering the cell dissolves as the virus enters the host and pieces are distributed and integrated within the host cell’s machinery.

Although this could be viewed as the death of the virus, there are many viruses that lay dormant in a lysogenic phase for an extended period of time (Cowan & Smith, 2018 p.156). This implies that viruses, although dis-integrated, are not completely dead, because they can still direct the host machinery to make copies of the virus (Cowan & Smith, 2018 p.156). Viruses also do not exhibit emergent properties that arise from complex organization of nonliving things.

One example proposed by Scientific American explains how a neuron or a network or neurons cannot create the consciousness that we experience, it requires a “brain level complexity” to achieve consciousness. And further, a brain can be “biologically alive but incapable of consciousness (brain dead)” (Villarreal, 2004). A virus is the same way, it has a collection of organic molecules yet no emergent biological function without the host cell (Cowan & Smith, 2018 p.140-146). The virus may be “alive” but not carrying out its intended function on its own.

One interesting recent discovery in virology demonstrated a mamavirus that is large enough to be infected by another virus (Pearson, 2008). This gives another level of depth to the functions of a virus. It is possible for a virus to be large enough and have enough machinery for another virus to be dependent upon it; the virus has now become a host. Although this gives a level of complexity to the functions of a virus not previously understood, all viruses are still dependent upon a host. No virus is able to replicate itself separate from a host cell including the mamavirus (Pearson, 2008). This is the most definitive characteristic of viruses, and I believe the primary barrier to classification as alive.

Another piece of evidence that makes the categorization clear is that most of their biological processes cannot be done alone. For example, as people, although we are dependent upon peers and parents for most of our life, our natural biological processes, most fundamentally death, occur without the requirement of a host. Viruses exhibit many characteristics that make classifying their death difficult and this blurs the line for life. Although I believe that viruses are not fully alive, I am open to new research and discovery and am eager to be proved wrong if it means that we will know a little bit more about our world.

Discoveries in the Field of Virology. (2022, Jun 28). Retrieved from https://papersowl.com/examples/discoveries-in-the-field-of-virology/

The Importance of Discovering Ancient Viruses

Actor is a Profession of Endless Discoveries

Historical Events of the Era of Great Discoveries