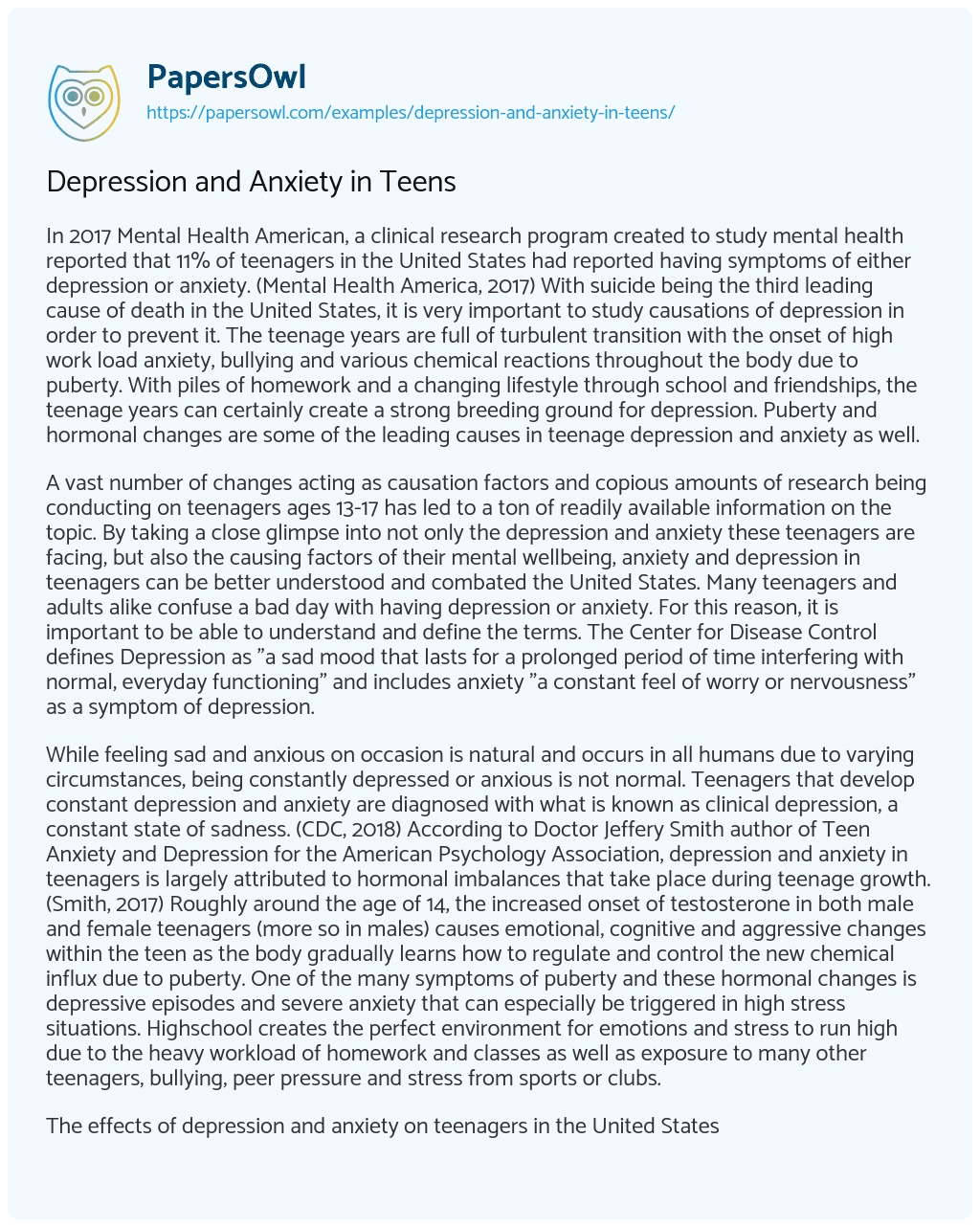 In 2017 Mental Health American, a clinical research program created to study mental health reported that 11% of teenagers in the United States had reported having symptoms of either depression or anxiety. (Mental Health America, 2017) With suicide being the third leading cause of death in the United States, it is very important to study causations of depression in order to prevent it. The teenage years are full of turbulent transition with the onset of high work load anxiety, bullying and various chemical reactions throughout the body due to puberty. With piles of homework and a changing lifestyle through school and friendships, the teenage years can certainly create a strong breeding ground for depression. Puberty and hormonal changes are some of the leading causes in teenage depression and anxiety as well.

A vast number of changes acting as causation factors and copious amounts of research being conducting on teenagers ages 13-17 has led to a ton of readily available information on the topic. By taking a close glimpse into not only the depression and anxiety these teenagers are facing, but also the causing factors of their mental wellbeing, anxiety and depression in teenagers can be better understood and combated the United States. Many teenagers and adults alike confuse a bad day with having depression or anxiety. For this reason, it is important to be able to understand and define the terms. The Center for Disease Control defines Depression as “a sad mood that lasts for a prolonged period of time interfering with normal, everyday functioning” and includes anxiety “a constant feel of worry or nervousness” as a symptom of depression.

While feeling sad and anxious on occasion is natural and occurs in all humans due to varying circumstances, being constantly depressed or anxious is not normal. Teenagers that develop constant depression and anxiety are diagnosed with what is known as clinical depression, a constant state of sadness. (CDC, 2018) According to Doctor Jeffery Smith author of Teen Anxiety and Depression for the American Psychology Association, depression and anxiety in teenagers is largely attributed to hormonal imbalances that take place during teenage growth. (Smith, 2017) Roughly around the age of 14, the increased onset of testosterone in both male and female teenagers (more so in males) causes emotional, cognitive and aggressive changes within the teen as the body gradually learns how to regulate and control the new chemical influx due to puberty. One of the many symptoms of puberty and these hormonal changes is depressive episodes and severe anxiety that can especially be triggered in high stress situations. Highschool creates the perfect environment for emotions and stress to run high due to the heavy workload of homework and classes as well as exposure to many other teenagers, bullying, peer pressure and stress from sports or clubs.

The effects of depression and anxiety on teenagers in the United States are as numerous as they are scary. Between 2008 and 2015, the teenage suicide rate in the United States has tripled as a result of depression. Puberty and a changing lifestyle for teenagers in high school exasperates depressive episodes as well as depression in teens. Another main reason as to why more than 1 in 10 teenagers experiencing depression is the lack of understanding and support for these teenagers to understand how to cope with the problem. High schools and parents alike should certainly take action to teach teenagers about depression, as well as how to cope with it. High school guidance counselor Jan Porter states that students often “don’t recognize their feelings of loneliness, inadequacy and regret let alone a general understanding of depression that should be taught in schools.” (Porter, 2016)

At her high school in Washington state, Porter works with teenagers one on one in her office to talk children through depressive episodes, explaining how it is natural in teenagers as well as that it is not permanent. School guidance counselors, parents, doctors and therapists can all aid in lowering depression and anxiety levels in teenagers across the country. Education on the topic as well as simply having someone to confide in and talk to is the first step to solving the problem. According to the United States National Library of Medicine and Health, over 70% of people diagnosed with clinical depression first experienced their symptoms between the ages of 13 and 17. In high school many teenagers are plagued with anxiety due to the stress of dealing with seven classes at once, after school homework, college entrance exams and weekly studying.

The overall effects of a high stress environment are not healthy for anyone, especially rapidly changing teens. Anxiety caused by excessive studying and working on school related materials can lead to clinical depression, eating disorders and post traumatic stress disorder. It is very rare for people to be born with clinical depression rather than acquiring it from a past experience typically occurring during their teenage years. Most teenagers suffering from depression and anxiety can pin point a moment in which they perceive their life as having begun to go downhill. Pinpointing the causation and origin of when a teenager first begun to experience depression is crucial to being able to talk about the problem to a therapist or school counselor in order to mentally move on with their lives rather than dwelling on the problem subconsciously. There are several other ways besides counseling that can help to eliminate feelings of anxiety and depression in teenagers. By leading a healthy balanced lifestyle as well as having a concerned adult to teach about depression, teenagers can have an educated view about their feelings, rather than an emotional one.

The Center for Disease Control recommends at least eight hours of sleep, three meals a day and adequate amounts of vitamin C to help combat depression in teenagers. In addition to anxiety, teenagers suffering from depression also feel as though they are alone or that they are going through their problems on their own. While it is just as important for adults to teach teenagers about depression, it is also important that teenagers are involved with one another through school sports and extracurricular activities such as scholar bowls or educational clubs as well. Human interaction is one of the simplest and most effective ways to combat depression, simply having a good time with one’s fellow peers has been proven to reduce the chemical norepinephrine. Norepinephrine is the chemical in our body that is released when we send stress signals to our brain. Laughing, talking to family and friends and being part of a group such as a sporting team has been proven to lead to lower levels of norepinephrine and higher levels of dopamine. Dopamine is a chemical our body creates in response to pleasure, a signifier of happiness, as well as our bodies way of rewarding ourselves. According to The Village Behavioral Health Foundation, Teenagers who report higher levels of social interactions with their peers, family and friends not only have less levels of depression and anxiety, but higher grades, higher levels of dopamine and less levels of norepinephrine. It is important for the symptoms of depression in teens to be recognized right away so that the reclusive and anti-social lifestyle that depression invites can be traded in for a more social and involved lifestyle that allows teenagers to make friends while staying active and happy. (Village Behavioral Health Foundation, 2018)

Bullying is another large contributor to depression and anxiety. Teenagers can be ruthless to other teens they deem outsiders due to mental health problems, introversion, heavy or low weight and a variety of other factors. The United States Offical website to prevent bullying known as StopBullying.Gov has warned of the side effects bullying has on teenagers. “An estimated 160,000 students skip school every day due to fear of verbal and physical bullying at the hands of their peers, while six out of ten teenagers state that they witness bullying in school daily.” (StopBullying.Gov, 2018) Students who are bullied typically become depressed and remove themselves from social interaction furthering their depression or become anxious about their appearance or actions. Students suffering from anxiety as a result of bullying may starve themselves if they were picked on for being fat or develop post traumatic stress disorder as a result of constant harassment. The vast majority of teenage suicides are a result of bullying that occurs at the high school level for teenagers.

In conclusion, there is a lot of reformation both in high school and at the family level that needs to take place in order to curb teenage depression and anxiety. While it is true that depressive episodes and anxiety occur naturally due to hormonal changes when teenagers undergo puberty, adults and teenagers alike must work harder with one another to help teenagers through the trials and tribulations that are the teenage years, especially during high school. High schools can do their part by cracking down on bullies, while parents can do their part to check on their teenagers for depressive behavior. Therapists and high school counselors across the country have been trained to deal with teenagers who experience depression and anxiety and are more than willing to help if only they are given the opportunity to do so by concerned parents. Research has shown that the more teenagers are able to accept one another and encourage one another to take part in extracurricular activities, the more likely teenagers who feel left out are to join a social group, increase their levels of dopamine and be a happier teenager over all. The more we all work together and accept one another for who we are rather than bullying those that stand out, the stronger our society ant national as a whole will become. I truly believe my generation can curb rising depression statistics and suicide rates if we all become more educated on the topic at hand.

Depression and Anxiety in Teens. (2020, Jan 02). Retrieved from https://papersowl.com/examples/depression-and-anxiety-in-teens/

Depression and Anxiety in Teenagers

A Problem of Anxiety Among Teens

What do we Know about Anxiety?