Considering a Career in Cryptocurrency 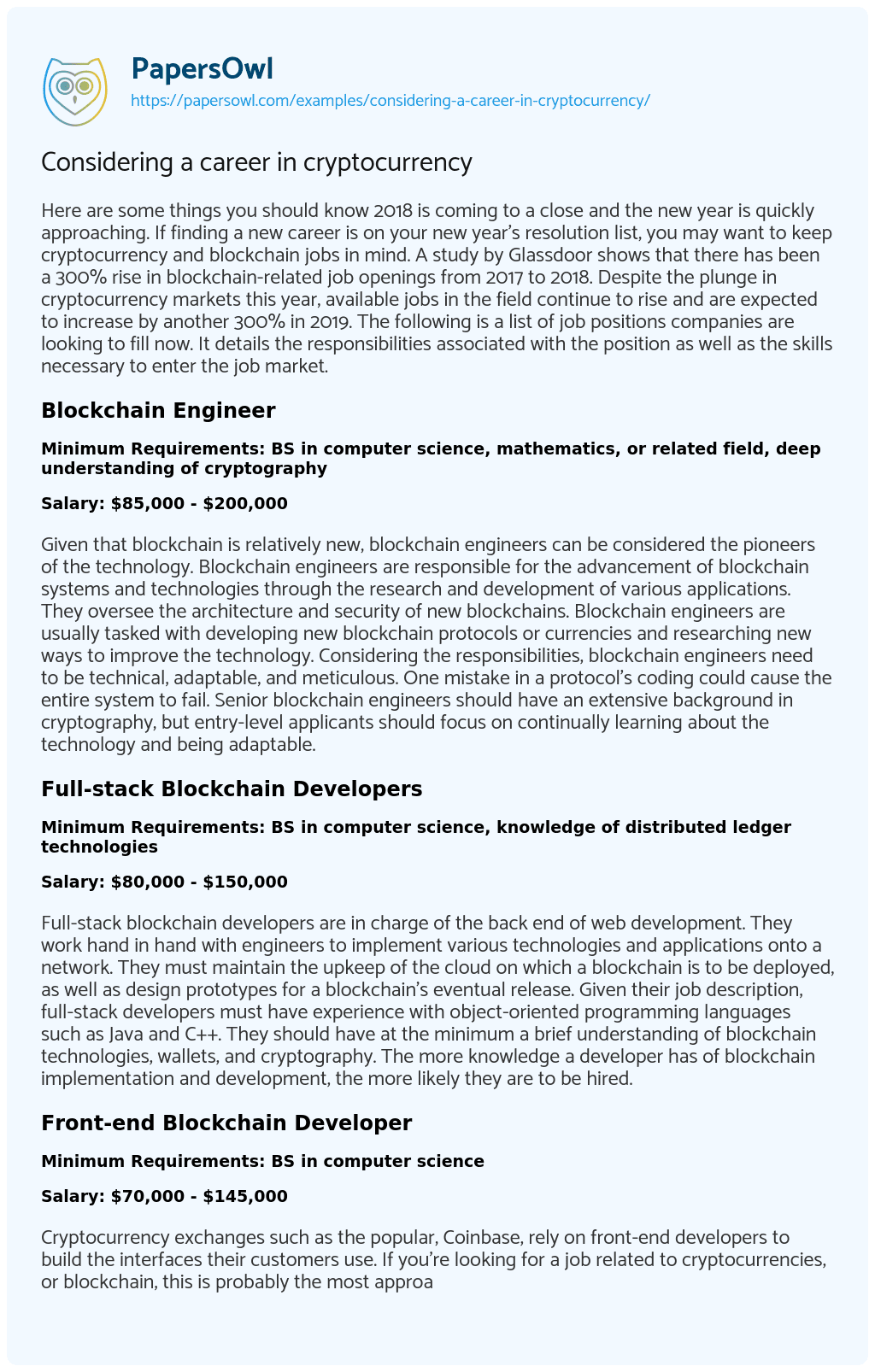 Here are some things you should know 2018 is coming to a close and the new year is quickly approaching. If finding a new career is on your new year’s resolution list, you may want to keep cryptocurrency and blockchain jobs in mind. A study by Glassdoor shows that there has been a 300% rise in blockchain-related job openings from 2017 to 2018. Despite the plunge in cryptocurrency markets this year, available jobs in the field continue to rise and are expected to increase by another 300% in 2019. The following is a list of job positions companies are looking to fill now. It details the responsibilities associated with the position as well as the skills necessary to enter the job market.

Full-stack blockchain developers are in charge of the back end of web development. They work hand in hand with engineers to implement various technologies and applications onto a network. They must maintain the upkeep of the cloud on which a blockchain is to be deployed, as well as design prototypes for a blockchain’s eventual release. Given their job description, full-stack developers must have experience with object-oriented programming languages such as Java and C++. They should have at the minimum a brief understanding of blockchain technologies, wallets, and cryptography. The more knowledge a developer has of blockchain implementation and development, the more likely they are to be hired.

Cryptocurrency exchanges such as the popular, Coinbase, rely on front-end developers to build the interfaces their customers use. If you’re looking for a job related to cryptocurrencies, or blockchain, this is probably the most approachable. Front-end developers exist in almost every industry. They are the people implementing the visual elements we see while interacting with an app, or browsing the web. Their responsibilities usually include, developing user-facing features, building code, optimizing applications for speed and scalability, and collaborating with various other front-end developers. Most cryptocurrency and blockchain companies are looking for a candidate who is proficient in various coding languages such as, javascript, react.js, CSS, and HTML.

Although the jobs listed here are focused more on the technical aspects of cryptocurrencies and blockchain technology, other positions related to business, marketing, and management are constantly made available. If you’re interested in a career in the industry but lack a computer science degree, there are still a variety of options to choose from.

Blockchain and cryptocurrencies continue to find uses across industries. At this time large companies such as IBM, Microsoft, Facebook, Visa, and Amazon Web Services (AWS) are all searching for talented engineers and developers with a passion for cryptocurrency and blockchain technologies. There are a wide variety of perks associated with blockchain and cryptocurrency jobs. For instance, the average salary for blockchain-related jobs is currently around $85,000, about 60% above the national average. Annual salaries can range between as low as $32,423, upwards of up to $223,667. Although about 50% of job openings are located in San Francisco and New York, most work is conducted on a computer, allowing the ability to work remotely. Most careers in cryptocurrency and the blockchain industry have been expanded off of programming jobs in the technology and financial sectors. A career in cryptocurrency and blockchain will not only provide a better salary but allow you to check off your resolution of transitioning into a new career in 2019.

Considering a career in cryptocurrency. (2020, May 07). Retrieved from https://papersowl.com/examples/considering-a-career-in-cryptocurrency/

Millennials and Cryptocurrency: are they Made for each other