Comparison between “Death of a Salesman”, “Oedipus Rex”, and “A Streetcar Named Desire” 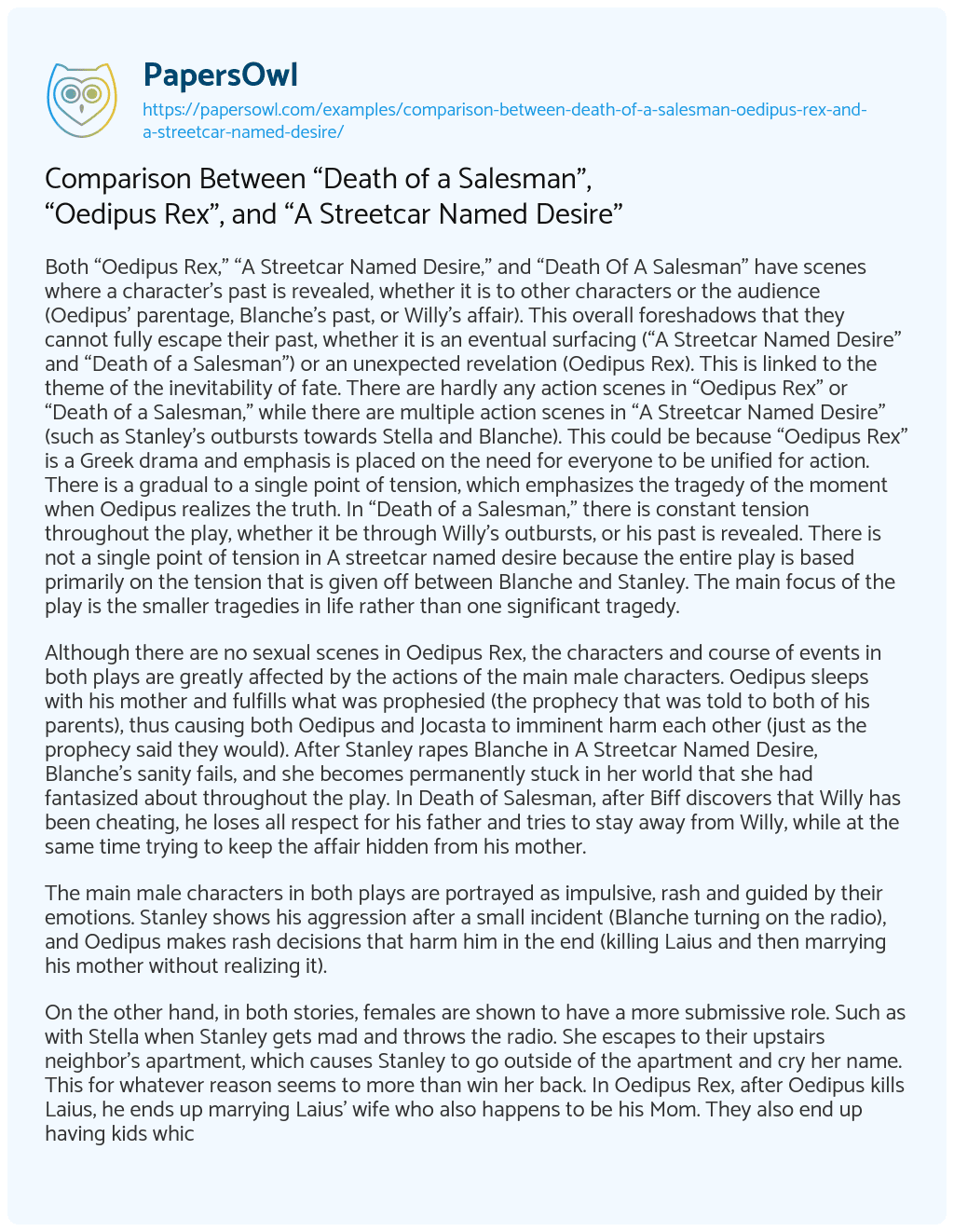 Both “Oedipus Rex,” “A Streetcar Named Desire,” and “Death Of A Salesman” have scenes where a character’s past is revealed, whether it is to other characters or the audience (Oedipus’ parentage, Blanche’s past, or Willy’s affair). This overall foreshadows that they cannot fully escape their past, whether it is an eventual surfacing (“A Streetcar Named Desire” and “Death of a Salesman”) or an unexpected revelation (Oedipus Rex). This is linked to the theme of the inevitability of fate. There are hardly any action scenes in “Oedipus Rex” or “Death of a Salesman,” while there are multiple action scenes in “A Streetcar Named Desire” (such as Stanley’s outbursts towards Stella and Blanche). This could be because “Oedipus Rex” is a Greek drama and emphasis is placed on the need for everyone to be unified for action. There is a gradual to a single point of tension, which emphasizes the tragedy of the moment when Oedipus realizes the truth. In “Death of a Salesman,” there is constant tension throughout the play, whether it be through Willy’s outbursts, or his past is revealed. There is not a single point of tension in A streetcar named desire because the entire play is based primarily on the tension that is given off between Blanche and Stanley. The main focus of the play is the smaller tragedies in life rather than one significant tragedy.

Although there are no sexual scenes in Oedipus Rex, the characters and course of events in both plays are greatly affected by the actions of the main male characters. Oedipus sleeps with his mother and fulfills what was prophesied (the prophecy that was told to both of his parents), thus causing both Oedipus and Jocasta to imminent harm each other (just as the prophecy said they would). After Stanley rapes Blanche in A Streetcar Named Desire, Blanche’s sanity fails, and she becomes permanently stuck in her world that she had fantasized about throughout the play. In Death of Salesman, after Biff discovers that Willy has been cheating, he loses all respect for his father and tries to stay away from Willy, while at the same time trying to keep the affair hidden from his mother.

The main male characters in both plays are portrayed as impulsive, rash and guided by their emotions. Stanley shows his aggression after a small incident (Blanche turning on the radio), and Oedipus makes rash decisions that harm him in the end (killing Laius and then marrying his mother without realizing it).

On the other hand, in both stories, females are shown to have a more submissive role. Such as with Stella when Stanley gets mad and throws the radio. She escapes to their upstairs neighbor’s apartment, which causes Stanley to go outside of the apartment and cry her name. This for whatever reason seems to more than win her back. In Oedipus Rex, after Oedipus kills Laius, he ends up marrying Laius’ wife who also happens to be his Mom. They also end up having kids which makes Oedipus a brother and father to his kids.

Blanche’s most significant tragic flaw is that she cannot move on from her past or adapt to reality. This especially shown closer to the end of the story when she talks about how there is a millionaire that’s going to help her get out of and away from Stella and Stanley. After Stanley rapes Blanche, her mind becomes trapped in her fantasy world, and she ends up being sent to the mental hospital.

In all stories, there is a family affair kind of debacle that takes place. In “Oedipus Rex,” that affair is when Oedipus marries his mother and then has children with her. In “A streetcar named desire,” that affair takes place when Stanley rapes Blanche, and in “death of a salesman” that moment happens when Biff finds out that Willy has been cheating on his wife with his mistress. In all stories, this holds utmost significance because Oedipus marrying his mother fulfilled the prophecy (which led to Oedipus and his mother dying). In “A Streetcar Named Desire,” it is significant because it led to Blanche becoming insane and becoming trapped in her little fantasy world that she had talked about the entire play. This then causes Stella to call a mental hospital who then takes Blache away. In “Death of a salesman, this is important because it leads to biff not studying for his math test, which leads to him failing it. That causes Biff to go to tell his father (Willy). As Biff goes to tell Willy, he finds that Willy had been cheating on their mother for a while. That then makes willy upset and causes him to become depressed and suicidal, which inevitably leads to his death.

Comparison Between Willy and Blanche

Both Willy Loman and Blanche are tragic figures who suffer from the effects of fantasies that are contained within their minds. Both of them struggle against a society which looks down on them for who they are, and what they have done. So, perhaps rather than focusing on the American Dream as a theme (which certainly exists for Willy) there may be more in common with the characters one of which being in the theme of Individual vs. Self. Throughout both plays, Willy and Blanche are both drawn back to their past. Blanche continually thinks that she is still wealthy, and living her dream life, and Willy being drawn back to the effects of his affair, and what led up to it.

Themes present in “Oedipus Rex” and “Death Of A Salesman.”

In terms of themes, the American dream is the central theme that is focused on “Death of a salesman.” Willy’s interpretation of the American dream is that an attractive and well-liked personality in business is the way to make more money to afford the comforts that modern day American life offers. However, his constant draw to the misleading qualities of likeability and attractiveness are at constant odds with a more rewarding and deep understanding of the American dream that recognizes hard work as completely necessary to success. His interpretation of being likable is superficial; for instance, he does not like Bernard because he sees him as a nerd. His implicit faith in the American dream causes him psychological distress to the point that he is unable to tell the difference between his past and his own current life, often getting them intertwined.

On the other hand, an important theme in “Oedipus Rex” is that it stresses the vulnerable nature that is contained in all human beings, and whose suffering is a result of several different factors including their actions. About Oedipus, we see that mistakes and tragedies can happen to anyone, that people are powerless against the gods or fate no matter what they do. At the end of the play when Oedipus is blind to the facts, the chorus points out that even the best of humanity cannot escape fate. Oedipus is seen as heroic in the way of his actions and respected for his desire to rid the city of the murderer (even though it is himself). His character suggests an individual of specific intellectual capabilities. Oedipus is noble as king of Thebes and respected in his desire to rid the city of the evil that has resulted in the plague. His intelligence is apparent when he can answer the Sphinx’s riddle. In scene 1, a group of priests comes to Oedipus the king asking for help against Thebes plague. Fortunately, given Oedipus quick nature in taking action, has already sent Creon to Delphi to ask the gods about the cause and the way forward. He comes with the news that the catastrophes befell Thebes is as a result of the murder of Laius, the former Thebe’s king. Oedipus vows to track down the killer and bring justice for the king’s murder. He makes this decision 100% unaware of the fact that he is the murderer. The second scene shows Oedipus searching for the truth. He seeks the help of Teressia, the blind seer. He is hesitant to reveal the truth for he is aware of the fact that it would lead to his downfall (Citation here. Quotation marks necessary for all text that is not your own). The tragedy happens because in regardless of such high standards, Oedipus unintentionally fulfills the prophecy according to the god and with that brought destruction upon himself

In both, their characters are willing to ignore the truth when it benefits them in some way. When both Oedipus and Jocasta begin getting closer to the truth concerning Laius’s murder, Oedipus is quick to clear his name. Neither of them feels it necessary to mention the coincidence in their prophecies. Jocasta tells Oedipus her story, about how she pierced and bound her son’s ankles and sent him away to be abandoned. However, she fails to think about Oedipus’ swollen ankles. While the conversation is largely meant to make the audience aware of the tragic irony, it also emphasizes the distress in Oedipus and Jocasta, and their unwillingness to realize the truth. They look at the reality of everyday life and ignore everything that is showing them the truth. On the same note, Willy’s view on the American dream leads to the eventual destruction of his mental barrier between reality and his imagination. At his old age, he has not yet made enough money to allow him to live the life that he is always wanted. His misconception that the American dream is solely based on a person’s attractiveness and likeability becomes his downfall. At the end of each day, he would find himself abandoned, unhappy and poor. Another instance, where Willy is willing to stay close-minded is when Linda comments on the fact that some mothers around their neighborhood fear Biff as a result of him being rough with their daughters. Willy becomes enraged by his son’s behavior, which causes him to yell at everyone to shut up.

Comparison Between “Death of a Salesman”, “Oedipus Rex”, and “A Streetcar Named Desire”. (2019, Aug 21). Retrieved from https://papersowl.com/examples/comparison-between-death-of-a-salesman-oedipus-rex-and-a-streetcar-named-desire/

The Symbol of Light in a Streetcar Named Desire

Essay about “A Streetcar Named Desire”

Symbolism in a Streetcar Named Desire