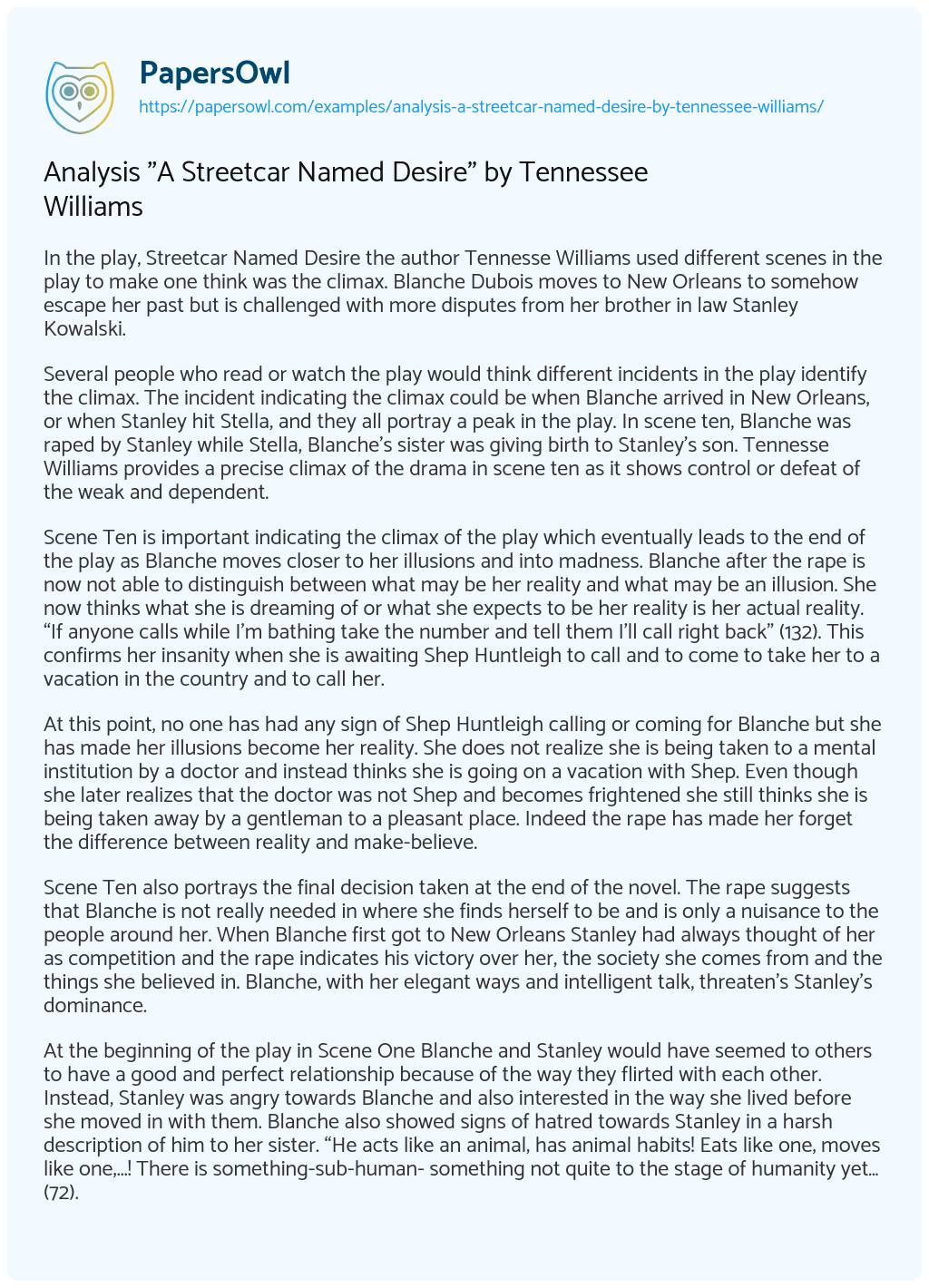 In the play, Streetcar Named Desire the author Tennesse Williams used different scenes in the play to make one think was the climax. Blanche Dubois moves to New Orleans to somehow escape her past but is challenged with more disputes from her brother in law Stanley Kowalski.

Several people who read or watch the play would think different incidents in the play identify the climax. The incident indicating the climax could be when Blanche arrived in New Orleans, or when Stanley hit Stella, and they all portray a peak in the play. In scene ten, Blanche was raped by Stanley while Stella, Blanche’s sister was giving birth to Stanley’s son. Tennesse Williams provides a precise climax of the drama in scene ten as it shows control or defeat of the weak and dependent.

Scene Ten is important indicating the climax of the play which eventually leads to the end of the play as Blanche moves closer to her illusions and into madness. Blanche after the rape is now not able to distinguish between what may be her reality and what may be an illusion. She now thinks what she is dreaming of or what she expects to be her reality is her actual reality. “If anyone calls while I’m bathing take the number and tell them I’ll call right back” (132). This confirms her insanity when she is awaiting Shep Huntleigh to call and to come to take her to a vacation in the country and to call her.

At this point, no one has had any sign of Shep Huntleigh calling or coming for Blanche but she has made her illusions become her reality. She does not realize she is being taken to a mental institution by a doctor and instead thinks she is going on a vacation with Shep. Even though she later realizes that the doctor was not Shep and becomes frightened she still thinks she is being taken away by a gentleman to a pleasant place. Indeed the rape has made her forget the difference between reality and make-believe.

Scene Ten also portrays the final decision taken at the end of the novel. The rape suggests that Blanche is not really needed in where she finds herself to be and is only a nuisance to the people around her. When Blanche first got to New Orleans Stanley had always thought of her as competition and the rape indicates his victory over her, the society she comes from and the things she believed in. Blanche, with her elegant ways and intelligent talk, threaten’s Stanley’s dominance.

At the beginning of the play in Scene One Blanche and Stanley would have seemed to others to have a good and perfect relationship because of the way they flirted with each other. Instead, Stanley was angry towards Blanche and also interested in the way she lived before she moved in with them. Blanche also showed signs of hatred towards Stanley in a harsh description of him to her sister. “He acts like an animal, has animal habits! Eats like one, moves like one,…! There is something-sub-human- something not quite to the stage of humanity yet… (72).

The Symbol of Light in a Streetcar Named Desire

Essay about “A Streetcar Named Desire”