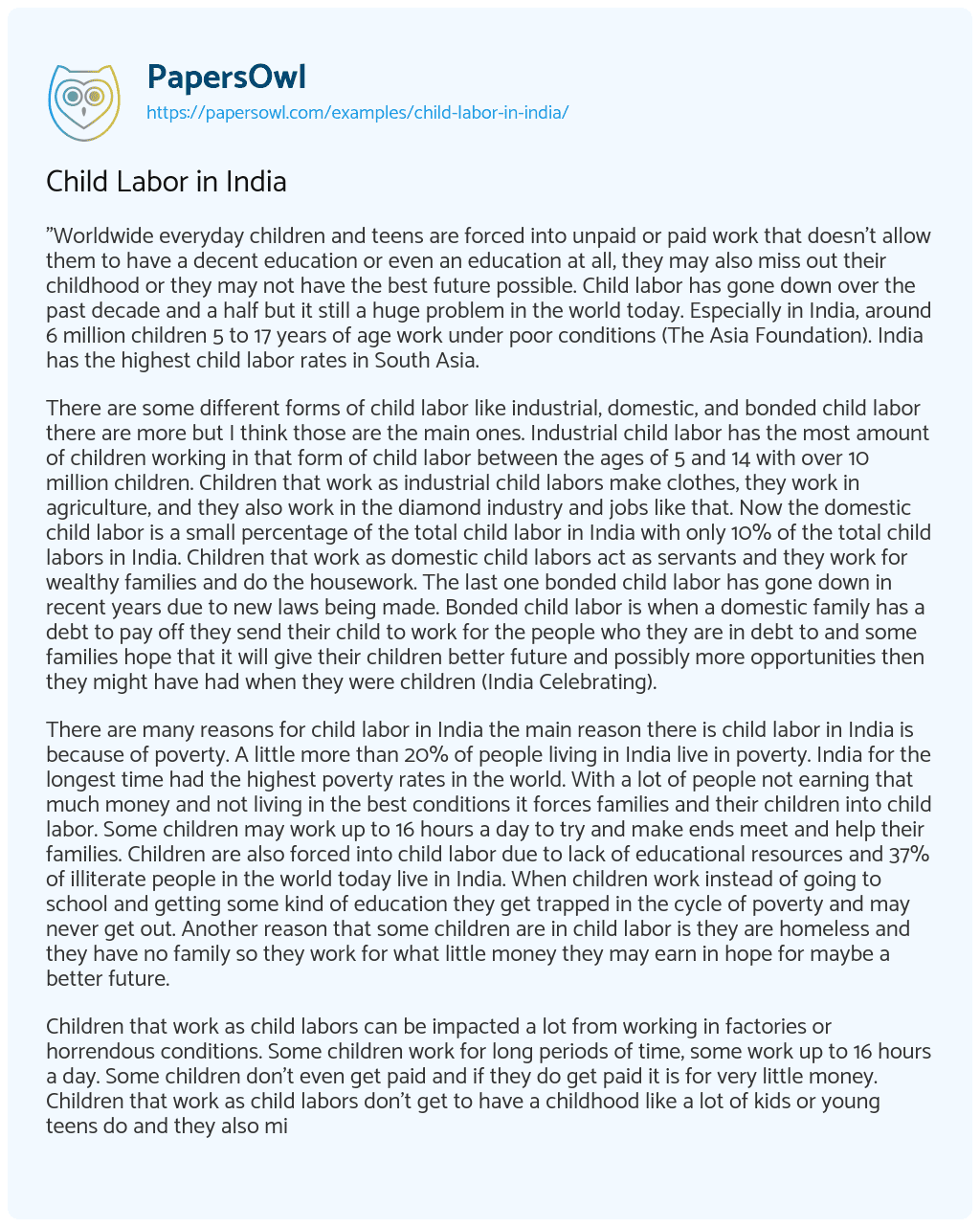 “Worldwide everyday children and teens are forced into unpaid or paid work that doesn’t allow them to have a decent education or even an education at all, they may also miss out their childhood or they may not have the best future possible. Child labor has gone down over the past decade and a half but it still a huge problem in the world today. Especially in India, around 6 million children 5 to 17 years of age work under poor conditions (The Asia Foundation). India has the highest child labor rates in South Asia.

There are many reasons for child labor in India the main reason there is child labor in India is because of poverty. A little more than 20% of people living in India live in poverty. India for the longest time had the highest poverty rates in the world. With a lot of people not earning that much money and not living in the best conditions it forces families and their children into child labor. Some children may work up to 16 hours a day to try and make ends meet and help their families. Children are also forced into child labor due to lack of educational resources and 37% of illiterate people in the world today live in India. When children work instead of going to school and getting some kind of education they get trapped in the cycle of poverty and may never get out. Another reason that some children are in child labor is they are homeless and they have no family so they work for what little money they may earn in hope for maybe a better future.

Children that work as child labors can be impacted a lot from working in factories or horrendous conditions. Some children work for long periods of time, some work up to 16 hours a day. Some children don’t even get paid and if they do get paid it is for very little money. Children that work as child labors don’t get to have a childhood like a lot of kids or young teens do and they also might not have the best future. Child labors also don’t live in the best conditions which is not good for their health.

India has one of the world’s largest economies, but despite having so much wealth they have one of the highest poverty rates in the world. In India child labor is found in areas with high poverty rates such as urban areas and rural areas. Child labor is illegal in many countries but it is not completely illegal in India. India has some certain laws pertaining to child labor like children under the age of 14 should not be working in hazardous conditions but there are many children that do work in hazardous conditions and people get away with letting the children under 14 work in hazardous conditions because it is mostly in villages where the government doesn’t notice as much.

People are trying to get new laws to be enforced about child labor. It is becoming very common that when a child of young teen when they come home from school and help their father on the farm or they family may have a business and they have to help their family run the business that type of child labor should not be punished. More people are taking initiative to try and stop the numbers of child labors from going up and they are trying to get the numbers down, which in the past few years the numbers are going down not that much but they are going down. Child labor has become common in areas with high poverty rates and India has the highest poverty rates along with the highest child labor rates in the world.

Another bad thing when children work as child labors they may often work in sex trade. Which could lead to some bad of dangerous things for some of those children. It may lead to sex trafficking and almost always does. It may also lead to human trafficking, just all in all is a very dangerous thing and not good for children and when they go into this kind of work like sex trade it deprives children of happiness and things like that and possibly even a future because it is not good when you go into something like that.”

Global Issue of the Child Labor on the Example of India