Can Non White People be Racist or Not? 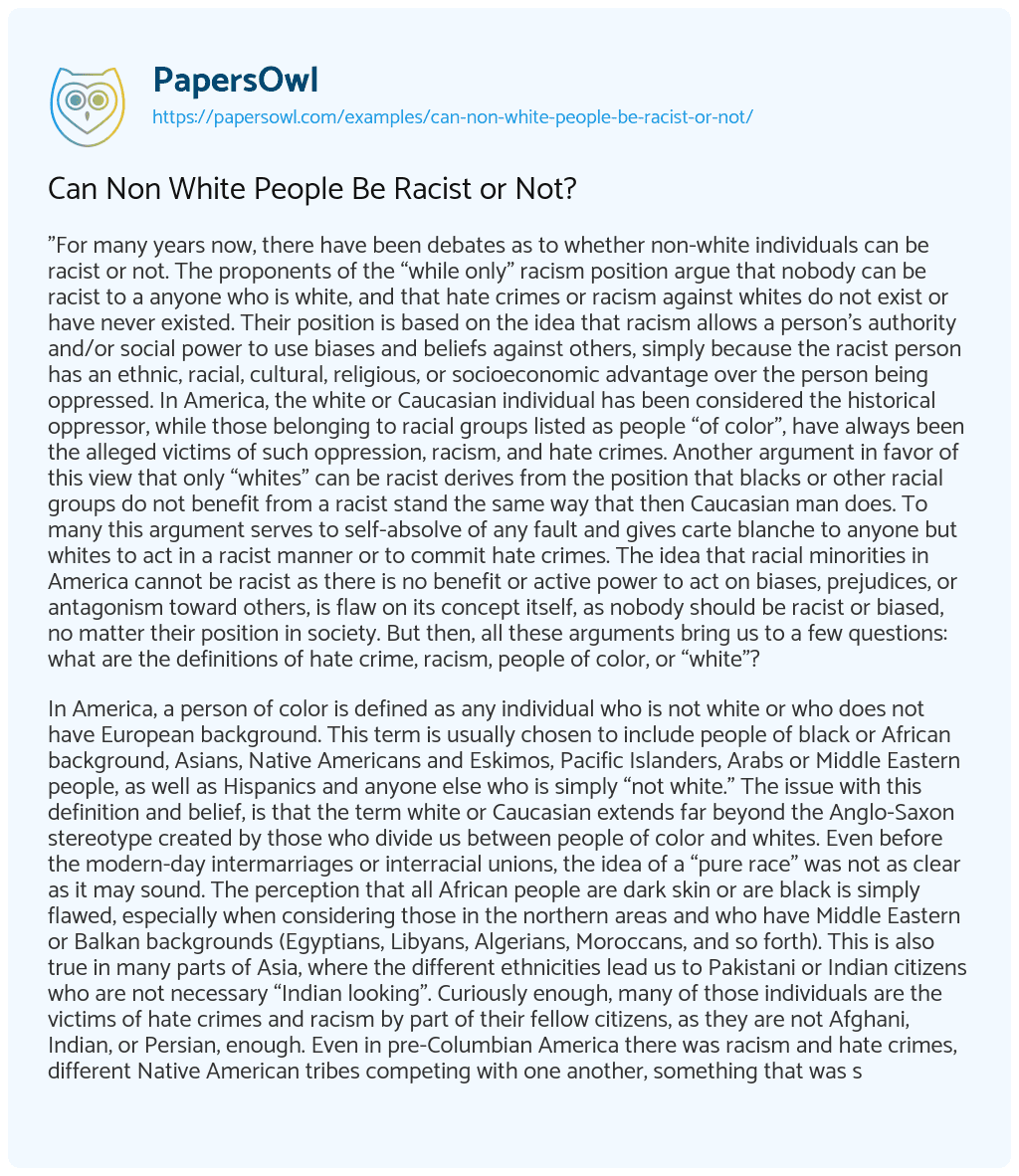 “For many years now, there have been debates as to whether non-white individuals can be racist or not. The proponents of the “while only” racism position argue that nobody can be racist to a anyone who is white, and that hate crimes or racism against whites do not exist or have never existed. Their position is based on the idea that racism allows a person’s authority and/or social power to use biases and beliefs against others, simply because the racist person has an ethnic, racial, cultural, religious, or socioeconomic advantage over the person being oppressed. In America, the white or Caucasian individual has been considered the historical oppressor, while those belonging to racial groups listed as people “of color”, have always been the alleged victims of such oppression, racism, and hate crimes. Another argument in favor of this view that only “whites” can be racist derives from the position that blacks or other racial groups do not benefit from a racist stand the same way that then Caucasian man does. To many this argument serves to self-absolve of any fault and gives carte blanche to anyone but whites to act in a racist manner or to commit hate crimes. The idea that racial minorities in America cannot be racist as there is no benefit or active power to act on biases, prejudices, or antagonism toward others, is flaw on its concept itself, as nobody should be racist or biased, no matter their position in society. But then, all these arguments bring us to a few questions: what are the definitions of hate crime, racism, people of color, or “white”?

In America, a person of color is defined as any individual who is not white or who does not have European background. This term is usually chosen to include people of black or African background, Asians, Native Americans and Eskimos, Pacific Islanders, Arabs or Middle Eastern people, as well as Hispanics and anyone else who is simply “not white.” The issue with this definition and belief, is that the term white or Caucasian extends far beyond the Anglo-Saxon stereotype created by those who divide us between people of color and whites. Even before the modern-day intermarriages or interracial unions, the idea of a “pure race” was not as clear as it may sound. The perception that all African people are dark skin or are black is simply flawed, especially when considering those in the northern areas and who have Middle Eastern or Balkan backgrounds (Egyptians, Libyans, Algerians, Moroccans, and so forth). This is also true in many parts of Asia, where the different ethnicities lead us to Pakistani or Indian citizens who are not necessary “Indian looking”. Curiously enough, many of those individuals are the victims of hate crimes and racism by part of their fellow citizens, as they are not Afghani, Indian, or Persian, enough. Even in pre-Columbian America there was racism and hate crimes, different Native American tribes competing with one another, something that was seen not only in North America, but also in the Caribbean and South America, long before the “oppressor white man” came to these shores. Racial and ethnic divide is not a problem of contemporary America but has been ingrained in the history of the world, mostly due to socioeconomic needs and wants, which have led nations to fight one another, and the victors to proclaim themselves racially, morally, and socially superior.

The reality is that racism is a problem that affects the individual, not the institution itself. All individuals have the ability to hurt another, and everyone has the ability to possess bias, be prejudiced against others, and have an antagonistic behavior toward other people, no matter their race or background. Prejudices, or the preconceived beliefs and opinions of others, are usually not based on reason or real experiences, but on cultural and social ideas about others. These beliefs are pre-judgements that people make about others and which do not originate on personal experiences. Some prejudices can be positive, although many of them tend to be negative, especially when related to race, religion, or ethnic backgrounds. Even though prejudices can have racial undertones, they do not always impact people as negatively as racism does. Racism, on the other hand, beliefs that particular races are equated with certain traits, making some races superior or better than others. This position results in an unequal distribution of authority and power, which is based solely on the superiority of a race or culture/ethnicity.

Hate crimes usually originate out of racism and prejudices but take place on all sides of the racial spectrum. Hate crimes are usually defined as criminal offenses against certain individuals or their property which are motivated, either totally or partially, by the offender’s bias against a particular race, disability, gender, sexual orientation, religion, or other protected class. Some examples of hate crimes might include physical or psychological abuse, as well arson, vandalism, and even murder, as long as there is an element of bias in the crime. Under certain laws, for an action to be considered a hate crime, certain elements need to be present. One of these elements is the victim’s protected class or characteristic. When an offender targets a victim because of the latter’s race, national origin, religion, sexual orientation, disability, or other protected class, a hate crime has taken place. The offender’s intent is also taken into consideration, especially when it relates to intimidate or hurt the victim, and/or damage the victim’s possessions. There are times when the offender’s actions are considered a form of assault or battery upon the victim and may lead to damage to the victim’s property. Hate crime perpetrators are usually pressed with criminal charges, although in some cases there is also the ability for them to be prosecuted in a civil court.

The 2017 Chicago torture incident was a clear example of a hate crime which involved prejudice, and racism, as the offenders were biased against the individual’s racial background, while taking advantage of the victim’s disability in order to abuse him. While law enforcement had initially concluded that the victim had been chosen due to his disability status and the possibility of his family being extorted, later charges resulted from both the offenders’ use of racially charged language and their references as to the victim’s disability. While law enforcement never questioned the incident being a hate crime, investigations were done based on facts, not human emotion. The volatility of the case increased racial and political tensions in the Chicago area, with both left- and right-wing groups making statements about the “real nature” of the incident. Although most hate crimes can be connected to the victim’s race, the State of Illinois also presses charges in cases where the victim suffers from a mental disability, especially if this leads to an attack or abuse. In addition to the hate crime charges, all four offenders were charged with kidnapping, aggravated unlawful restraint, and aggravated battery. Three of the perpetrators were charged with burglary as well. The State of Illinois considers hate crimes class 4 felonies, which carry sentences of one to three years in prison. The kidnapping charges call for sentences of three to seven years in prison, although aggravated kidnapping sometimes leads to six to 30 years. In this case, all the perpetrators received appropriate charges, although the sentences on some of them were fairly lenient (one of the sisters received probation, and the other one had a reduced sentence, based on time served in the county jail). This incident is one in which the offenders should have been made an example of, due to the heinous nature of their crime, and their complete disregard for the victim’s physical and psychological wellbeing.

There is no doubt that the Chicago kidnapping case inolved racism and should be considered a hate crime. No matter the actual or real reason for the kidnapping, the offenders used language agaist his race and background, and took advantange of his mental health disorders. While political correctness stopped the media and many public figures from using the words racism or hate crime during the reporting of this indicident, the reality is that in order for it to be condemned the reality had to be told. Discrimination and torture against any individual, no matter the racial or ethnic background, if based on race, should be considered racism. Prejudices and biases are not owned by a particular racial group or culture, but are behaviors that can be learnt and developed, and which can affect any member of society. Nobody should be able to hide behind the assumption that certain groups or races are immune to racist behaviors or biased actions. Even though comparisons between historical facts and modern scenarios can lead to uncomfortable situations, by calling behaviors and actions by what they really are, we are helping in destroying stereotypes and biases, and are promoting a better society, and a safer environment, for all.”

Can Non White People Be Racist or Not?. (2021, Jun 16). Retrieved from https://papersowl.com/examples/can-non-white-people-be-racist-or-not/

What does it Mean to be a Subtle Racist?