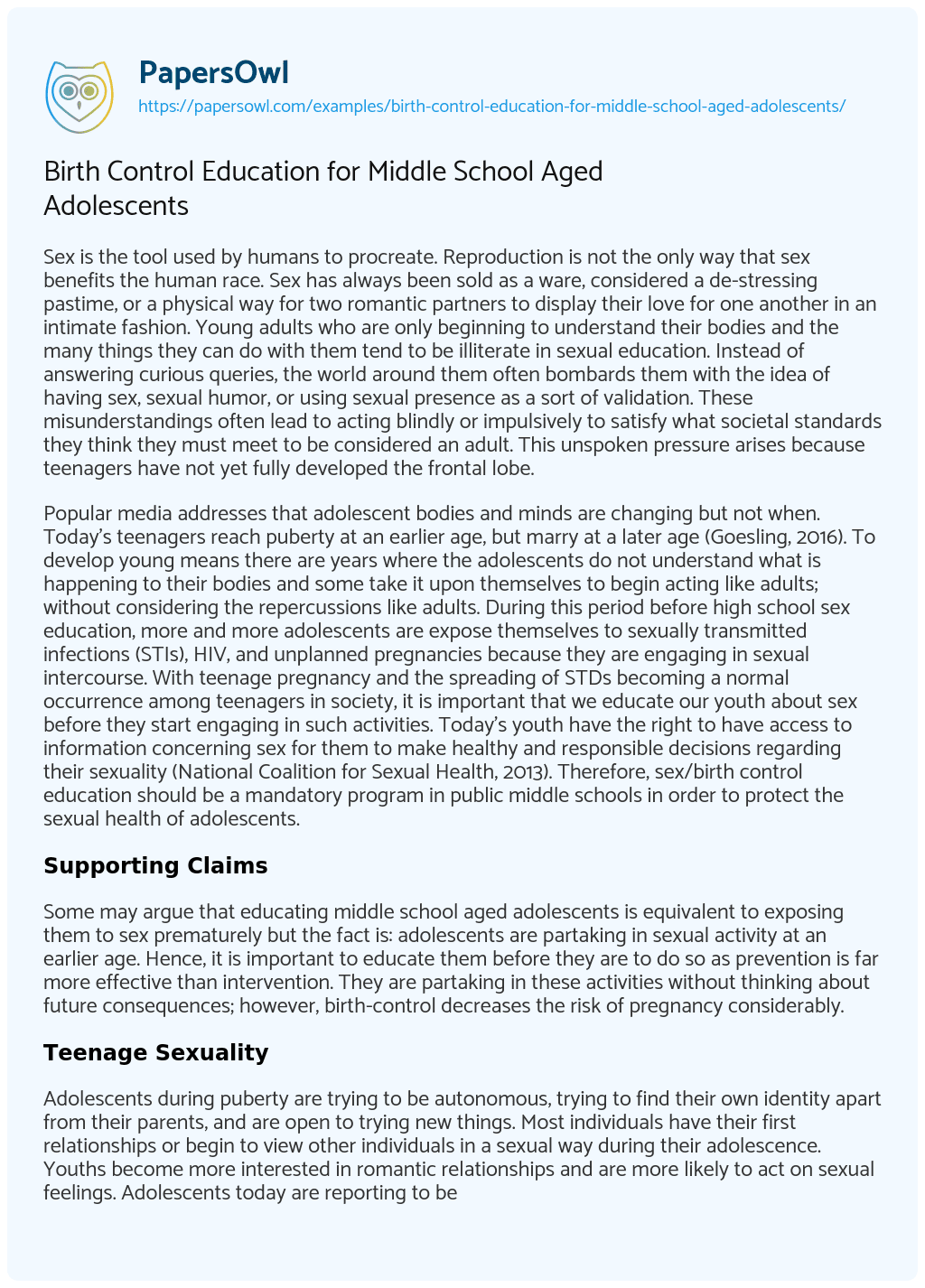 Sex is the tool used by humans to procreate. Reproduction is not the only way that sex benefits the human race. Sex has always been sold as a ware, considered a de-stressing pastime, or a physical way for two romantic partners to display their love for one another in an intimate fashion. Young adults who are only beginning to understand their bodies and the many things they can do with them tend to be illiterate in sexual education. Instead of answering curious queries, the world around them often bombards them with the idea of having sex, sexual humor, or using sexual presence as a sort of validation. These misunderstandings often lead to acting blindly or impulsively to satisfy what societal standards they think they must meet to be considered an adult. This unspoken pressure arises because teenagers have not yet fully developed the frontal lobe.

Popular media addresses that adolescent bodies and minds are changing but not when. Today’s teenagers reach puberty at an earlier age, but marry at a later age (Goesling, 2016). To develop young means there are years where the adolescents do not understand what is happening to their bodies and some take it upon themselves to begin acting like adults; without considering the repercussions like adults. During this period before high school sex education, more and more adolescents are expose themselves to sexually transmitted infections (STIs), HIV, and unplanned pregnancies because they are engaging in sexual intercourse. With teenage pregnancy and the spreading of STDs becoming a normal occurrence among teenagers in society, it is important that we educate our youth about sex before they start engaging in such activities. Today’s youth have the right to have access to information concerning sex for them to make healthy and responsible decisions regarding their sexuality (National Coalition for Sexual Health, 2013). Therefore, sex/birth control education should be a mandatory program in public middle schools in order to protect the sexual health of adolescents.

Some may argue that educating middle school aged adolescents is equivalent to exposing them to sex prematurely but the fact is: adolescents are partaking in sexual activity at an earlier age. Hence, it is important to educate them before they are to do so as prevention is far more effective than intervention. They are partaking in these activities without thinking about future consequences; however, birth-control decreases the risk of pregnancy considerably.

Adolescents during puberty are trying to be autonomous, trying to find their own identity apart from their parents, and are open to trying new things. Most individuals have their first relationships or begin to view other individuals in a sexual way during their adolescence. Youths become more interested in romantic relationships and are more likely to act on sexual feelings. Adolescents today are reporting to be engaging in sexual behavior at an earlier age, often before they are aware or are ready to deal with the different potential outcomes (Goesling, 2016). According to a study done in Houston, Texas public schools, 11% of 6th graders, 15% of 7th graders, 18% of 8th graders, and 33% of 9th graders report engaging in sexual activity (Goesling, 2016). By 9th grade, one third of students are engaging in sexual activity. The instantaneous growth of sexual behavior between 8th and 9th graders demonstrates that earlier extensive education is imperative.

Without proper knowledge, many students are putting their health at risk. In a study done in Chicago Public School, 16% of high school students report having more than four or more sexual partners, and 39% report not using a condom on the most recent sexual encounter (Baumler et. al, 2012). These actions are not safe for any individuals of any age. Having with multiple partners and unprotected sex puts these kids at an increased risk for earlier and unknown pregnancy and well as contacting STD’s and STI’s. Young adults and adolescents ages 13 through 29 years old account for 39% of new HIV infections in 2009, especially in the United States Southeast region (Lightfoot, 2015). Adolescents do not know what they are risking for the transient pleasure of sex because they lack the foresight. Being an adult does not instantaneously equip one with the capacity to handle certain issues, it is highly unlikely that adolescents would fare any better with their still developing minds and bodies. Sex without a condom can lead to STDs/ STIs that can plague an individual for the rest of their lives. These long-term consequences are what creates the imperative to start educating them on contraceptives before the high school to ensure they are well knowledgeable partaking in these risky behaviors.

Use of Birth Control and Parents

The use of birth control has been proven to effective amongst all spectrums of the female population, especially the teenage population. With the use of birth control teenage pregnancy in the United States has declined to which lowest in recent years. Between the years of 1990 and 2010, the rate of pregnancy has decreased from 116.9 pregnancies per 1000 women younger than 18 to 57.4 per 1000 women, which is 51% decrease (Planned Parenthood). Having access to birth control options has led to the steady decline in unplanned teenage pregnancies can be attributed to the use of proper use of contraceptives (Planned Parenthood).

However, many students are having problems accessing these birth control options or are ignorant how to use them. Who should be teaching them? Who should be giving them access to these materials? Studies show that many adolescents prefer to learn how to use contraceptives and access these materials with the help of their parents (National Coalition for Sexual Health, 2013). However, there is a major problem with this thought. Many students are not educated about sex by their parents/guardians. Parents often express a cognitive dissonance in educating their children about sex and this reserved ness often leads to children not having proper introductions to sex and instead inducted into the adult world by media and their peers. The intimate conversation about self-esteem, self-validation, and sexual conduct are often delegated to schools or the one child who is excited to explain the origin of babies. These students have a problem accessing proper birth control and contraceptives when they become sexually active, so they often go without them. Children are then far likelier to contact diseases as adults for which there are no cures or in turn, have children that they will be reluctant to educate about sex.

Some critics still argue that education is encouragement rather than a deterrent for adolescents engaging in sex. They contend that teaching children in a school setting means that more children become curious about sex at the same time and encourages sex within the adolescent community. Out of sight means out of mind. For schools to consider it their role to teach children about sex is problematic in the sense that parents cannot monitor how their children learn about sex and that a public education about a private matter can prove to be inadequate.

Many opponents of birth control/safe sex education will say that we need to be teaching adolescents about abstinence, instead of encouraging them to have sex through giving them access to birth control and contraceptives. They claim that abstinence is the only contraceptive methods that provide protection from both HIV/STIs and pregnancy (Lightfoot, 2015). Although this argument is true, it completely ignores the discussion at hand. Adolescents are keen to engage in sexual intercourse regardless if society wants them to or not. It is not society’s choice, but their own choice. Also, research has shown that abstinence only programs are ineffective in reducing STIs, delaying age of first sexual experience, or reducing teenage pregnancy (Lightfoot, 2015). Abstinence only programs are not and will not be effective because they do not address the key issues in teenage sexuality. Kids are curious about sex, and by not telling them about sex is simply not going to prevent them from having sex.

Other opponents might say that the schools are not the place for sexual education and that schools have no right to interfere in affairs of the bedroom (Blonigen, 2016). They believe it is the parents/guradians’ responsibility to discuss sexual topics with their children. However, as discussed in a previous section, many parents are not doing their kids justice and teaching them about sexual intercourse before they reach an age of curiosity. In one study, one half of adolescents 15-17-year olds report that they have never discussed sex or anything about sexual decision making with their parents. One in three 12-17-year olds report that they would like more information about sexual health to come from their parents (National Coalition for Sexual Health, 2013). Studies have also proven that most parents who do discuss sex with their children take an abstinence-based approach when communicating with their children about sex, often without discussing other important topics such as contraception and HIV/STDs prevention (National Coalition for Sexual Health, 2013). Although they were once young, many parents do not want to imagine or hear about their children engaging in sexual intercourse, resulting in many adolescents lying and having sex without their parents’ knowledge or approval.

This problem can potentially increase the possibility of their kids being misled by other students and pop culture. If the parents are not willing to be primary educators about sex or are not willing properly educate their children about sex, then it is up to and better for the school to take on the responsibility and educate the students about sexual topics as a primary educational source instead of the media.

Birth control education is very important for the well-being of our future generations. Our society needs strive for the youth to be healthy, especially sexually healthy. By being sexually healthy, adolescents will able to have healthy bodies, have satisfying sexual lives, have positive relationships with those around them, as well as have peace of mind (National Coalition for Sexual Health, 2013.) Many of these students are beginning to engage in sexual activity at younger and younger ages and it is imperative that they understand the magnitude of the activities that they are partaking in. Without proper education, many of these adolescents are put at increasing rates of teenage pregnancy and of acquiring a sexually communicated diseases. The future of our country runs parallel to the future of the youth. It is imperative that they move forward not worrying over things that can easily be prevented by education.

Sex Education for Children and Adolescents

Importance of Sex Education for Teenagers

Comprehensive Sex Education should be Mandatory in U.S Public Schools