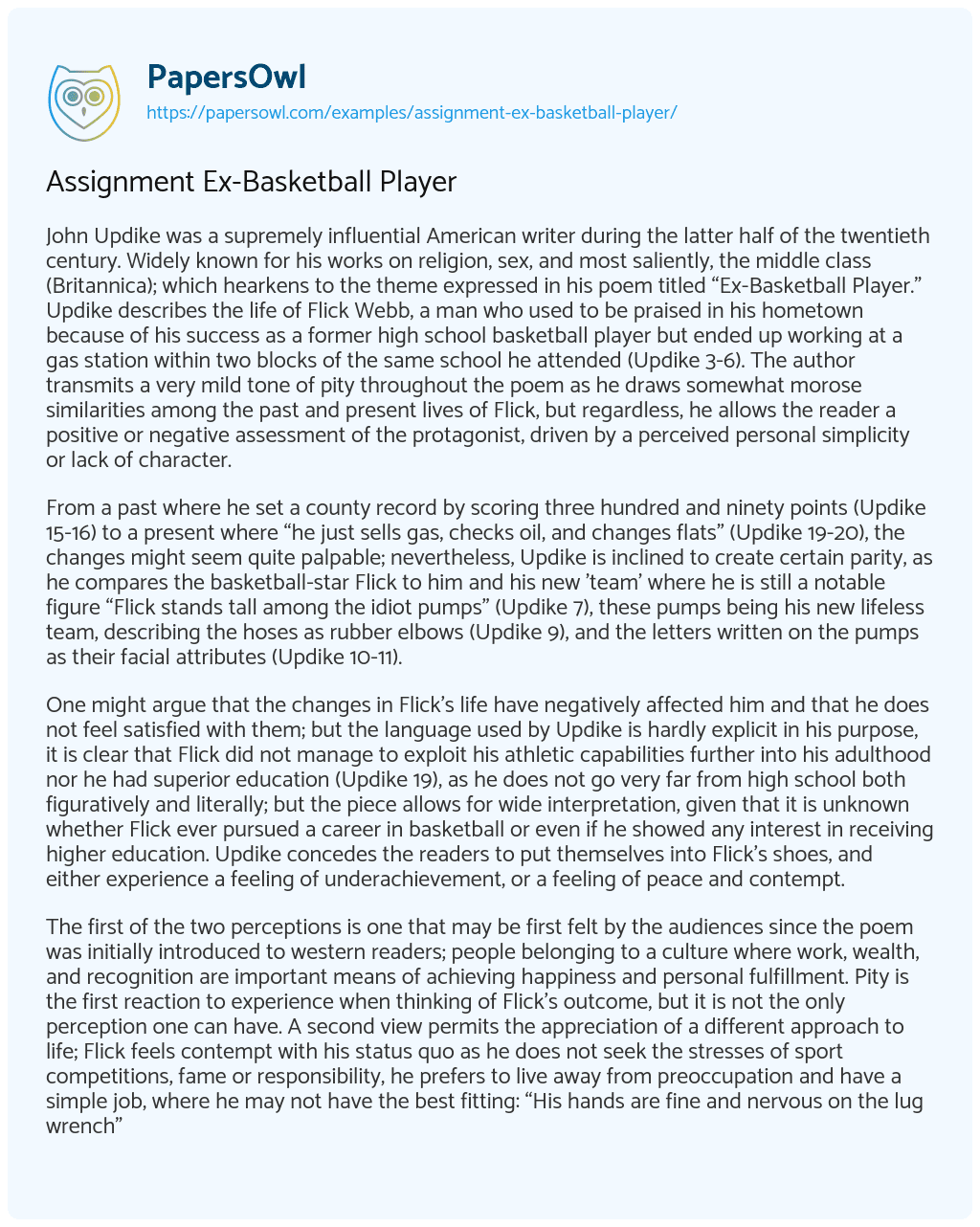 John Updike was a supremely influential American writer during the latter half of the twentieth century. Widely known for his works on religion, sex, and most saliently, the middle class (Britannica); which hearkens to the theme expressed in his poem titled “Ex-Basketball Player.” Updike describes the life of Flick Webb, a man who used to be praised in his hometown because of his success as a former high school basketball player but ended up working at a gas station within two blocks of the same school he attended (Updike 3-6). The author transmits a very mild tone of pity throughout the poem as he draws somewhat morose similarities among the past and present lives of Flick, but regardless, he allows the reader a positive or negative assessment of the protagonist, driven by a perceived personal simplicity or lack of character.

From a past where he set a county record by scoring three hundred and ninety points (Updike 15-16) to a present where “he just sells gas, checks oil, and changes flats” (Updike 19-20), the changes might seem quite palpable; nevertheless, Updike is inclined to create certain parity, as he compares the basketball-star Flick to him and his new ‘team’ where he is still a notable figure “Flick stands tall among the idiot pumps” (Updike 7), these pumps being his new lifeless team, describing the hoses as rubber elbows (Updike 9), and the letters written on the pumps as their facial attributes (Updike 10-11).

One might argue that the changes in Flick’s life have negatively affected him and that he does not feel satisfied with them; but the language used by Updike is hardly explicit in his purpose, it is clear that Flick did not manage to exploit his athletic capabilities further into his adulthood nor he had superior education (Updike 19), as he does not go very far from high school both figuratively and literally; but the piece allows for wide interpretation, given that it is unknown whether Flick ever pursued a career in basketball or even if he showed any interest in receiving higher education. Updike concedes the readers to put themselves into Flick’s shoes, and either experience a feeling of underachievement, or a feeling of peace and contempt.

The first of the two perceptions is one that may be first felt by the audiences since the poem was initially introduced to western readers; people belonging to a culture where work, wealth, and recognition are important means of achieving happiness and personal fulfillment. Pity is the first reaction to experience when thinking of Flick’s outcome, but it is not the only perception one can have. A second view permits the appreciation of a different approach to life; Flick feels contempt with his status quo as he does not seek the stresses of sport competitions, fame or responsibility, he prefers to live away from preoccupation and have a simple job, where he may not have the best fitting: “His hands are fine and nervous on the lug wrench” (Updike 23), but notwithstanding the repercussions are minimal, if any: “It makes no difference to the lug wrench, though” (Updike 24).

“Ex-Basketball player” is a piece that draws an image of the average American, where hopes and dreams may not come to fruition as adulthood begins, or these simply shift to simpler, more tranquil life expectations; but it depends on the beholder to either pity the mediocrity or admire the simplicities of everyday life.

The Effects of Self-Talk on a Basketball Player’s Performance

Why People Love to Play Basketball?