Are Violent Video Games Good or Bad for You? 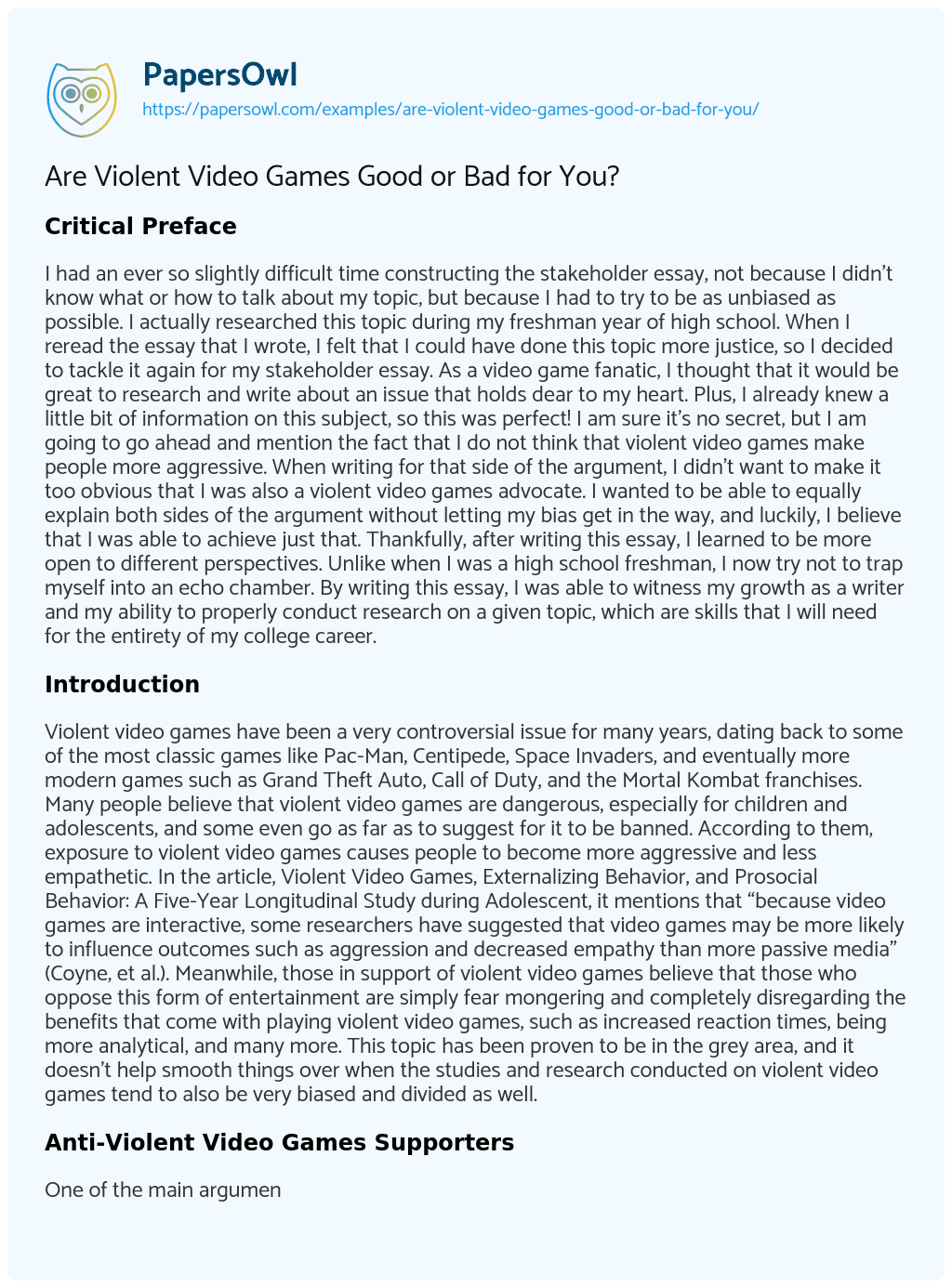 I had an ever so slightly difficult time constructing the stakeholder essay, not because I didn’t know what or how to talk about my topic, but because I had to try to be as unbiased as possible. I actually researched this topic during my freshman year of high school. When I reread the essay that I wrote, I felt that I could have done this topic more justice, so I decided to tackle it again for my stakeholder essay. As a video game fanatic, I thought that it would be great to research and write about an issue that holds dear to my heart. Plus, I already knew a little bit of information on this subject, so this was perfect! I am sure it’s no secret, but I am going to go ahead and mention the fact that I do not think that violent video games make people more aggressive. When writing for that side of the argument, I didn’t want to make it too obvious that I was also a violent video games advocate. I wanted to be able to equally explain both sides of the argument without letting my bias get in the way, and luckily, I believe that I was able to achieve just that. Thankfully, after writing this essay, I learned to be more open to different perspectives. Unlike when I was a high school freshman, I now try not to trap myself into an echo chamber. By writing this essay, I was able to witness my growth as a writer and my ability to properly conduct research on a given topic, which are skills that I will need for the entirety of my college career.

Violent video games have been a very controversial issue for many years, dating back to some of the most classic games like Pac-Man, Centipede, Space Invaders, and eventually more modern games such as Grand Theft Auto, Call of Duty, and the Mortal Kombat franchises. Many people believe that violent video games are dangerous, especially for children and adolescents, and some even go as far as to suggest for it to be banned. According to them, exposure to violent video games causes people to become more aggressive and less empathetic. In the article, Violent Video Games, Externalizing Behavior, and Prosocial Behavior: A Five-Year Longitudinal Study during Adolescent, it mentions that “because video games are interactive, some researchers have suggested that video games may be more likely to influence outcomes such as aggression and decreased empathy than more passive media” (Coyne, et al.). Meanwhile, those in support of violent video games believe that those who oppose this form of entertainment are simply fear mongering and completely disregarding the benefits that come with playing violent video games, such as increased reaction times, being more analytical, and many more. This topic has been proven to be in the grey area, and it doesn’t help smooth things over when the studies and research conducted on violent video games tend to also be very biased and divided as well.

One of the main arguments that Anti-violent video games advocates rally on is how the aggressiveness shown in several violent games can have a negative impact on children and adolescents. Some researchers have gone as far as to suggest that “impressionable adolescents may be driven to brutality by the violent fantasy world of video games that they immerse themselves in” (Kuo). With this suggestion, more and more parents have started to become wary of allowing their children to play such games, especially since violent games are starting to become more mainstream and accessible around the world. Because of how violent video games support and reward dangerous behaviors such as stealing, kidnapping, and even murder, it causes kids to become desensitized to those kinds of behaviors and essentially see it as “no big deal”. Since these children are young and impressionable, the actions that they witness in these games start to transfer over to the real world, thus setting them onto a path of aggression (Teng, et al).

Those who oppose violent video games also claim that violent video games cause a decrease of empathy in the player. As previously stated, the player becomes desensitized to the violent behaviors exhibited in the game, thus becoming less empathetic towards similar issues in real life. In the academic article, Acting like a Tough Guy: Violent-Sexist Video Games, Identification with Game Characters, Masculine Beliefs, & Empathy for Female Violence Victims, it focuses on how men who play video games that depict objectification and violence onto female characters caused them to develop sexists views and become less empathetic towards actual female violence victims. In their research, they “found that participants’ gender and their identification with the violent male video game character moderated the effects of the exposure to sexist-violent video games on masculine beliefs.” Plus, they discovered that their “results supported the prediction that playing violent-sexist video games increases masculine beliefs, which occurred for male (but not female) participants who were highly identified with the game character” (Gabbiadini, et al). Obviously, not all men who play video games with female characters will harbor sexist thoughts. However, those who related and identified more with the aggressive male characters were more likely to develop masculine views.

VVG (Violent Video Games) supporters also believe that those who are against violent video games simply do not understand what they are talking about. To go more into detail, VVG supporters believe that AVVG (Anti-Violent Video Games) supporters base their opinions from their feelings rather than from research or experience. Many AVVG supporters hardly play violent video games, so it makes no sense for them to form these beliefs on something that they themselves do not comprehend. If parents truly feared for their children becoming more aggressive and violent, they should look more into their own parenting rather than blaming a game for their child’s behavior. AVVG supporters tend to overlook the positive impacts that come with video games. Just like everything else, violent games, or just regular old video games in general, should be played in moderation. “Video games…can help a young teen develop a greater sense of self and help to hone problem-solving skills.” Furthermore, “Games that offer an “open world” concept are particularly good for developing better problem-solving skills, say gaming enthusiasts. Research has also found that video games can help with visual perception, and may also help kids develop task management skills, particularly multi-tasking” (Kuo). However, with research that support claims from both sides of this issue, there hardly seems to be an attempt at finding a middle ground.

Everyone on both sides of this topic believe that they are correct and harbor the true answer to this question. Yes, it is true that violent video games can in fact have a stronger impact on the youth, thus potentially triggering aggression in them. However, there is also no denying the benefits that it can being, such as the enhancement of analytical, social, and even motor skills. At this point, there is nothing that can stop the worldwide spread and growth of video games. Thus, with that being said, instead of blindly and stubbornly advocating for one side of this issue, we should all bring ourselves outside of our echo chambers and consider both the positives and negatives impacts that these interactive games can add onto our lives and our actions.

Are Violent Video Games Good or Bad for You?. (2021, Mar 01). Retrieved from https://papersowl.com/examples/are-violent-video-games-good-or-bad-for-you/