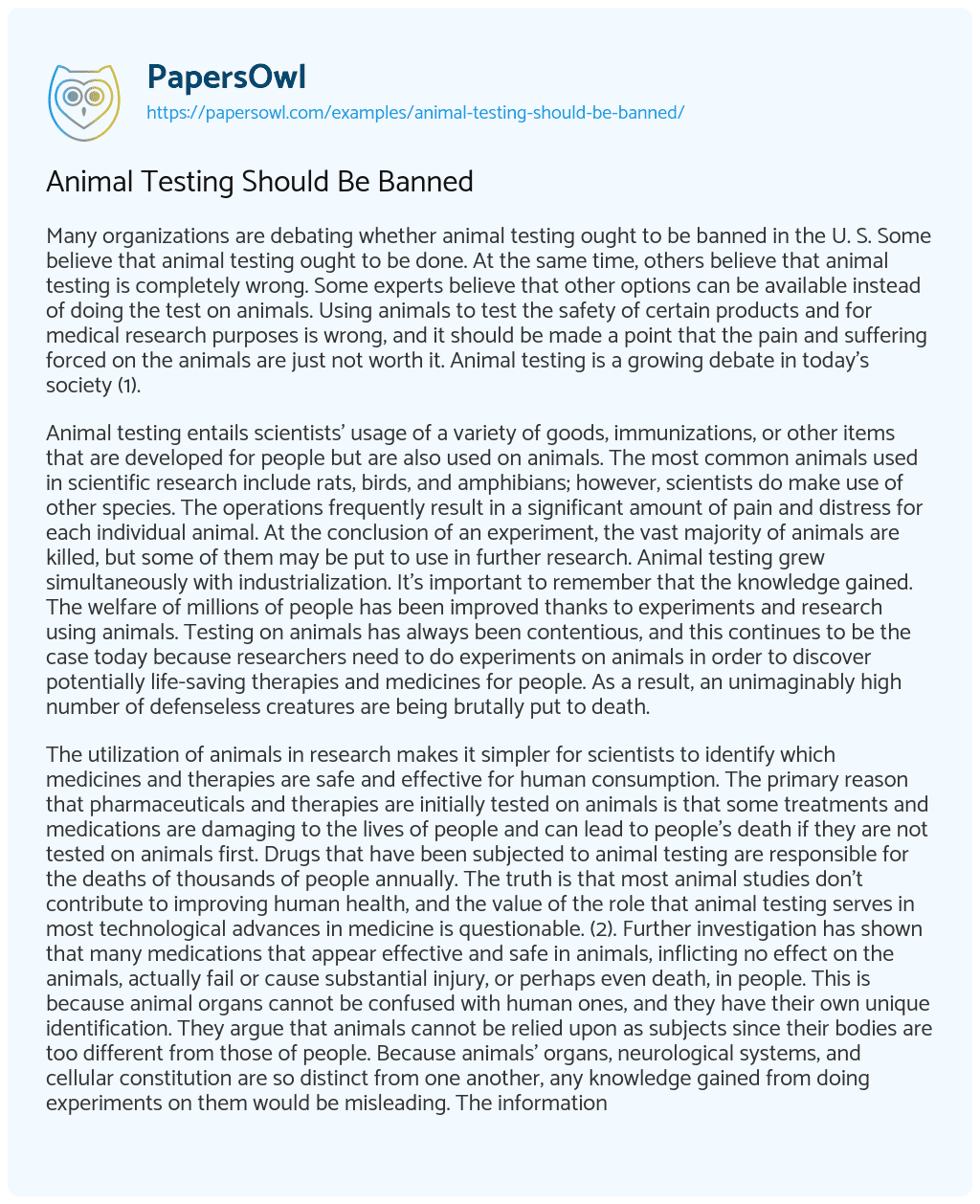 Animal testing entails scientists’ usage of a variety of goods, immunizations, or other items that are developed for people but are also used on animals. The most common animals used in scientific research include rats, birds, and amphibians; however, scientists do make use of other species. The operations frequently result in a significant amount of pain and distress for each individual animal. At the conclusion of an experiment, the vast majority of animals are killed, but some of them may be put to use in further research. Animal testing grew simultaneously with industrialization. It’s important to remember that the knowledge gained. The welfare of millions of people has been improved thanks to experiments and research using animals. Testing on animals has always been contentious, and this continues to be the case today because researchers need to do experiments on animals in order to discover potentially life-saving therapies and medicines for people. As a result, an unimaginably high number of defenseless creatures are being brutally put to death.

The utilization of animals in research makes it simpler for scientists to identify which medicines and therapies are safe and effective for human consumption. The primary reason that pharmaceuticals and therapies are initially tested on animals is that some treatments and medications are damaging to the lives of people and can lead to people’s death if they are not tested on animals first. Drugs that have been subjected to animal testing are responsible for the deaths of thousands of people annually. The truth is that most animal studies don’t contribute to improving human health, and the value of the role that animal testing serves in most technological advances in medicine is questionable. (2). Further investigation has shown that many medications that appear effective and safe in animals, inflicting no effect on the animals, actually fail or cause substantial injury, or perhaps even death, in people. This is because animal organs cannot be confused with human ones, and they have their own unique identification. They argue that animals cannot be relied upon as subjects since their bodies are too different from those of people. Because animals’ organs, neurological systems, and cellular constitution are so distinct from one another, any knowledge gained from doing experiments on them would be misleading. The information gained from these tests would be of little benefit to humans, in addition to being extremely harmful to the animals involved (3).

Drug testing on animals serves no practical use for science. It breaks my heart to see animals being forced to perform behaviors they don’t comprehend. Using animals in experiments is a cruel and unfair activity that has bad outcomes for everyone concerned. Diseases that affect humans, such as heart disease, numerous types of cancer, HIV, and others, cannot be passed on to animals. Experimental results in animals cannot be extrapolated to human behavior because of essential differences in morphology, physiology, and metabolism. They disagree with the concept of animal rights and believe that humans have no moral grounding in exploiting animals for material gain (4). Some of these defenseless animals are killed by being smothered by poisonous gases, being paralyzed in restraints for long periods of time, having holes punched in their skulls, having their skin scorched off, or having their spinal cords crushed. It’s cruel and pointless to test on animals. Unspeakable things can happen during the testing. One method is to slowly drip the substance under test into the eye of a rabbit until the animal’s cornea corrodes. One such method requires killing off at least half of the animals fed the component of interest (5). There is a heated discussion happening right now in the U. S. over doing tests on these poor, defenseless animals.

Costing more money and wasting resources, animal testing is unnecessary. There’s also the fact that it’s pointless to do so. Due to their inaccuracy and inability to predict the complete range of negative effects, animals are horrible test subjects for a chemical’s safety. Animals should have legal protection from this kind of abuse. In many instances, medical discoveries are delayed as researchers vainly waste time, money, effort, and animal lives trying to create an animal model of human disease (6). Animal testing generally costs enormous amounts of money, as the animals must be fed, cared for, housed, and treated with drugs or a similar experimental substance. Additionally, the price of the animals themselves must also be paid for. There are companies in the United States who actually breed animals specifically for the cause of testing, and animals can be purchased from them as well. Not only is this research cruel, but the billions of dollars wasted on animal studies funnels money away from human-based research that entails computer modeling and tissue cultures that could be helping people (5).

The use of animals in experimenting with human-based products has been debatable for a while now. It should be noted that sometimes the benefit of successful animal research is. However, it is important to acknowledge that each animal undergoing the process endures agony and death, no matter the final result. Both animals and humans have the capacity for emotion, cognition, behavior, and the feeling of physical pain. However, animals are afforded a certain respect as humans. Animals’ rights are violated when used in research because they are not given a choice. They just put straight under the penalty of an experiment for the health of humans. Humans cannot make life better for themselves by torturing and executing so many animals each year to perform laboratory experiments or to test products on them.

Animal Testing Should Be Banned. (2020, May 13). Retrieved from https://papersowl.com/examples/animal-testing-should-be-banned/