An Issue of Social Media and Cyber Crimes 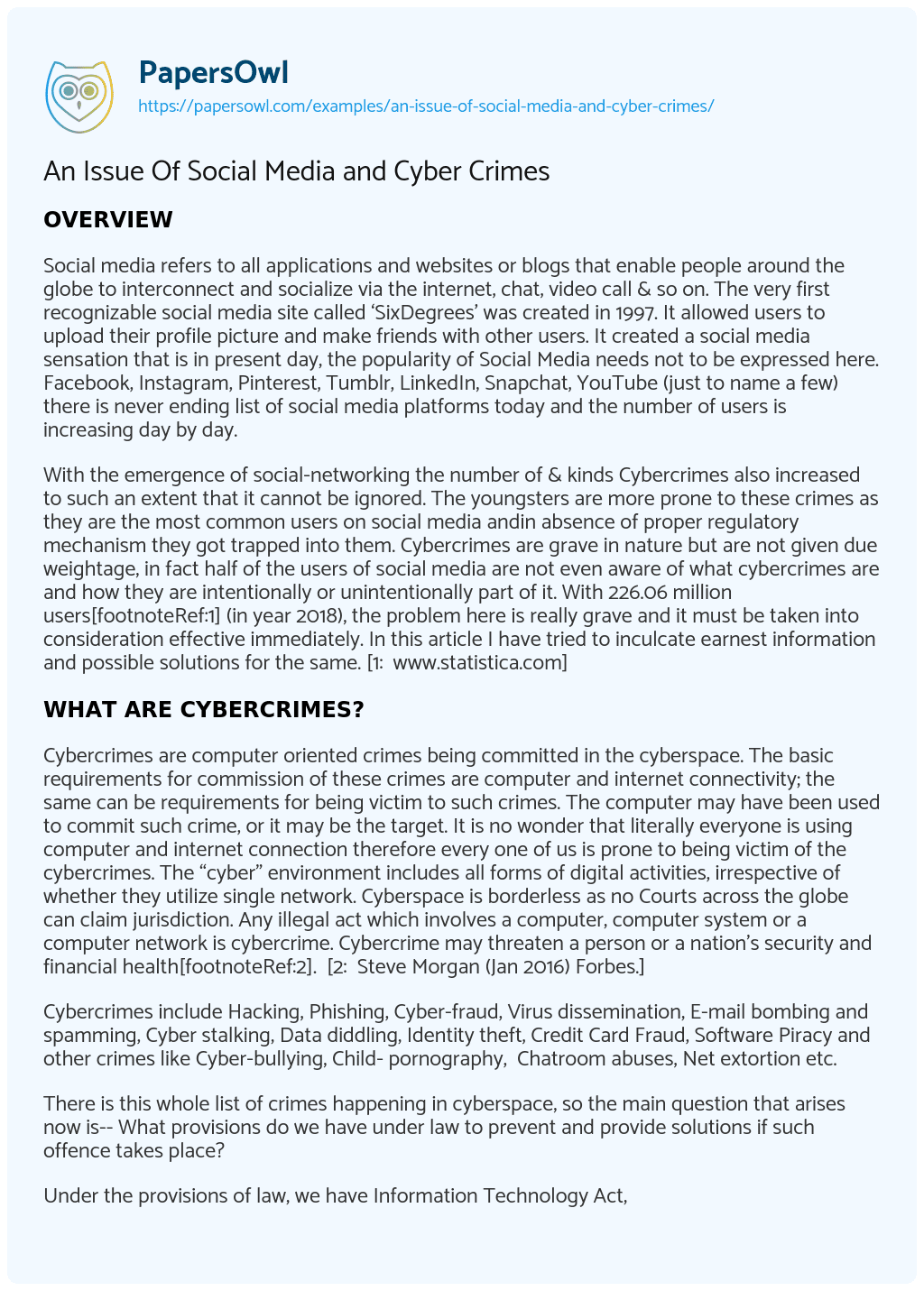 Social media refers to all applications and websites or blogs that enable people around the globe to interconnect and socialize via the internet, chat, video call & so on. The very first recognizable social media site called ‘SixDegrees’ was created in 1997. It allowed users to upload their profile picture and make friends with other users. It created a social media sensation that is in present day, the popularity of Social Media needs not to be expressed here. Facebook, Instagram, Pinterest, Tumblr, LinkedIn, Snapchat, YouTube (just to name a few) there is never ending list of social media platforms today and the number of users is increasing day by day.

With the emergence of social-networking the number of & kinds Cybercrimes also increased to such an extent that it cannot be ignored. The youngsters are more prone to these crimes as they are the most common users on social media andin absence of proper regulatory mechanism they got trapped into them. Cybercrimes are grave in nature but are not given due weightage, in fact half of the users of social media are not even aware of what cybercrimes are and how they are intentionally or unintentionally part of it. With 226.06 million users[footnoteRef:1] (in year 2018), the problem here is really grave and it must be taken into consideration effective immediately. In this article I have tried to inculcate earnest information and possible solutions for the same. [1:  www.statistica.com]

Cybercrimes are computer oriented crimes being committed in the cyberspace. The basic requirements for commission of these crimes are computer and internet connectivity; the same can be requirements for being victim to such crimes. The computer may have been used to commit such crime, or it may be the target. It is no wonder that literally everyone is using computer and internet connection therefore every one of us is prone to being victim of the cybercrimes. The “cyber” environment includes all forms of digital activities, irrespective of whether they utilize single network. Cyberspace is borderless as no Courts across the globe can claim jurisdiction. Any illegal act which involves a computer, computer system or a computer network is cybercrime. Cybercrime may threaten a person or a nation’s security and financial health[footnoteRef:2].  [2:  Steve Morgan (Jan 2016) Forbes.]

There is this whole list of crimes happening in cyberspace, so the main question that arises now is– What provisions do we have under law to prevent and provide solutions if such offence takes place?

Under the provisions of law, we have Information Technology Act, 2000 & The Information Technology (Amendment) Act 2008 which deals with the cyber related issues in India. The former Act is based upon UNCITRAL Model recommended by General Assembly of United Nations. The Act defines and deals with cybercrimes and prescribes penalties for them, along with this, it also established Cyber Appellate Tribunal (CAT) to resolve cyber related disputes. The latter Act was the major amendment and introduced new provisions which penalized sending of offensive messages, child pornography, cyber terrorism and voyeurism.

The Act expressedly deals with the serious cybercrimes like Hacking, tampering with computer sources or data, Cheating using computer, using password of another person, publishing any obscene content or sexual acts, cyber terrorism, publishing child pornography online, misrepresentation etc. Though the provisions under law seem to be effective and almost cover every related aspect of the cybercrimes but records of redressal of cyber grievances provides otherwise.

According to the data released by National Crime Records Bureau (NCRB), more than 12,000 cases of cybercrimes were reported in 2016 & nearly same number of such cases has been carried forward from the previous year, that is 2015 and they had not been investigated. Only in 30% cases reported in 2016, the police or investigation agency filed a charge sheet. The data of 2017 & 2018 is yet to come. With these perturbing numbers, the present scenario of cyber laws appears dark.

Next question that arises is – What possibly could be the reason for non redressal of these cases?

The answer is quite simple; the insufficiency of IT Savvies in investigation department. It clearly indicates the condition of cybercrime grievance redressal. The area is still in its infant stage and it seems like government, being a guardian is not able to provide proper nourishment to that. In addition to that, the implementation of IT Act also is a matter of consideration. The loopholes of 2000 Act has been dealt in Amendment Act of 2000 but its proper implementation still lacks.

Cybercrimes are being aided by social media because it is a platform which provides not only better connectivity but also details of the users. With the easily availability of details of user the cybercrimes like identity theft are very easy to commit. There is adverse impact on privacy as we are sharing more than required details on social media which can be misused by any person who has access to watch them. Privacy infringement on social media platforms is quite big if privacy settings are not properly set by the user or if user is not aware of such settings.

Anonymity and fake identity are the hallmark of the cybercrimes. Social media is largest platform from where offences like identity theft are being done in large number. Lack of awareness among citizens, poor security features associated with these websites and overuse of social media has enabled cyber offenders to engulf these innocent people into fraudulent or any other criminal transactions.

Not only this but people are falling in trap of fake messages and videos getting viral on such networks and there is whole new trend of sharing and even challenging other person through social media to perform any challenges. This has taken witless face and youngsters are so much influenced that they are actually performing them. Kiki challenge, blue whale game, momo challenge are few to name. These trends are not only gullible but also fatal. Therefore, it s high time when there is a need of regulating body which must prevent these acts on social media. IT Act, do have provisions for grave cybercrimes like child pornography, publishing of obscene material and so on but the Act is so unclear as to determination of jurisdiction of such crimes.

In the nutshell, social media undoubtedly has changed our lives by connecting people over the globe, efficiently than ever but on the dark side it has given birth to such offences which were inconsiderable and unimaginable before the popularity of social media. However, cybercrimes do not always arise from these platforms and there are various other things in cyberspace which are responsible for them but social media directly or indirectly aided cybercrimes and there is strong need to keep check on them. Being an aware citizen it is duty of us to limit our lifestyle on social media, perform safe transactions, avoid scam texts and e-mails and educate people around us for the same. After all, prevention is always better than cure.

An Issue Of Social Media and Cyber Crimes. (2019, Nov 01). Retrieved from https://papersowl.com/examples/an-issue-of-social-media-and-cyber-crimes/

Cyber Security and how to Prevent Cyber Crime

The Real Issue Behind Cyber-Security